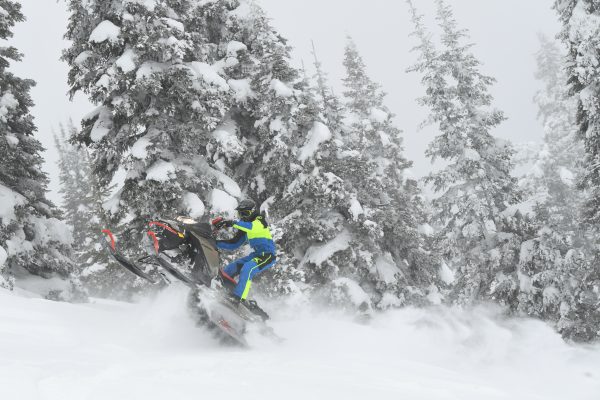 It is official, we have dueling turbo 2-stroke mountain sleds, direct from totally separate OEMs! Sure, we’ve had plenty of 4-stroke turbos in the past, but nothing like the 2-stroke technology we see in the all new Polaris 850 Patriot Boost Pro RMK Matryx Slash, and the Ski-Doo Summit X with Expert package with 850 E-Tec turbo. These are the sleds that you thought you’d never see produced in mass quantities from the manufacturers… and the things they can do are mind boggling!

Both Polaris and Ski-Doo offer their versions of an 850 2-stroke turbo in several configurations, but for the sake of this editorial, we focused on the 163-inch long Pro RMK with 3-inch paddle, and the 165-inch long Summit X with 3-inch paddle. Both are very similar in how they’ll appeal to you if you are a buyer in the decision-making process… but the two sleds have plenty of differences to explore too! And you can explore basically anywhere your heart desires with these monster turbos! 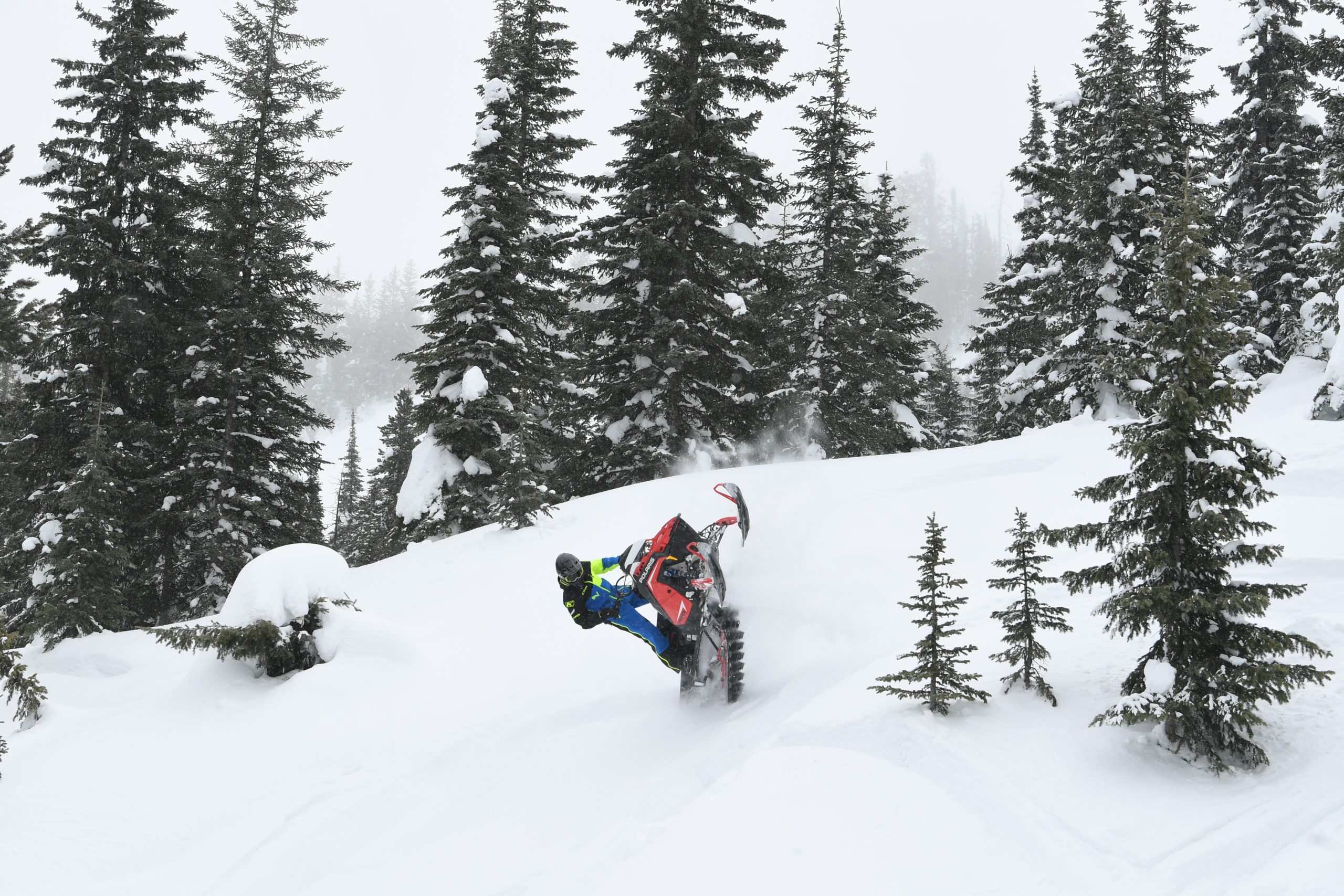 Many deep snow lovers have prayed that this day would come, the day when we have the second biggest OEM in the sled biz, stepping up to the plate and building sleds to compete (or beat) Ski-Doo at literally every level. The boosted 850 Patriot motor is just the next step, and shows that Polaris is getting very real with not only its chassis, but motor development too. This was not some slapped together turbo, it was built alongside the 850 naturally aspirated motor throughout its progression. Looking at how over-built the Patriot 850 was from the time it was released, many folks had a good idea that a turbo was coming too… it was just a matter of time.

The new turbo utilizes what Polaris calls ‘SmartBoost’, which is a patent-pending combustion control system to provide more boost and more controlled boost. Up to 9 psi of boost is equates to a roughly 50% increase in power versus the naturally aspirated 850 Patriot motor at 10,000 feet of elevation. That is pretty incredible, and this sled is definitely a wild child that you have to hold on to, especially if you jump from a standard 850 to this. You will be able to point the skis to the sky with the flick of the throttle, and it runs on 91 octane pump gas.

Obviously, a lot is different with this turbo versus the standard 850 in order to handle the boost, including new crank seals, new piston with special alloy, and new geometry, new flywheel, new ECU with hardware for the SmartBoost system, and more. The throttle body is similar to what was used on last year’s snocross race engine. There are more changes here, like additional injection for more fuel to feed the turbo motor. New intake and carbon fiber petal reeds were custom designed with MotoTassinari for use in this specific boosted sled. There’s also a new P22 clutch and calibration plus a new idler bearing, which takes away the need to make belt deflection adjustments.

The new turbo is small, lightweight, and vertically mounted just above the exhaust can on the Matryx. There’s a patent pending exhaust and wastegate system on this 2-stroke turbo as well. Much was done with the packaging, dedicated oil pump, heat shielding and more, to fit this very efficient, and hopefully reliable power, providing add-on into the space available and to provide maximum airflow and cooling. The high tech wastegate allows the rider all the power, and almost the feel of a naturally aspirated power delivery. After riding it for just a few minutes at 8-10,000 feet elevation though, you certainly know you are on a 2-stroke turbo! 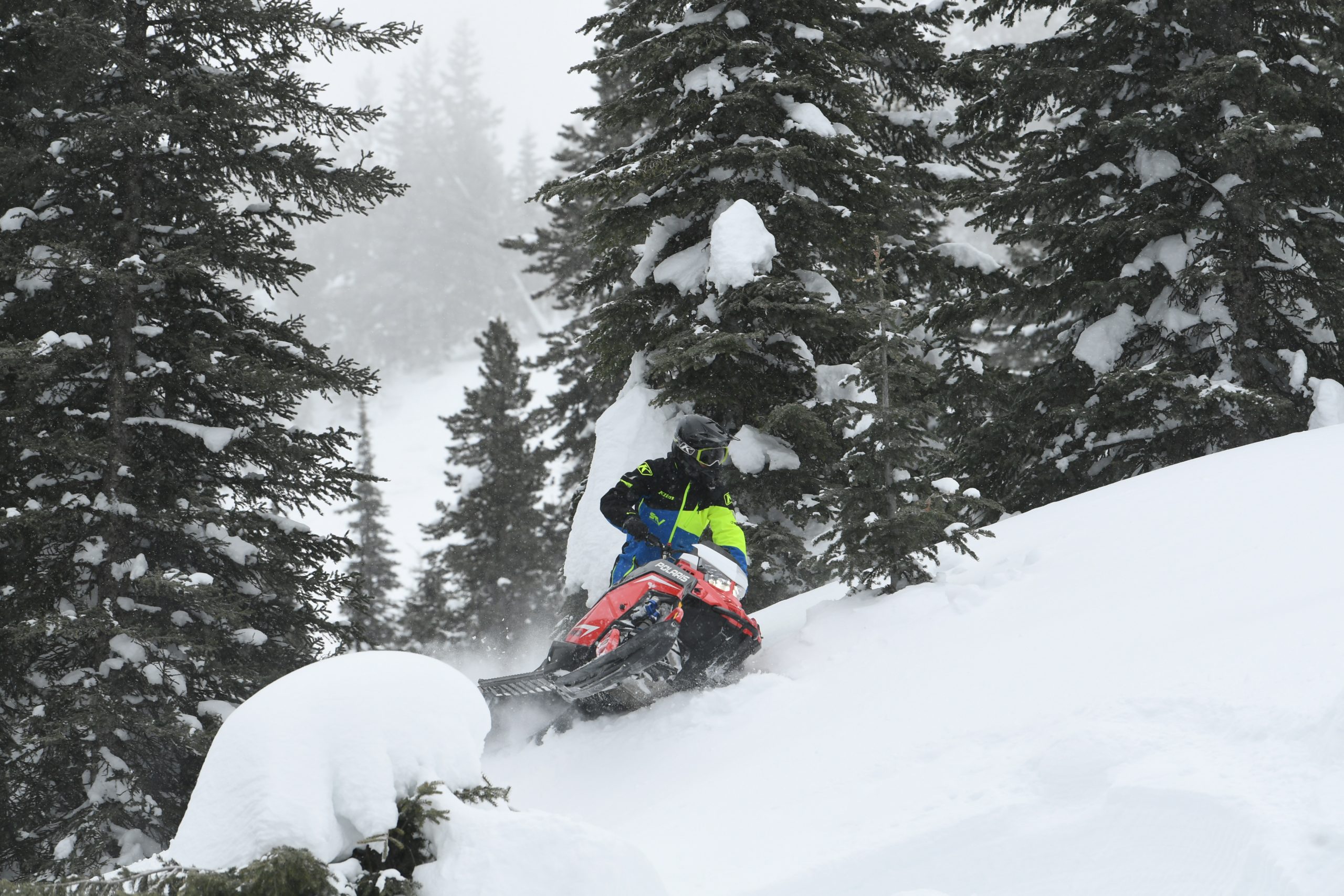 It’s not only the motor, but also the full Matryx Slash platform that makes this sled so much fun to ride. There’s a refined cockpit with narrow seat and tank with tons of space to move quickly from side to side. The tunnel is shortened, tapered and a one-piece design for strength, plus the flickability and feel of a shorter sled. Plus, there’s a new central, lightweight, well designed cooling/heat exchange system in the tunnel.

Powdertrac XT running boards under your feet are spacious, evacuate the snow extremely well, and allow for great movement up, down, and side to side. You can customize your storage options in back with the Polaris Lock and Ride system which rivals the Ski-Doo LinQ system with ease-of-use and accessories. There’s a small windshield that can easily be removed without using tools, and below that is one of our favorite features on Polaris sled.. the Night Blade LED headlight. You can see farther, wider, and more variations in the terrain in even flat light scenarios.

Changing the React suspension to fit your style is easy, whether dialing in the WER Velocity coil-over shocks, or setting your ski-stance from 36 to 38 inches, you have a lot of customization up front. In the rear skid, there are the same WER Velocity shocks to take the hard hits and bumper-dragging wheelies. And you can do those wheelies for days with the 163-inch long Series 7 track with big ol’ 3-inch lugs on it.

From a rider’s standpoint, the biggest thing we noticed was how quickly you could make new decisions, in real-time while riding. This sled is forgiving, comfortable, but most of all, crazy-maneuverable and lightweight. Much of that is due to reduced drag in the snow, and a lot of small changes to cut weight, and precision tune every aspect of the sled from bumper to bumper. From forged A-arms to the small snow-flap, really nothing was missed, and you just gotta slam the throttle a couple of times in a meadow to really hear that 2-stroke turbo motor sing! 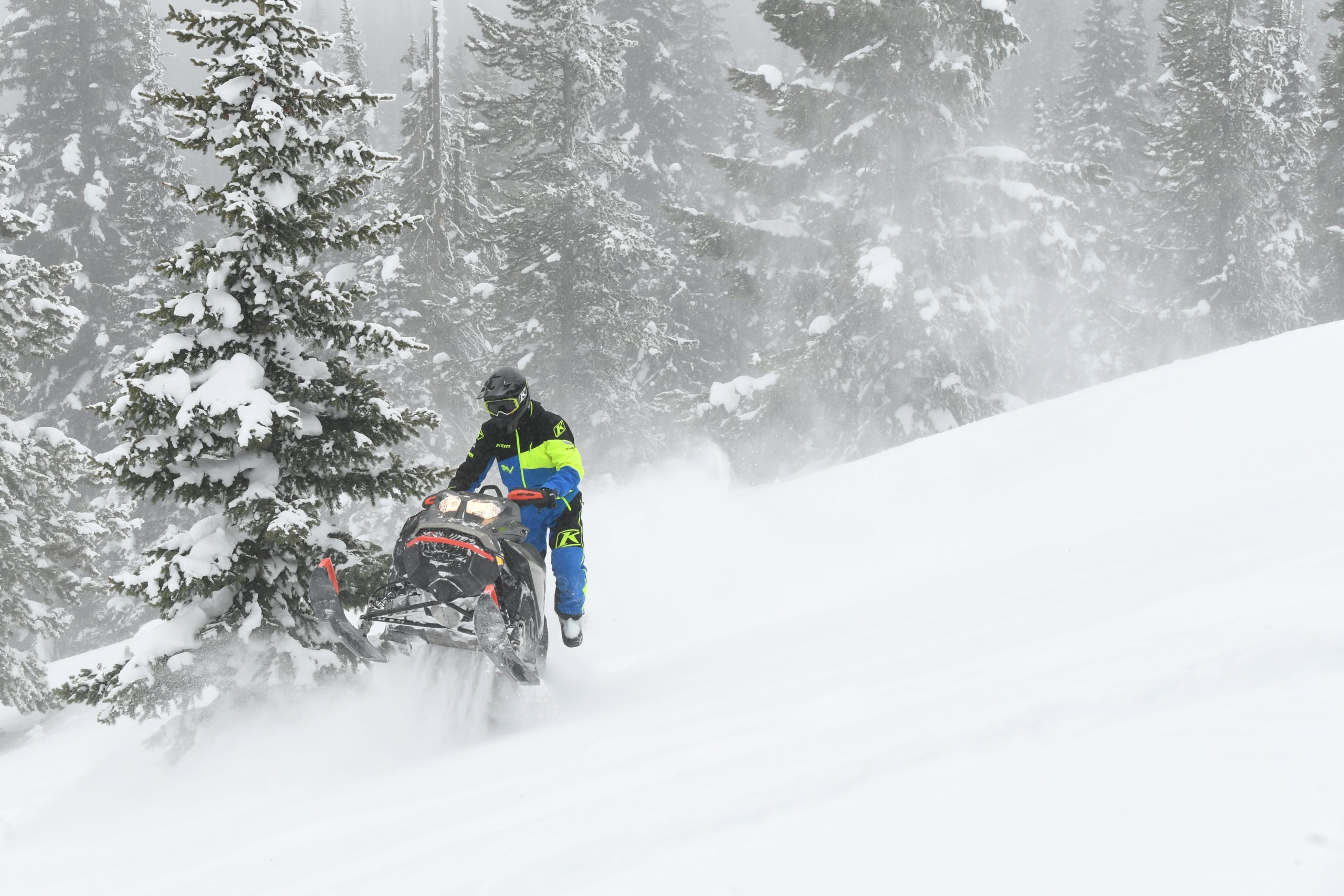 The sled that Polaris was trying to catch with its new Matryx Slash Turbo is the Ski-Doo Summit X with the Expert package, and with the 850 E-Tec turbo. It’s a hard sled to match! Coming in either triple black or the liquid titanium and carbon black color schemes, the X looks like it means business, even before you get it out of the trailer.

The first OEM with a 2-stroke factory turbo in the mountains, Ski-Doo has a leg up on the industry with their 850 E-Tec turbo. This turbo works a little differently than the new Polaris one though, and uses boost to maintain roughly 165 hp all the way up to 8,000 feet elevation. The liquid-cooled, direct injection turbo runs on pump 91 octane fuel, and if you’re doing the math, this turbo produces roughly 40% more power than the naturally aspirated 850 at 8,000 feet. Oh, and this turbo was the first OEM sled on the market with a warranty. That means the engineers did their homework because the bean counters would never let that fly without the engineers standing firmly behind it.

For each 1,000 feet of elevation that you go up, and oxygen levels continue to go down, you lose approximately 3% of your power. The ECU monitors changes as you go up in altitude and the electronic wastegate, so in lamens terms, the system provides the amount of boost necessary (up to roughly 4 PSI max) to keep the engine at its sweet spot of 165 hp. Since the system is limited to 4 PSI after 8,000 feet, power does start to drop off at the same rate as an NA system, but you are still getting A LOT more power at the higher altitudes than that of the standard 850.

This is a small-sized turbo as well when you look at it, and it’s packaged neatly with the compressor to fit into the Gen 4 chassis. Intake, exhaust, and a continuous oiling system were all designed not only for performance, but also weight distribution, to keep everything balanced with the rider in mind. That being said, it might be the smoothest, most seamless 2-stroke turbo we’ve ever ridden… OEM or aftermarket.

The Summit X with the Expert package is more than just a turbo as well, and new for the 2022 model year is a 34-inch narrower ski stance. The narrowed up-front end allows you to initiate a carve more easily and get the sled on edge with even less effort. Just like when other narrowed up mountain sleds were first released, this takes a little getting used to, and with the extra power of the turbo some riders might over-correct right out of the gate… but that’s a very quick and easy learning curve. The stability and predictability of the Gen 4 chassis allows folks to feel confident, even with this added maneuverability.

Above the Pilot DS3 skis, in the RAS 3 front suspension, you get HPG plus shocks with the newer lightweight coils. In the rear tMotion suspension, you also have the same shock and springs in the center, but the rear shock is a KYB Pro 36 with easy-adjust clickers, and you get ice scratchers standard, as well as an adjustable limiter strap. There is a shorter tunnel with a lightweight tiny snowflap as well. Certainly, everything on this mountain sled has been sliced and diced to cut weight, including the new last-year, lightweight hood.

We will also keep beating a dead horse here when we say how impressed we are with the SHOT ultracapacitor starting system. Lightweight, easy to use, and an endurance saver in high altitude. As a guy that rides out west several times a year, but comes from sea level each time, it is a godsend to not have to pull that rope a bunch, after I’ve dug out a sled. Basically, you pull the rope once or twice on initial start-up at the trailer in the morning, and then you have push-button starting literally all day.

Other small things that I appreciate are the slightly narrower diameter bars, plus a low 4.7-inch riser. Personally, as a shorter rider, both these things really save on needless expended energy. Seemingly forever, people believed that big, high handlebars were the way to go, but they honestly hinder the geometry of the sled, and your ability to make quick movements, as well as decrease your connectivity with the machine.

The tiny, lightweight seat is not much for comfort or aesthetics, but it is easy to jump over and get a leg around… again, especially for us vertically challenged little people. At just 468 pounds dry weight, with the turbo, this 165-inch (Powdermax light 3-inch lug) machine has just an incredible power to weight ratio. It absolutely churns the POW, flies straight, and is still one of the better sleds to ride on the trail, until you choose to venture off. 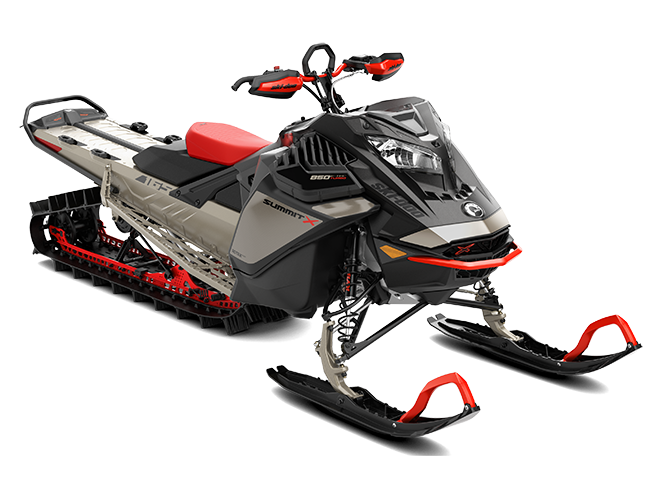 I often ask riders what they REALLY ride most often. When it comes to mountain sleds, do you like riding in the trees, jumping cornices, picking the most technical lines, riding super deep POW? These two sleds can really do all of that, so that discussion is moot with them. However, if you are not a more ‘expert’ type rider, you probably do not need all the incredible go-juice these two have to offer. I’m not talking anyone out of buying one, but these two are both absolutely wildly awesome fun to mash the throttle on!

If you are that guy or girl who craves a challenge, then I think the new Polaris turbo will give you all you desire. The Summit is slightly more tame, but does not falter when pushed to the limit. So what is your end-game? If I was my 27-year-old self, it would be the Matryx Slash turbo all day long, but it is this Polaris turbo’s first year, and I’ve got more time on the Summit X, so I feel more comfortable there. So far, I’ve only seen a small handful of riders who can take either of these sleds to their full potential, so if you are in the market, the question is… do you want the extra HP or not? 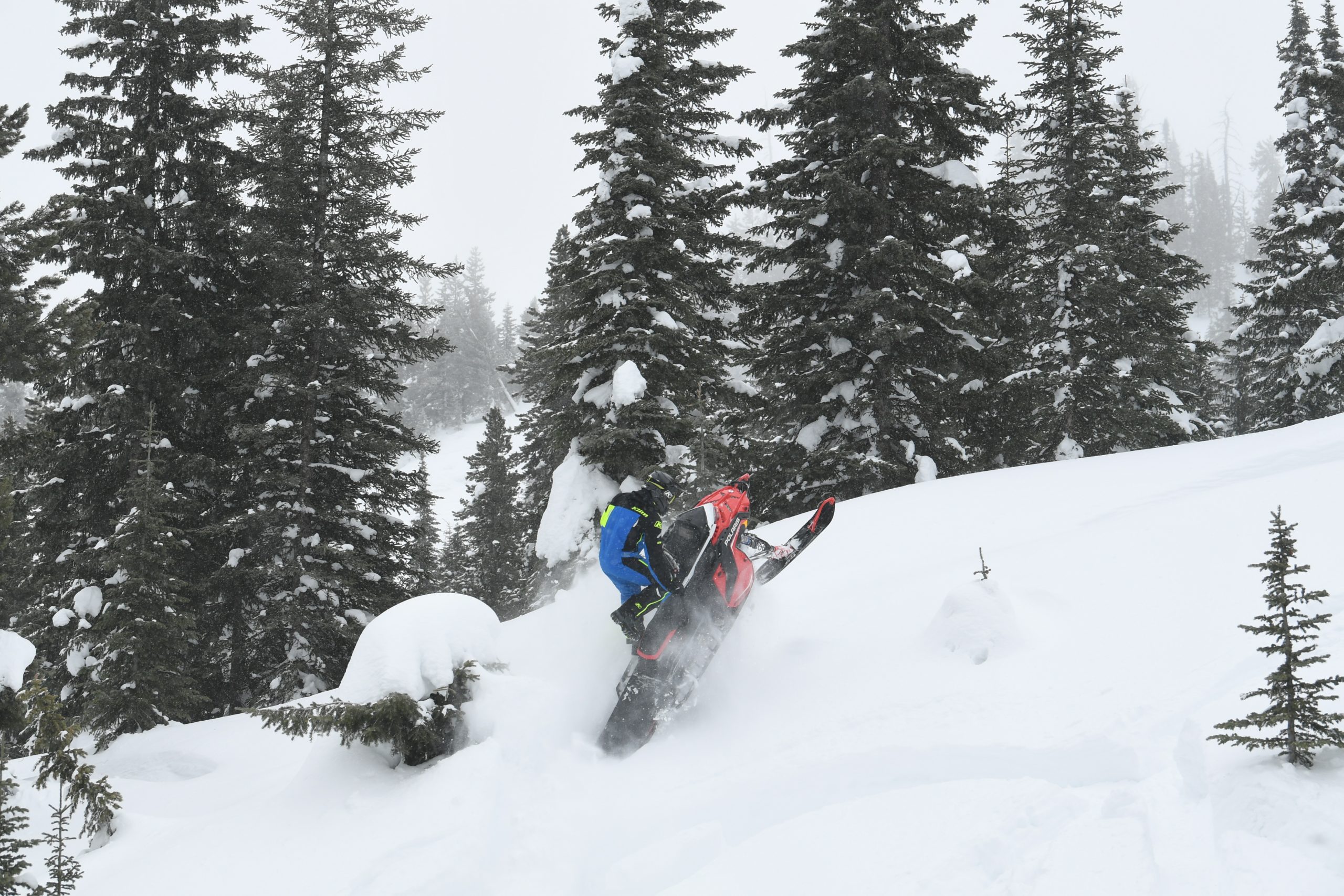