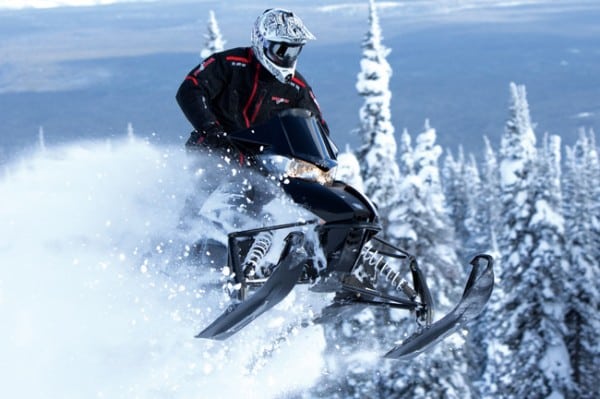 Hear ye all, assembled for today’s lesson. Whether stout believer in the Arctic Cat history, or skeptic of the lofty claims you’ve been hearing, reading and repeating – take heed to what cometh. Cat’s striking, new Procross chassis is across its performance segment, which means the aged (by today’s standard) Crossfire machines are only available as non-currents. The new-for-’12 XF series is the Crossfire successor, and the premium package, in LXR trim in this script, is a crossover machine that will have mass appeal.

While the engine is the returning (and bulletproof) 1056cc parallel four-stroke twin, it breathes new life sitting in the significantly lighter XF chassis. In the power to weight game, we think things have improved some with the 125 or so horsepower, dragging fewer pounds. Cat is not necessarily open-book about its weight figures, especially on these first year production sleds. We know by comparison that the F series is 50-some pounds lighter than the Twin Spars they replace, but no word on savings comparing XF as replacer to M-based Crossfires.

The driveline is said by Cat engineers to bring about some new efficiency. As stated in previous OSMs, the traditional chain/gear driveline is not old technology, with its fixed center distance and Torque Control Link. Less friction, therefore less drag is the claim. Perhaps it was us feeling like we were riding the new Holy Grail of sleds – this is a long sermon just to tell you that the new 1100 four stroke feels like it has new life with a healthy bit of bottom and mid-range torque that pulls smoothly to full shift-out.

Its striking appearance draws attention like the burning bush itself. Its attractive, styled lines and body cladding are available in black, green, or a limited version in white and orange, if you were quick to worship and purchased in the spring.

Sitting under the XF LXR luxury packaging is a 141-inch Cobra track with 1.25-inch lugs. It’s a good match for the power and the machine has overall balance and footprint enough for the occasional exodus off the trail into deeper white brilliance. A center grab strap is there for drivers to have added leverage for maneuvers that test faith.

The pulpit from where a rider will bear witness to all those seekers of more information – and they will be asked questions about how it rides and handles – is a comfortable place from which to sing its praises. Ergonomics are refined and shaped around a driver in a way that meets requirements of modern sleds: sit down/stand up, rider forward with careful attention to comfort. The front of the seat is tapered for easy maneuvering, and the two-piece tapered tunnel has a narrow topside that makes it easier and more comfortable to straddle.

Like the other Procross sleds, the front suspension is entirely new and steers predictably, in part due to the super-tall spindles. We like it. The rear is the returning FasTrack skid with several clever updates for durability and just-plain better engineering.

A sled with this much new is hardly evolution – why, some may think the mere suggestion is blasphemy. And it’s the sum of the new parts that make us believe it’s born again.