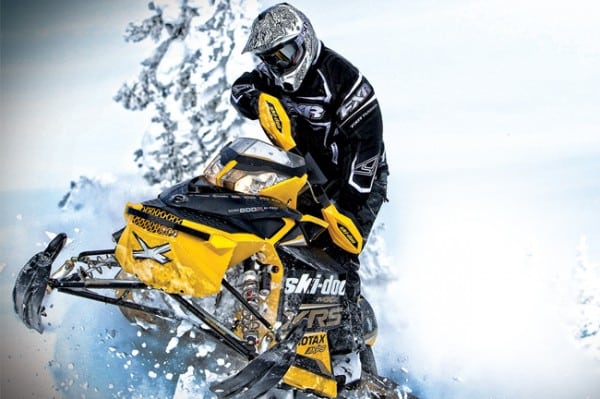 In the previous edition yours truly said the 2011 Ski-doo MXZ X-RS was a machine for wannabe tools. Upon close examination, it’s easy to understand why the Ricky Bobby of trails near you would be compelled to fork over $13,249 U.S./$14,999 Can. (800 E-TEC) for the highest performing, most track-suited sled, currently available. The 2012 version of the XRS even puts suspension adjuster knobs in your face when huckin’ a superman seat grab. Those types of riders are in the target demographic, as are the guys who gain a few miles per hour with each sticker.

But the branding on board the XPS isn’t because a designer was OCD with a vinyl sheet and printer. The machine is meant to look fresh out of the Valcourt, Quebec race shop because it shares the same go-fast parts as the real deal. It just so happens the stickers on this machine actually mean something. Let’s review:

The shocks stay busy, damping the travel of the new rMotion rear suspension and for the front A-arms, too. Ski-Doo claims the most rising rate and progressive ratio in the industry. On this beast though, with the competition-spec valve stack, the ride can be harsh and unforgiving unless you attack the harshest terrain with as much speed and force as possible. The big adjuster knobs for the rear come into play for dialing in the level of spring pre-load and rear shock compression damping. Like the 2011 model, we spent considerably more time with testing during our inaugural ThrowDown (see December OSM). The XRS needs to be driven at race pace to harness the full potential of the chassis.

It’s the official factory oil of Team Ski-Doo, and it’s also uniquely formulated oil for all E-TEC engines. The warnings are in the owner’s manual, and we’ve also heard from third-party oil manufacturers that E-TEC engines aren’t lubricated as well, using other oils, which will impact engine durability. Guess its time to pony up at your Doo dealer for the good stuff.

In either 600 or 800 displacements, each is the gold class standard for blending peak power; rapid response; lightweight packaging; EPA compliance; and mileage.

Bearings have a simple job to keep thing moving, but NSK boasts that its units are more durable and reduce the equipment failures. Race teams hate using products that don’t last in the heat of competition, and NSK is the official bearing of Warnert Racing. Form your own opinion.

Brembo is the source of stopping power, and motorheads the world over know what stops the top performing supercars: Brembo. On the XRS, there is adequate stopping power with terrific ease, but we’re not unified in the belief that Ski-Doo leads the industry in braking feel, despite input via steel braided line.

While there is nothing new about a Camoplast track, propelling sleds to break-neck speeds, there is a new choice available on the XRS. You can find a 2012 Ski-Doo XRS equipped with either the 1.25-inch lug RipSaw, or the Ice Ripper XT track of same lug height with embedded studs. No more scrapped knuckles.

The sum of the parts as noted by decal, as well as the other track-ready goodies like the taller and more forward bars with an over-engine post to quicken steering, etc – is that this is a top performance machine, aimed at the top performance riders. If you’re not an expert rider who can harness what this machine is capable of delivering, stick to the TNT or X, and have a wider range of supple comfort at the tip of the fancy suspension dials.

So, do the decals really add a few miles per hour on this sled? In all honesty, if the rider is one who appreciates the race-ready extras, and can truly utilize their capabilities, it’s likely he’ll school you on an Elan too. J