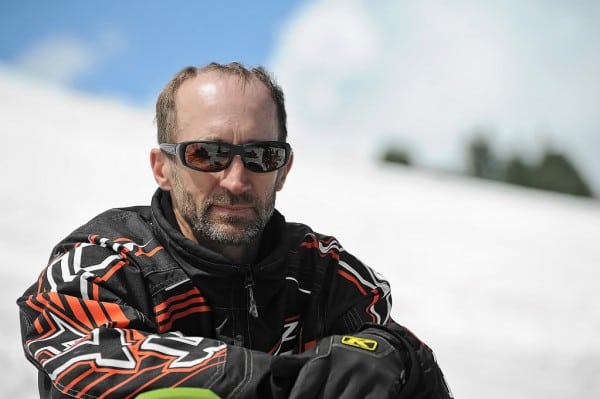 After becoming nearly synonymous with the Arctic Cat brand, Bret Rasmussen has entered into a relationship with none-0ther than Ski-doo. An Idaho native, Bret has practically done it all in the snowmobile world. He has won King of Hill and World Championship titles; was an Arctic Cat dealer for over 25-years; is credited as a co-inventor and patent holder for deep snow snowmobile tracks; served as Western Race Coordinator for Arctic Cat; and most recently has been concentrating much of his efforts on his Ride Rasmussen Style riding schools. The switch to Ski-doo is a bit surprising and a major score for the Valcourt crew. The loss of Rasmussen is the second big name from the west to leave the Cat camp, the other being none other than Chris Burandt who made the jump to Polaris a few years back. We suspect in both cases loyalty was overcome by more money and more product. Here is the official release from the Ski-doo.

Valcourt, QC, August 9, 2012 – BRP is joining forces with Bret Rasmussen and his Ride Rasmussen Style snowmobile riding clinics to use Ski-Doo snowmobiles for all of its activities. Rasmussen is widely recognized as one of the leaders in mountain riding, instructional videos and providing world-renowned clinics for improving a rider’s skills. In the realm of mountain snowmobiling Rasmussen has done it all, from hillclimb racing, managing a race team, forming a race circuit, owning dealerships, to consulting on design and producing instructional videos, his credentials speak for themselves. As a pioneer in the new trend of back country riding, where the challenge has evolved from a conquering the slope mentality, to add elements of challenging your skills on tight and difficult terrain style, he has led the way with techniques like the “wrong foot forward” method many
riders are using today. Currently Rasmussen concentrates on his clinics, videos and seminars spread across North America.

“We’re absolutely thrilled to bring Bret on board with the Ski-Doo team” said Robert Lumley, vice president of Sales and Marketing Ski-Doo and Sea-Doo Division. “His credibility with the mountain community is undisputed, and the confidence he’s demonstrating in our new REVXM platform positions Ski-Doo as the snowmobile of choice for Western riders.”

“Having ridden the 2013 Ski-Doo Summit, I know that they have created a product that has set new benchmarks and will appeal to consumers in the mountain market and meet the needs of the western rider” said Bret Rasmussen. “To be able to work with a great company as BRP is a great occasion, I am looking forward to a relationship that will create opportunities to improve the consumer experience on Ski-Doo snowmobiles. Those who I’ve met at BRP have a vision for the mountain market and are passionate towards this effort. I will reinforce their desire to meet this demand.”

Rasmussen will attend the annual snowmobile season kick-off known as Hay Days on September 8th and 9th in North Branch, Minnesota to visit with riders looking to learn more about the Ride Rasmussen Style clinics. More information and links to the Ride Rasmussen Style clinics website will be available soon on the Ski-Doo website and Elevation blog. For more information on Ski-Doo snowmobiles visit www.ski-doo.com