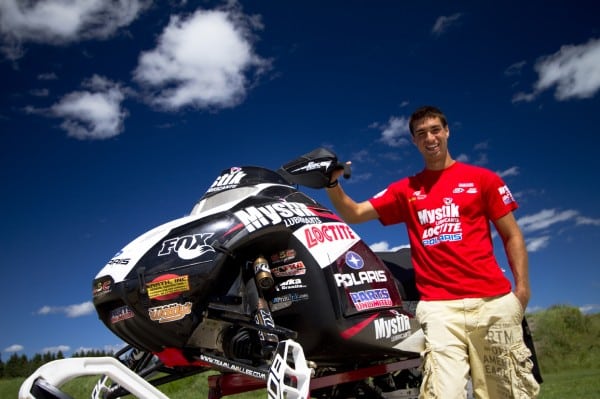 Coming just days after we learned long time western Cat guy Bret Rasmussen was trading in his Minnesota claws for Canadian yellow, another Arctic Cat rider is on the move, this time to Polaris. Levi LaVallee and company announced that young pro snocross racer Kyle Palin will be joining his team for the upcoming season. Palin is a likeable young man, and has shown moments of speed during his first year on the pro tour. While he has yet to repeat the podium strength he demonstrated in the Pro Lite ranks, Palin is still young and Team LaVallee is hoping there is more speed to be found in the coming season. Here is the official word from the Longville crew:

Longville, MN (August 10, 2012) – Team LaVallee is excited to welcome Pro Rider, Kyle Pallin to their roster for the upcoming 2012-2013 snocross season. Pallin, 21, originally from Ironwood, Michigan will be going into his second season as a Pro rider. Pallin has a strong racing history in the Pro Lites class and had an awesome rookie season as a Pro last year.

“We are excited to bring Kyle onto our team this season. He is a young, great rider with a real like-able personality. With this determination and strong work ethic, I think he will be a great fit for our team.” states Levi LaVallee (co-owner to Team LaVallee).

Pallin, who has been known for his endurance on the track, has been using the off-season to train in Chicago. In early September, Pallin will move to Longville, MN to join LaVallee and Team LaVallee’s Pro Lite rider, Jake Scott to start preparing for the upcoming snocross season.

“We ended on a high note last season with Jake’s Pro Lite win and third overall in points and are hoping to continue that same momentum this year. With the combination of Levi healthy and ready to race, Jake back again, adding Kyle to our team, and the awesome support from our sponsors, I feel we have the key components for a very successful race season.” states Glenn Kafka (co-owner to Team LaVallee).