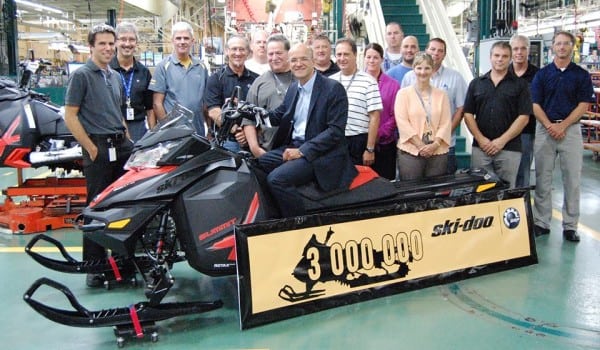 “From design to engineering, to the assembly line via marketing, sales and many more, BRP employees have made this milestone possible by striving for quality, innovative and industry- leading products that continually reinvent the sport,” said José Boisjoli, president and CEO. “I want to thank all of them for their hard work, commitment and dedication over the years, without them, this accomplishment would not have been possible.”

It has been exactly 40 years, day for day, since the millionth snowmobile, a 1974 Ski-Doo T’NT Everest 440 model was produced, and 20 years since the second millionth, a 1994 Ski-Doo Summit snowmobile.
“All our employees, but particularly the ones in Gunskirchen, Austria and Valcourt, Canada, have made us the world leader on snow,” said Gerd Ohrnberger, vice-president and general manager, Product Engineering and Manufacturing Operations division. ”They are the best in the world at designing and manufacturing engines and vehicles.”

The 3,000,000th Ski-Doo snowmobile was originally destined for the European market. It will instead join the millionth and two millionth Ski-Doo sleds at the J. Armand Bombardier Museum in Valcourt.
Coincidentally, the 2 and 3 millionth snowmobiles are both Summit models. The original Ski-Doo Summit snowmobile was the first OEM sled designed specifically for the unique character of mountain snowmobiling. In the model’s 20th anniversary year, BRP is still leading the mountain snowmobile segment with the most specialized sled in the market.