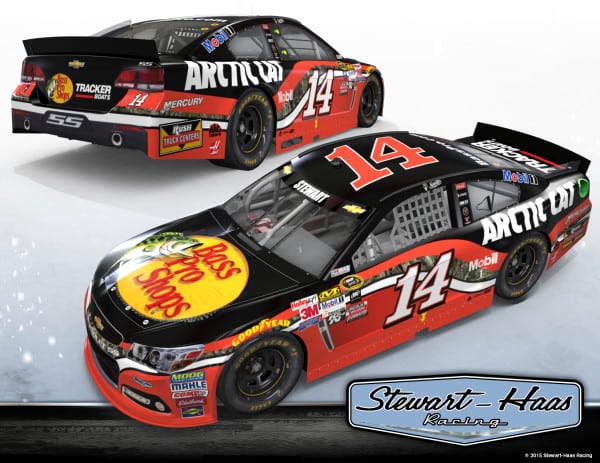 Just got this official word in from Cat today. Looks like we will be tuning into this weekend’s race to see the feline put in some laps on the Tony Stewart car.

Arctic Cat, one of the most widely recognized and respected names in the snowmobile, ATV and Side-by-Side industry, will join Bass Pro Shops as the co-primary sponsor of Tony Stewart in the 31st annual NASCAR Sprint All-Star Race May 16 at Charlotte (N.C.) Motor Speedway.

Stewart, the three-time NASCAR Sprint Cup Series champion, will make his 17th appearance in the All-Star Race Saturday night. Stewart won the 2009 All-Star Race, which was the first victory of any kind for Stewart-Haas Racing (SHR), the team Stewart co-owns with Haas Automation founder Gene Haas.

“Passion is a part of everything we do, and no one races with more passion than Tony Stewart,” said Greg Williamson, Chief Marketing Officer, Arctic Cat. “We’re very familiar with Tony as a racecar driver, and just as familiar with him as a sportsman. He has experience with our entire product lineup, which includes snowmobiles, ATVs and Side-by-Sides. He’s driven them all and has provided some great feedback. After being with him so many times off the track, it’s great to be with him on the track for this weekend’s All-Star Race.”

“Whether it’s on my property in Indiana or when I go on vacation and ride with my crew guys, Arctic Cat is always with me,” said Stewart, whose most recent purchase was an Arctic Cat Wildcat 1000 X Limited. “I give them a workout in every season and they never let me down. I get them straight off the floor at Bass Pro Shops, where Arctic Cat has a full line of ATV and Side-by-Sides.”

Stewart is a NASCAR veteran with the second-most All-Star Race starts of all active drivers. This year’s race will be broken up into five segments totaling 110 laps, with segments 1-4 each being 25 laps before the final, 10-lap shootout for the $1 million victory. The field consists of race winners from the 2014 and 2015 Sprint Cup seasons, as well as former All-Star Race winners and Sprint Cup champions who are full-time competitors.

The All-Star Race begins with qualifying at 7 p.m. EDT with live coverage provided by FOX Sports 1, PRN Radio and SiriusXM.