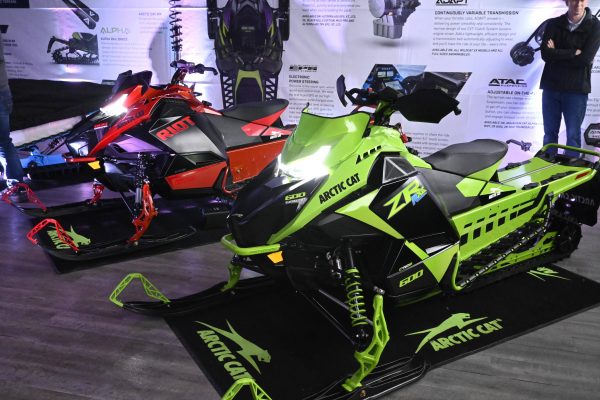 Ever been to a mosh pit? If you were at the release of the brand new Arctic Cat chassis at Haydays this year you would have gotten a taste of the fever the Cat faithful have been waiting for. The pictures don’t do it justice as there were literally thousands of people smashed as close as possible to get a glimpse of the new sled.  This event is the un-official start of winter season here in the Midwest, so it was fitting to show the big bling that has been many years in the making. The summer-like weather did not stop snowmobilers from coming out in droves and the biggest news of the weekend by far was the Cat announcement. Honestly, you would have thought AC/DC was coming out of retirement judging by the amount of security and buzz around the 2pm unveiling.

As an insider of sorts, we have been teased with tiny tidbits of info for the past couple seasons that this was in the works, but finally seeing it materialize and being able to poke and prod both the machine and engineers was way beyond exciting. Keeping secrets is hard when you are a fanatic especially when your family wants to know what is coming just as much as anyone else! Imagine getting your sled license at 12 years old and finding out that your parent’s ordered you a brand new snowmobile for Christmas, but you can’t let them (or any of your friends) know you know. Embargoes are like this. Then, when you do finally get that sled you want to scream excitement to the world! Everyone we knew that bleeds green was pressing beyond belief to shed any info, so it was a powder keg when folks finally got to lay eyes on it.

Textron engineering delivered something that might just shake up the industry and even the other OEMs were happy to see new life from another one of the big 4 manufacturers. The Catalyst comes with a HUGE weight savings (Figure about 10% less and do the math – but don’t ask on exact numbers because the engineers were tight lipped) but potentially this could be the lightest machine on the market. 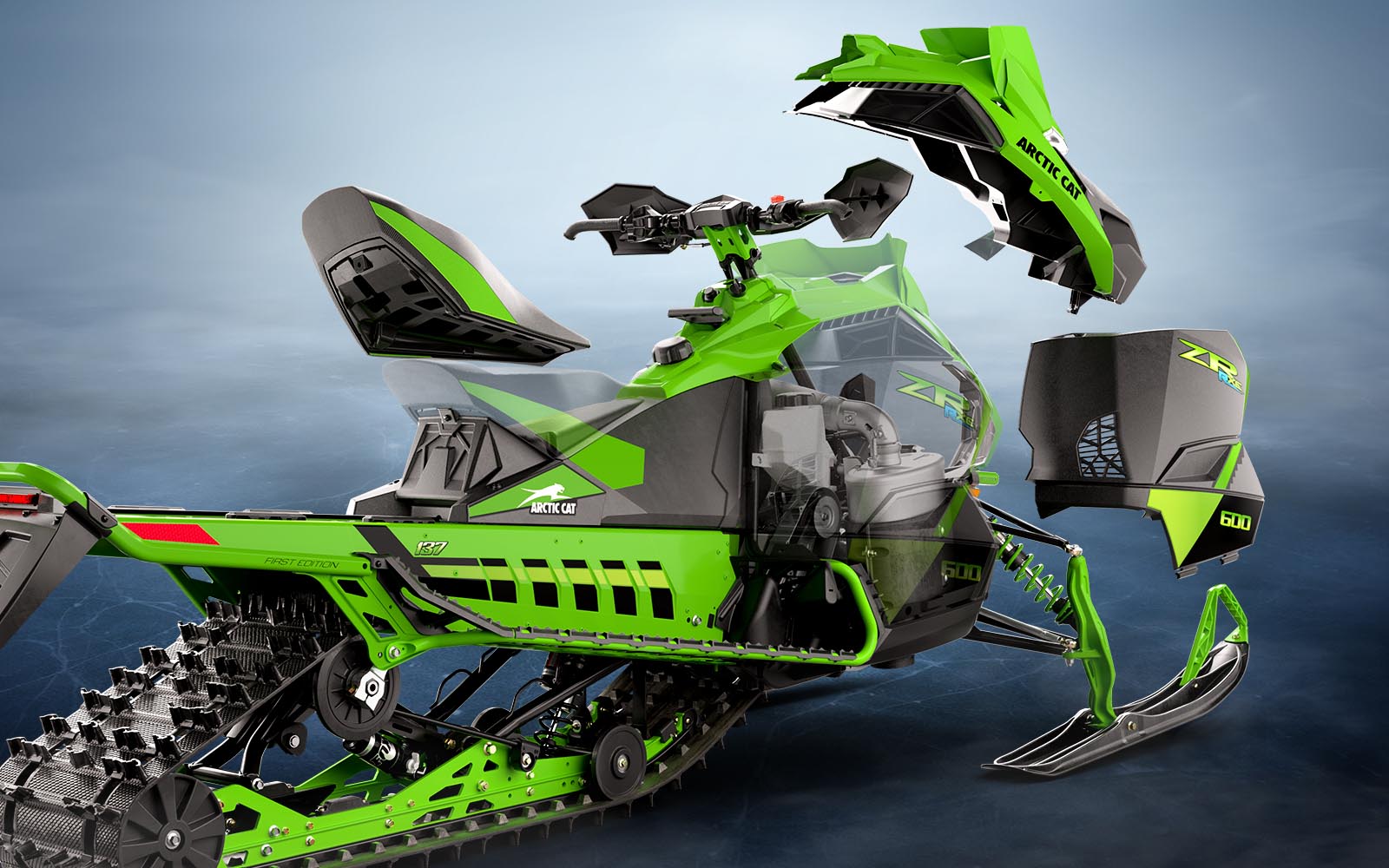 Wait for it, wait for it, breath in, hold it, and release! If we had to describe the marketing theory on this sled that is how we would do it. We were as frustrated at not being able to see things sooner as everyone else, like having your birthday party delayed a couple times, but then having a massive blow-out bash like none-other!

Living in the Midwest, not too far from Cat’s Thief River headquarters, there are a lot of Arctic fanatics in our area, and they are some of the most die-hard loyalists around. Much of this was built on the past and their domination of race circuits like cross-country and  snowcross for quite a while. Couple that with their chassis that defined much of the industry in the late 90’s to early 2000’s. Plus their ProRide/ProClimb chassis that was released in 2012 has stood the test of time to be a dependable option, but it always seemed to be slightly lagging behind the fast pace of new innovations from other OEMs during its eleven-year tenure.

At last month’s pre-release, Arctic Cat challenged their riders to pick a name for this new chassis in their August teaser. We humbly submitted several requests such as the ‘Lion’, ‘Liger’, ‘Beast’, and a few we can’t mention here… but we wanted this new cat to be, to have a name that said ‘King of the snow jungle’. However, we were unfortunately over-ruled, and/or laughed at, and the name that they landed on was the CAT-alyst, (or “Catalyst” proper). This was actually statistically done and numerous names were in the top 3 (yeah, in retrospect ‘Liger’ was a poor choice) but Catalyst was proposed multiple times and the folks that did propose it were recognized by Cat. 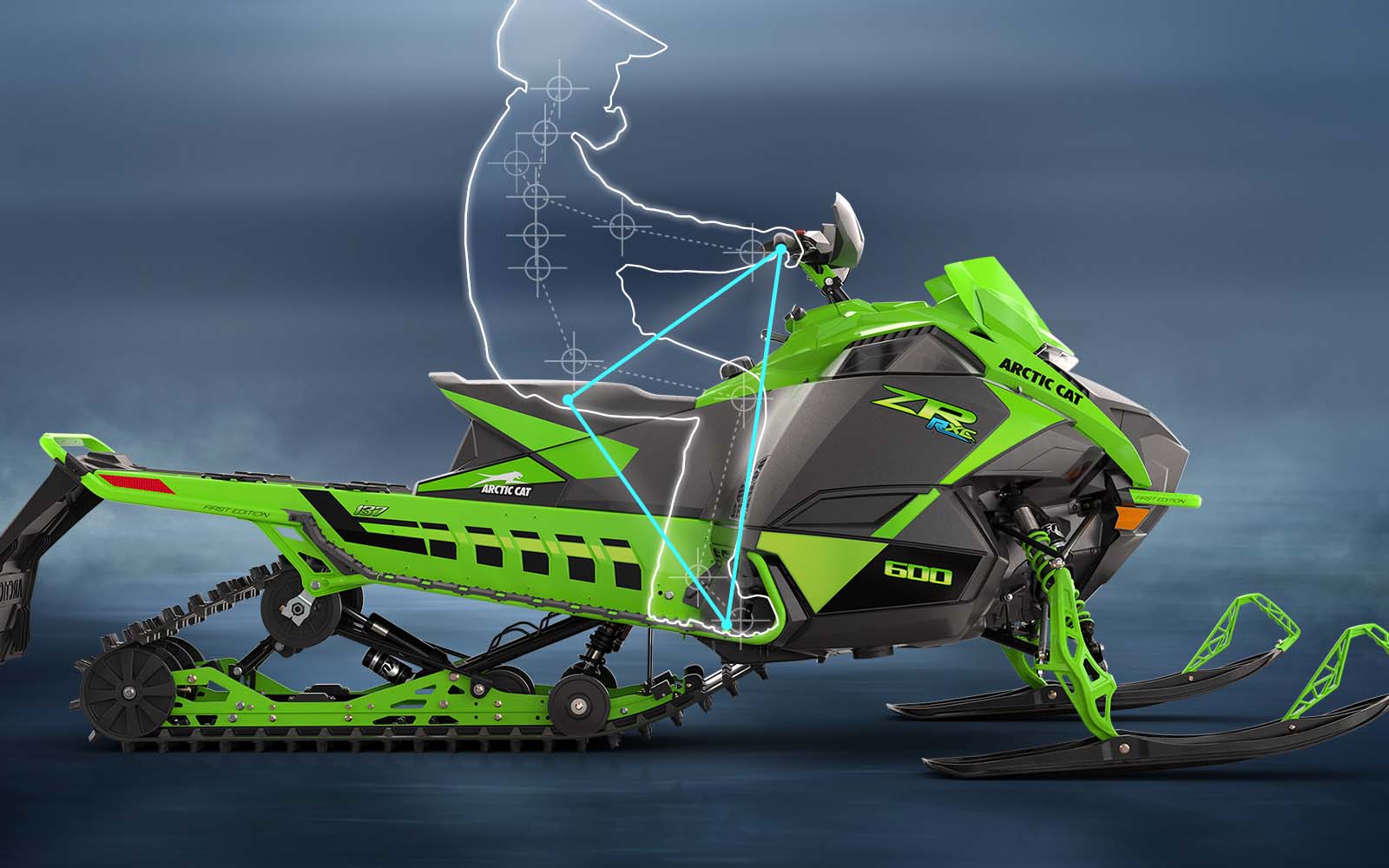 It’s all about the chassis!

This is a lightweight aluminum sub-frame with some post frame components such as the footwell that is comprised of composite material. The design consists of far fewer parts overall, which is how they were able to shed off the estimated 10% of weight from its predecessor. Engineers claim that not only is it lightweight but it also it is extremely durable. The chassis is more rigid and flexes less, but things like the running boards in particular are more durable and retain shape longer. The boards have a thin metal frame with composite overlay that can easily be switched out if there is an issue, or we are guessing in the future for customization.

One of the most interesting features of the new sled is that is it utilizes a belt drive system. This is similar to what Polaris used on their high end mountain lineup in years past but Cat has designed theirs to be in numerous models of the Catalyst chassis, which is an industry first. Not only is the design simpler, but it eliminates the need for chain case maintenance, carrying and changing oil, and far less parts that can break.

So how does it handle? Well, we have not had the chance to throw a leg over this pony, but we talked extensively with Textron engineers who have had many hours of seat time.They expressed that jumping on this new platform isn’t going to be a completely unfamiliar ride to what folks have gotten used to before. It is not as big of a jump for example from riding a trailing arm sled to a rider forward design. However, the new Catalyst does have multiple improvements that we personally felt were urgently needed when comparing the former chassis to the latest and greatest from other OEMs. The geometry changes will give the rider more reactive control which results in easier steering and not having to force the sled to turn as much. This results in easier cornering, better bump and chatter control, and a more forgiving and agile ride for whatever you decide to throw at it. 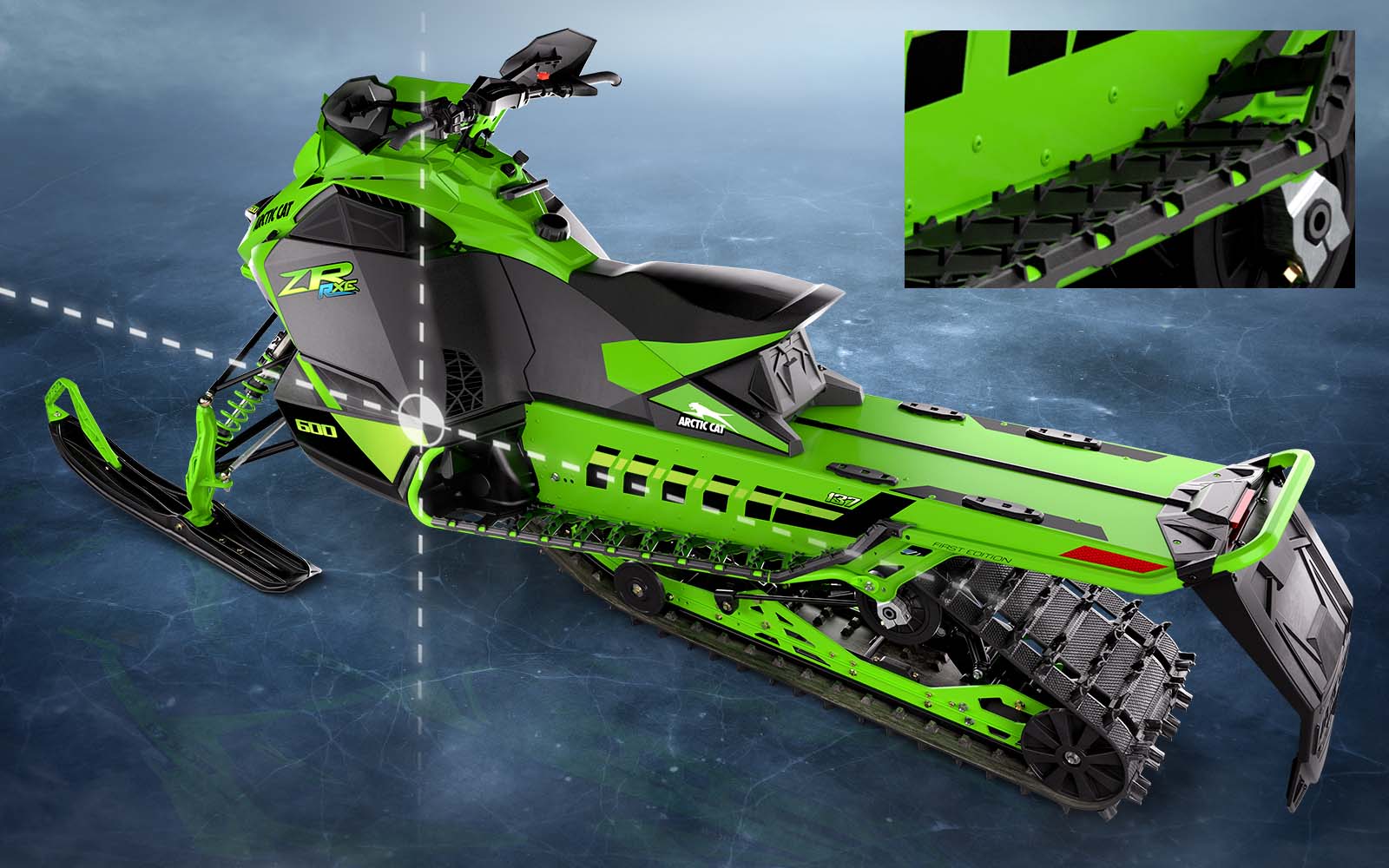 Another interesting aspect (which honestly most people don’t talk about that much) is the fuel tank… more importantly the actual fuel IN the tank. That fuel load is a big piece of the weight control of the machine and affects the ride when it is moving around in turns, on the trail, on edge in the powder, climbing hills, etc. The redesign was able to eliminate much of the weight shift during these maneuvers and so you do not have 70 pounds of fuel fighting you while trying to do your best David McClure maneuvers in the POW.

For 2023 this new chassis will be available in three different models only. The ZR 137-inch trail version, the Riot 146-inch crossover and a M-Series 154-inch mountain sled featuring the Alpha one single beam rear skid. Besides the obvious skid length differences, each of these chassis have a unique steering system that is designed specifically for its riding segment, but the Catalyst will be completely capable and will certainly be compatible for use across the market segments. 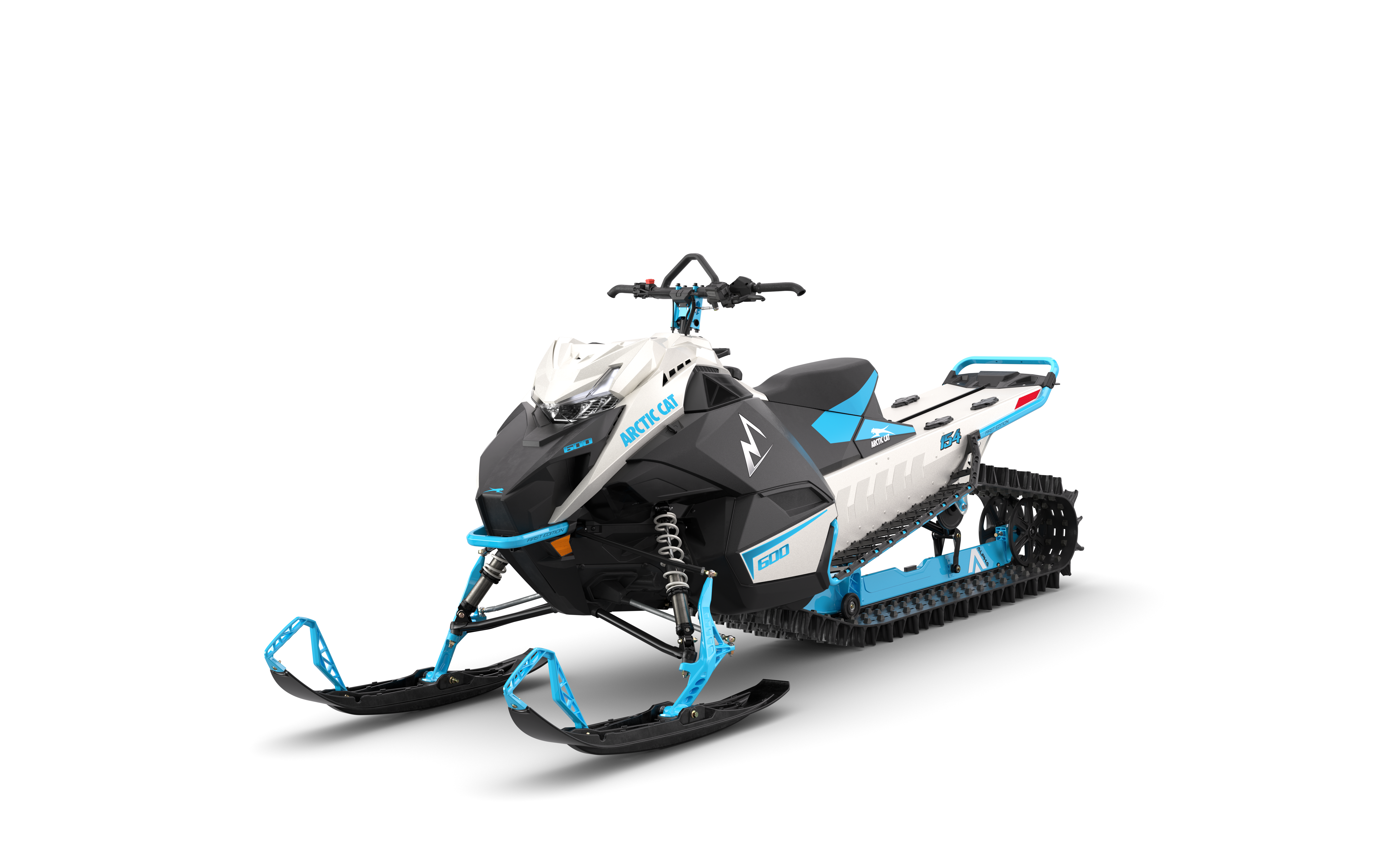 Motor Choices? They are coming!

Ok, I know that everyone was asking what’s up with the new sled coming with only an updated 600 Ctec2 motor. Well, the short and skinny is there is not anything wrong with it… sure, we want a bigger motor or a big 2 or 4 stroke turbo just as bad as you do! But this is year one, and this 600 is one of the most reliable around, delivers an ample amount of power, and in the new frame it will have incredible power to weight ratio after shedding so much baggage. We also don’t consider our readers to be kool-aid drinkers, and we are pretty sure everyone can read between the lines here. There is almost certainly a larger motor that will be paired with this chassis in the future for anyone without a crystal ball. 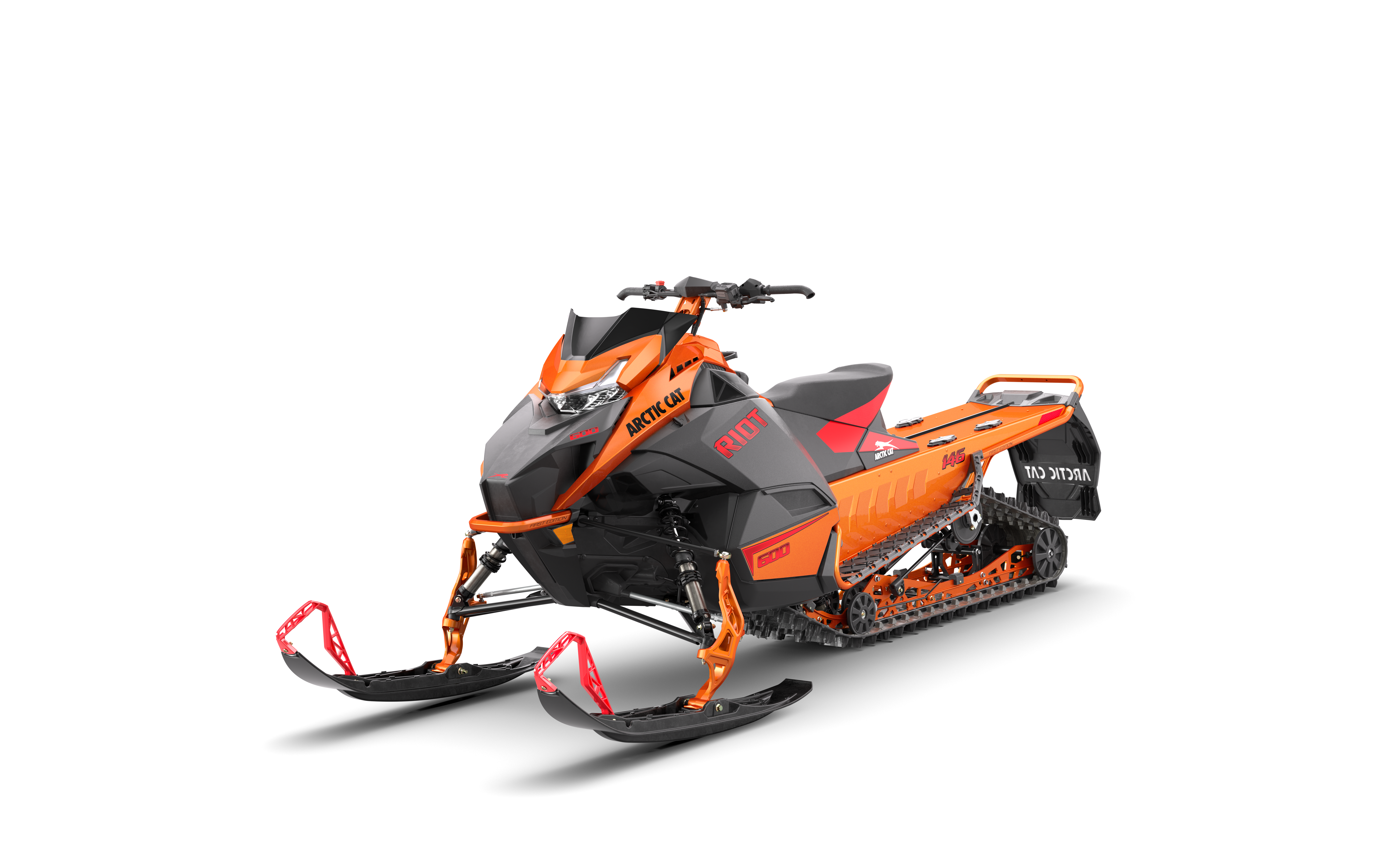 In addition to the new chassis, Cat is also offering up other upgraded goodies. You’ll get full LED lights (if you’re a Ducati rider you’ll like them), ATAC electronic suspension, a completely new quick change accessory mounting system called ATACH, and a really mean looking front end. The lights are unique in that on low beam one side lights up brighter than the other, and the dispersion on hi beam is just fantastic. The ATACH system is also something long needed to compete with the systems from Polaris and Ski-Doo. It is easy on and off, has full locking capability, and the fit and finish is high quality. This is not just a ‘quick fix’ system to stay in the game and seems to be well-thought out. 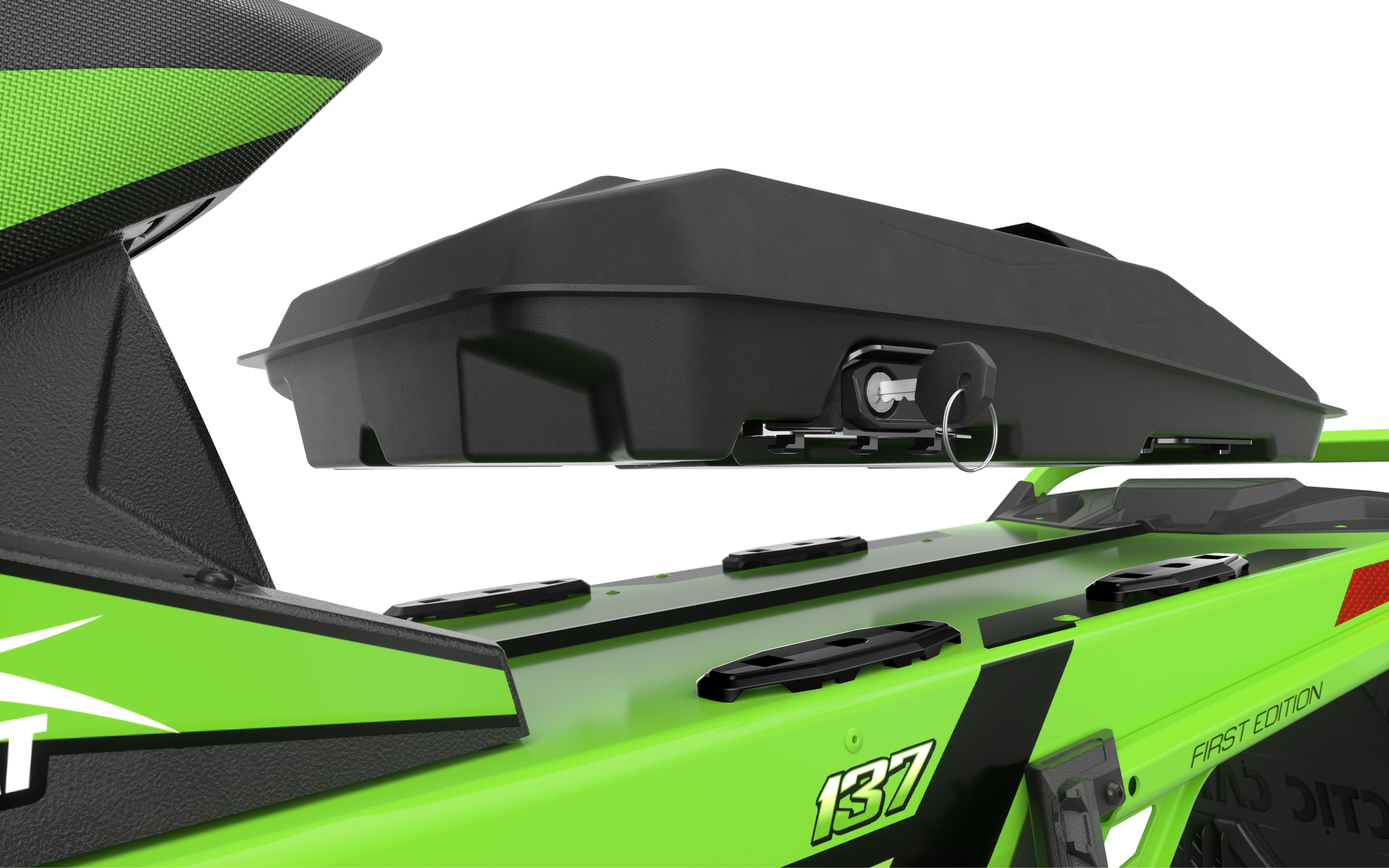 Again, unfortunately our only ‘ride’ experience was talking to Cat engineers, sitting on the sled, moving it around, etc. We are hoping that as soon as the snow starts piling up that we can get our pilot goggles on and finally light that fuse we’ve been waiting on for so long. Maybe we can bust out the advent calendar early as Christmas riding time on the Catalyst can’t come soon enough! 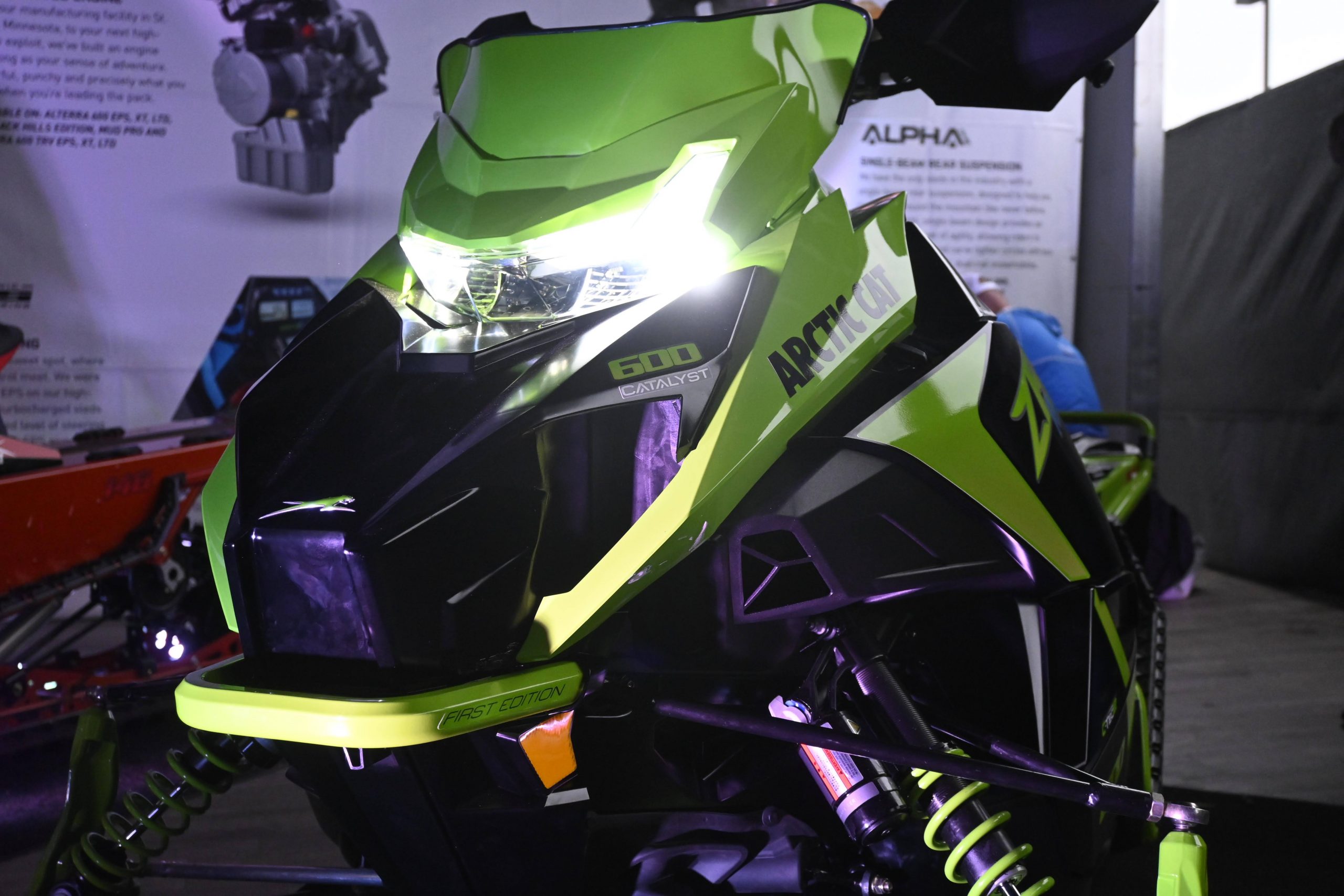