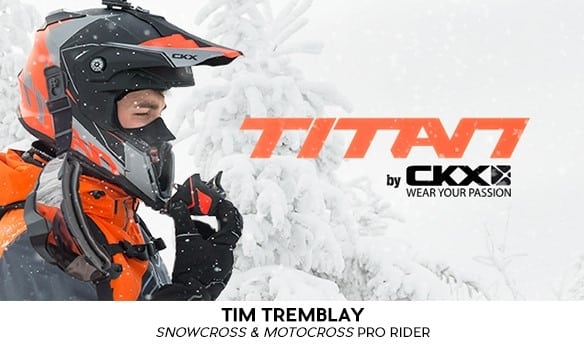 Québec, February 8th 2016 – CKX is proud to launch the helmet that will create a total break with the traditional backcountry winter helmets. Available in Fall 2016, you’ll hear about it for sure! The CKX TITAN will appeal to everyone and will leave no one indifferent … for the right reasons.

It’s following a V.I.P. invitation for dealers and media of the snowmobile industry that CKX had the pleasure of unveiling the one-of-a-kind CKX TITAN backcountry helmet. Upon taking possession of the admission ticket to the V.I.P. launch, we were quickly faced with the fact that this new helmet will revolutionize the way we ride in the backcountry.

It read: “BE BRAVE. TAKE RISKS. NOTHING CAN SUBSTITUTE EXPERIENCE.” A famous quote popularized by writer Paulo Coelho. He is also known for his quote: “There is only one thing that makes a dream impossible to achieve: the fear of not achieving it.” A phrase that could also have been applied to the TITAN helmet.

Even before the helmet was revealed and before the crowd found out how this backcountry helmet was so different, CKX knew that the TITAN story was off to a good start. CKX knew because earlier this winter, an agreement was signed with the 2012 Snocross Pro-Open class world champion and 6 time participant to the X-Games, Tim Tremblay. Tim will be the TITAN’s bearer.

THE VERY FIRST MODULAR BACKCOUNTRY HELMET OF ITS KIND

CKX and its tagline “Wear Your Passion” was looking for a meaningful name for this helmet that would inevitably ignite the passion to drive in complete freedom. Synonymous with magnificent and colossal, the name TITAN, inspiring confidence and encouraging the achievement of gigantic feats, was a perfect fit.

TITAN stands out from other backcountry helmets on several points,
more specifically by:

« This helmet is a GAME CHANGER, it will redefine the standards»
Stephane Dion, artist designer behind the TITAN concept.

« When you are riding your snowmobile hard and creating your own heat, you really appreciate being able to open the muzzle »
Tim Tremblay, actual best Canadian Snocross rider and TITAN spokesperson.

ECE 22.05 certified and available for winter 2016-17, CKX TITAN backcountry helmet will be on many heads next season and on the podiums for sure!

Until then, see the promotional video: https://youtu.be/fqr6z0qNVs0

You can get more informations and visual document through the following link:

Information
For more information about the CKX TITAN backcountry helmet or any CKX products, contact Kimpex at communications@kimpex.com.