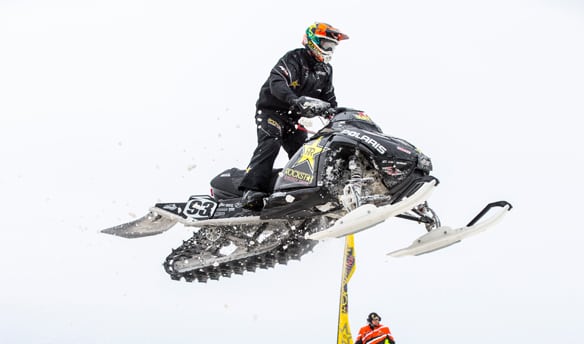 Team Rockstar Energy Polaris Racing’s Iain Hayden clinched the CSRA Triple Crown Championship at the Grand Prix of Valcourt, QC this past weekend. Valcourt hosted the final round of the Triple Crown title hunt on the first night of the three-day event. An on-fire Hayden dominated the proceedings aboard his explosive Polaris IQ600 with a holeshot in the main and a wire-to-wire performance to the checkered flag. At the previous rounds in Rouyn Noranda and Three Rivers, QC, Hayden scored 1 and 2 main finishes respectively.

Team Rockstar Energy Polaris/Huber Racing Piller’s Colby Crapo put the finishing touches on the Triple Crown main, following Hayden across the finish line in second place. Crapo ended up finishing runner-up in the Triple Crown Championship, giving Rockstar Energy Polaris a double-punch in the series. Bitter sub-zero temperatures, which averaged -25°C (-13°F) during the day, and strong winds that whipped the abundance of snow into white-out track conditions, ensured the toughest possible racing conditions for the snowcross combatants all weekend long.  Despite the blustery weather the Grand Prix of Valcourt classic attracted large numbers of hardcore Quebec motorsport fans who came to see some of the best drivers from their home province, Ontario, and the U.S. in action at the prestigious event.

Thank you for your continued support