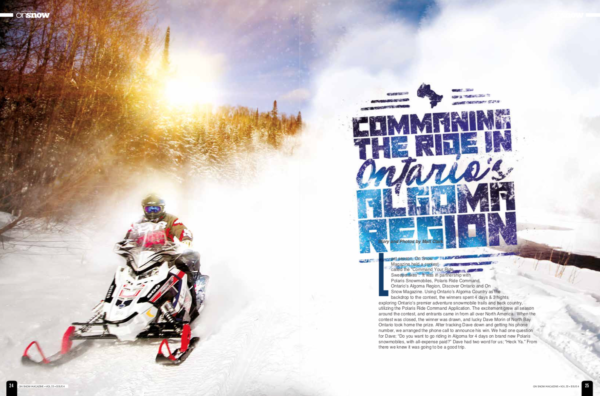 Last season On Snow Magazine developed a contest called the Command Your Ride Sweepstakes.  It was in partnership with by Polaris Snowmobiles, Polaris Ride Command, Ontario’s Algoma Region, Discover Ontario and On Snow Magazine. Using Ontario’s Algoma Country as the backdrop to the contest, the winners spent 4 days & 3 nights exploring Ontario’s premier adventure snowmobile trails and back country utilizing the Polaris Ride Command Application. The excitement grew all season around the contest and entrants came in from all over North America.  When the contest was closed, the winner was drawn and lucky Dave Morin of North Bay Ontario took home the prize. After tracking Dave down and getting his phone number, we arranged the phone call to announce his win. We had one question for Dave; “Do you want to go riding in Algoma for 4 days all-expense paid on brand new Polaris snowmobiles?” Dave had two word for us; “Heck Ya.” From there we knew it was going to be a good trip. 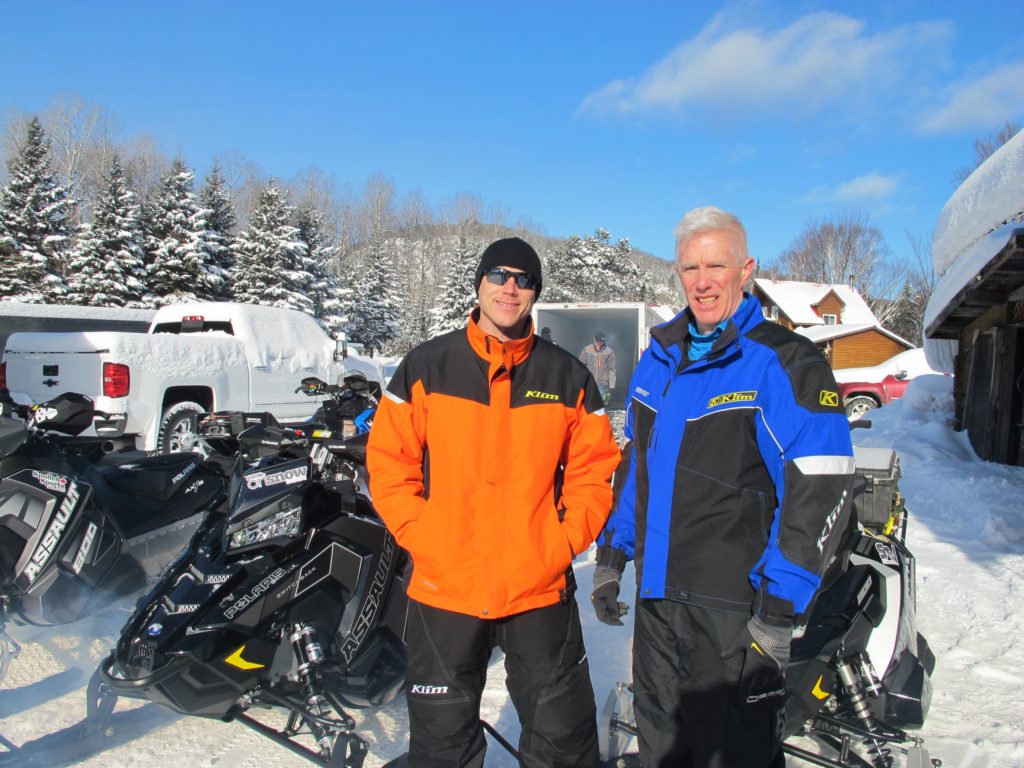 The winner was picked and now the route was to be decided.  Working directly with the Algoma Region we decided to make Sault St. Marie our starting point and meet up with Dave Morin and his riding buddy Dave at the Fairfield Inn & Suites by Marriott to start the adventure. The Fairfield is a great place to stop for the night. It boasts a huge parking lot and they welcome you to leave truck and trailer while you explore the region. Being that The Soo is a bit of a drive from the south where our offices are, the Boston Pizza in the parking lot, was a welcome site. Also the drink specials until 9pm also helped.  If you leave your truck and trailer here, make sure to talk to Dave the general manager as his is very knowledgeable on the trails as well as his desk staff.  They are all sledders.  For this trip and for logistics on our camera crew we decided to take a 40min drive to Searchmont and leave our rig at the Driftwood Valley Chalets. 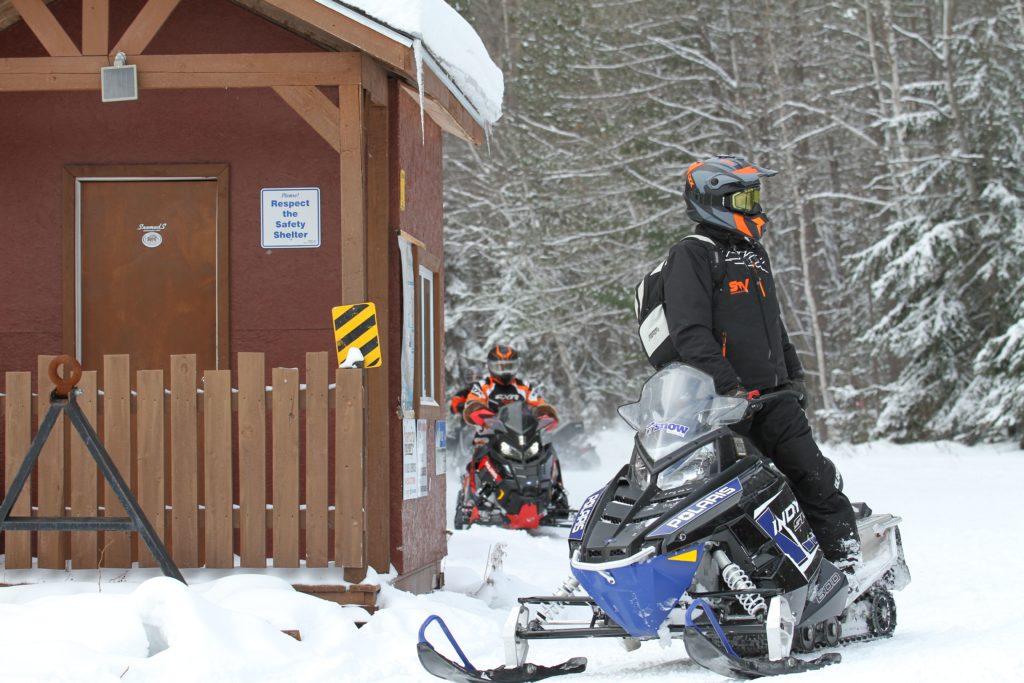 Day One had us leaving the truck and trailer at Searchmont and blasting up the D Trail  to end up at Half Way Haven.  We met up with our friend John Brechenridge of the Sault st Marie trailer blazers who would be joining us to Half Way for the ride and show us some cool stops along the way. The trails up to Half Way are amazing and the terrain is anything but flat. You spend time in some wooded areas and pop out on to the pole line that crosses through some amazing elevation changes. There are spots that, on a clear day, you swear you can see 30kms in any direction.  The key to the pole line is to respect the speed and make sure you watch for the 90 degree turns into the woods off the hydro line.  Then when you are in the bush you will also want take your time. They are tight and twisty and we all know whenever you come off the hydro line you tend to be a little heavier on the throttle than typical.   About half way to Half Way Haven you come across the warm up shed complete with a satellite emergency phone.   This would be a good time to discuss that on these trails the key to be prepared.  These trails are remote. When you are at the warm up shack for example the closest road is 50kms in any direction, so having the safety essentials is very important. Things like; tow ropes, lighter/flare, food, and need we say a spare belt. Also extra gas. New sleds can make the ride from Searchmont to Half Way Haven on a tank of gas, however as the saying goes “You will never run out of gas if you have some on board.”  From the warm up shack it is a straight shot on fast sweeping trails over more elevation changes to Half Way Haven. 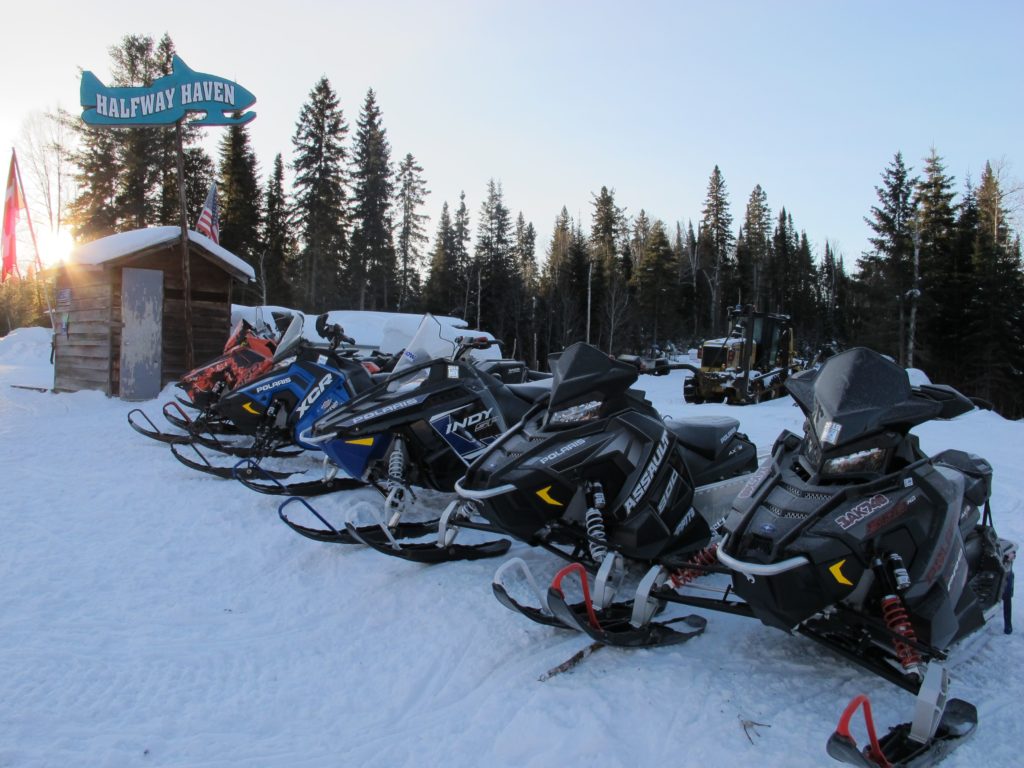 Arriving at Half Way Haven is one of those moments that only a long distance sledder can appreciate. It is a mix of joy and relief, and when you check in and meet the owner Sean Frawley you immediate get the impression that you are going to have fun. “Half Way Haven is legendary” says Sean. “It was built about 20 years ago in the middle of nowhere. There was a gentleman that used to pack gas into the bush so the customers could make it from Sault Ste. Marie to Wawa, and that’s where the idea came from.” Half Way Haven is an essential part of the trail system in Algoma Region.  It is called Half Way for a reason.  It houses the groomers, supplies gas, a warm bed and some of the best food you will find in the region. Sean came to own the resort because he was a hard core long distance sledder and it was a passion of his to own a snowmobile resort. Sean knows how to cater to sledders and trust us his food is some of the best you will find.

Day Two had us departing Half Way and continuing along the D Trail with our where we know from talking to all the other sledders at Half Way that we will be finding some amazing elevation changes, and some really epic photo ops.  Joining us on this part of our adventure is Russ Jones from TopSecretBoondocking.com who is legendary around these parts and knows places that are epic but off the beaten path. This region is known for adventure sledding, and this was the focus of day two. The trail up to Wawa again is some of the best trails this sledder has been on. It starts out with some great twisty trails just outside of Halfway, that gets the muscles loose and warm. Then you find yourself on the hydro line again that has some really epic elevation changes. Along the way Russ showed us a few spots along the way where you can jump off trail and find yourself in some pretty serious powder. Keep in mind when you are in the region that off trail under the Hydro lines is strictly prohibited, but there is lots of spots of crown land that are not hydro lines and you can play for hours.  This is where the Polaris Ride Command App came in really handy. The sleds that were equipped with the heads-ups display shows your location in reference to the trail and with the app on all our phones actually showed us where everyone in the group was in reference to location as blue dots. 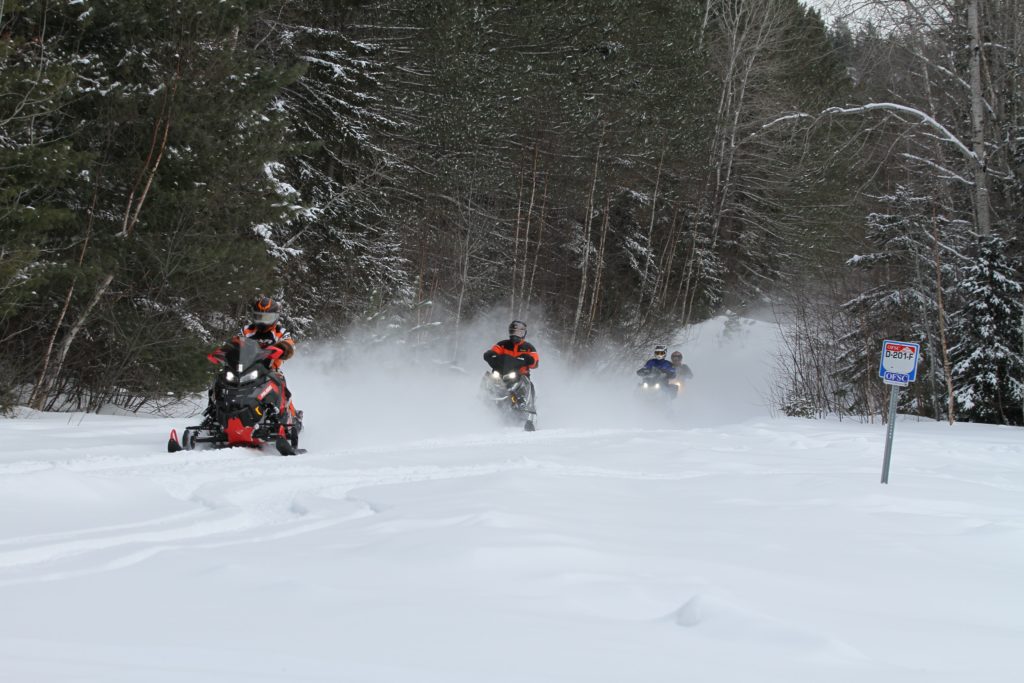 At the end of day two we ended up at Wawa Motor Inn, where we enjoyed the full service snowmobiler accommodations that are renowned at the Wawa Inn. The inn offers both standard hotel rooms for small groups; however they also offer private cottages that can host larger groups with fully working kitchens, multi rooms and 4 piece baths.  The Wawa Inn does have a full working restaurant for dinner and breakfast, as well as, at time of printing they were also re-opening the newly renovated sports pub with fully operational bar and games. Not to sit on idle hands our group decided it was a perfect opportunity to show off our bowling skills so we hit the bowling alley for some weekend Rock-N-Bowl and let us tell you – it did not disappoint. 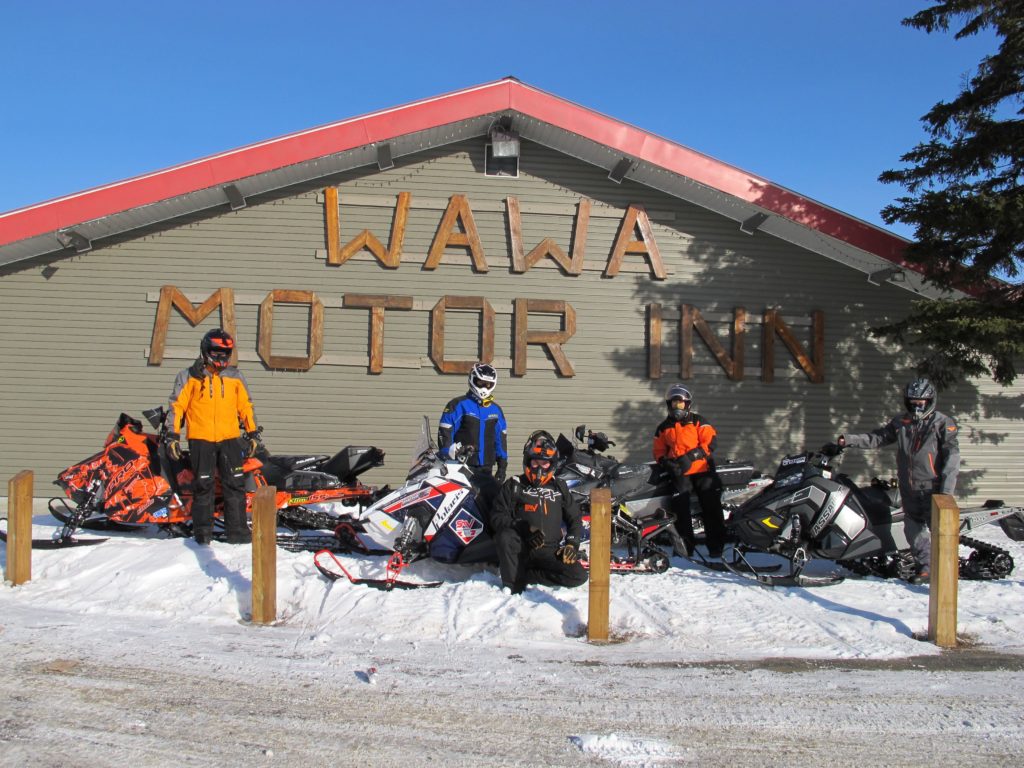 Day Three arrived as bittersweet.  We were off to explore another loop north of Wawa with Russ at lead to do more trail riding and more epic boondocking in the backcountry of the Great Lakes Basin but, we knew it was our last day so we were a bummed that the adventure was coming to an end.  The loop took us up the D trail towards Dubreuiville, and not to sound like a broken record, the trails were again a mixture of fast sweeping trails with unbelievable elevations. Along the way we stopped at some Top Secret locations that Russ showed us and being that they are top secret that is all we have to say about that. If you are interested we suggest you head over to Top Secret Boondocking dot com, and have a chat with Russ. There is a great lunch spot and newly renovated hotel in Dubreuiville, should you want to stop there and play another day and make your trip a 4 day ride, however our schedules did not allow so we had lunch and headed back to Wawa for the night before heading back to our truck and trailer.

Using Ontario’s Algoma Country as the backdrop to the Command your Ride Sweepstakes was absolutely perfect and tied in the whole concept of adventure riding in Ontario. With the Polaris Ride Command on board, this adventure truly opened our eyes to just how amazing the trails are in the northern part of the province. You will meet amazing people along the way and trust us when we say the whole region is filled with like-minded snowmobilers that are looking for something different. If adventure riding is your thing, then Algoma needs to be your next destination.

See you out on the trails.

To see the complete feature video on the Command Your Ride in Algoma Region head over to www.snowmobilertv.com/featured 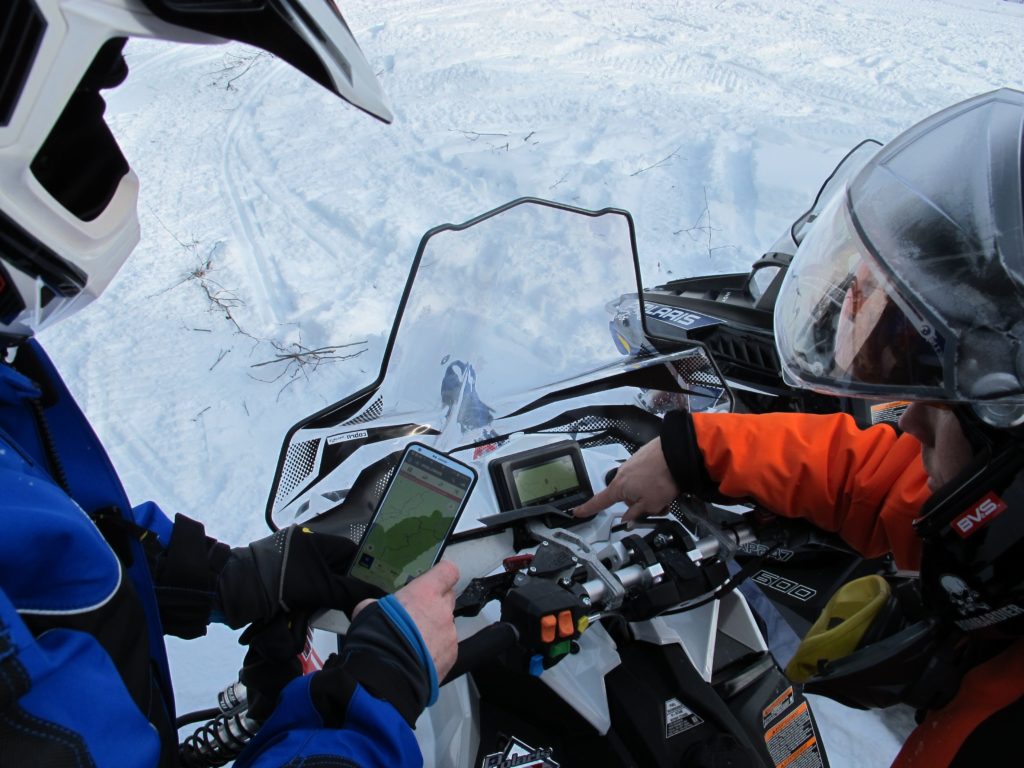 Polaris Ride Command technology truly is next level stuff. For this trip to the Algoma Region we utilized the trail maps that are built into the app, our smart phones and the Polaris Interactive Digital Display. The Ride Command App allowed us to track our ride and follow the pre-determined waypoints that have been set for the trip. We also was able to view updated local weather forecasts and even keep an eye on snow depth (which came in handy when we hooked up with Russ Jones at Top Secret Boondocking dot-com!) Lastly, and new to the app, we were also able to give up-to-the minute riding conditions that was built directly into the app. This new feature we believe is one of the coolest features, as it allows us, as a snowmobiling community, the ability to give up-to-the minute trail conditions. The more users that start to use the Ride Command App the more interactive this feature becomes. We truly believe that the Polaris Ride Command revolutionizes the snowmobiling experience, and were happy it was on board for this trip.