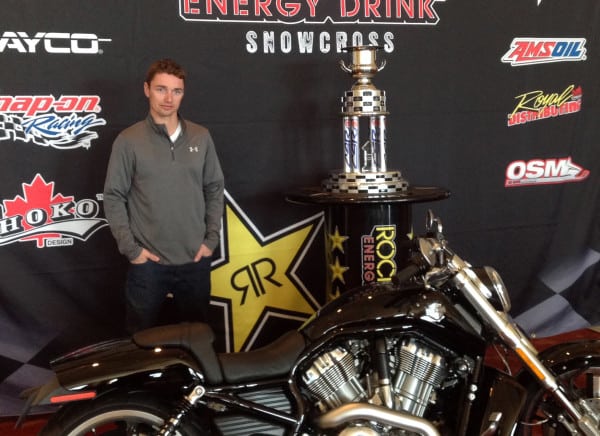 Mention the name Blair Moran amongst snowmobile race fans and everyone’s eyes immediately light up. Blair was one of the greatest snocross racers of all time, and frankly changed the sport of snowmobiling for everyone with his stand-up riding style. To honor the great 7C, the crew at the Canadian Snowcross Racing Association (CSRA) created a Blair Morgan 7C Cup to honor Blair and his accomplishments. The cup is machined from solid aluminum and weighs in art more than 70-pounds. It features the names of past CSRA Pro Open Champions from the past 20-years and will be on display at prominent races and shows including the Toronto International Snowmobile, ATV and Powersports Show this October 24-26. Iain Hayden, shown here with the big cup, has his name on the cup a whopping 7-times. Iain won the championship again last season and along with the cup, he scored a new Harley-Davidson V-Rod for the effort.