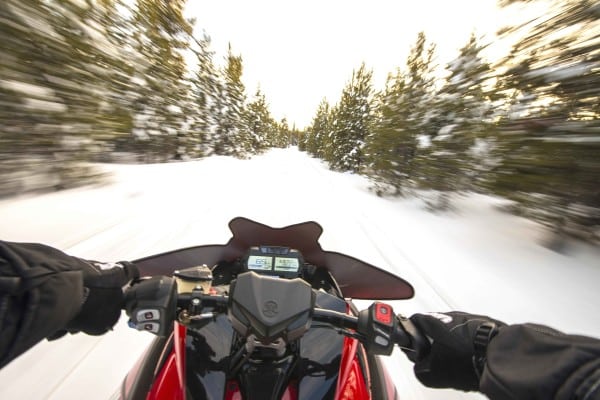 Boom… Yamaha freaks just got a bonus 45-ponies available on their 2014 or 2015 Viper sleds as Yamaha announced today that the much asked for Mountain Performance Turbo kit is now available in sea-level trim. Designed for the 1049 Genesis motor in the all-new Viper, the Trail Kit is designed for elevation below 6,000-feet and will fit any and all 2014 or 2015 SRViper models. The kit produces up to 45 additional horsepower, and unlike the Mountain Kit, features an electronically controlled waste gate. Suggest retail on the new Yamaha MPI Trail Turbo Kit is $3,2999 and will be available at Yamaha dealerships in late fall. Also for those planning to be at Haydays, the Yamaha crew will have one on display, so be sure to stop by and check it out. Here is the official release from the corporate kids at Yamaha:

Yamaha trail and crossover enthusiasts looking for the ultimate in power and reliability can now have their cake and eat it too with the newly released Mountain Performance Incorporated (MPI) Trail Turbo Accessory Kit for Yamaha SRViper models. With the success of the factory authorized, dealer installed accessory kits exceeding expectations in mountain trim, the new MPI turbo kit was developed specifically for applications below 6,000-feet.

Mountain Performance has already developed a stellar track record for “boosted” Yamaha performance with its turbo and supercharger applications. Earlier this year, Yamaha announced the introduction of an MPI accessory turbo kit for the all-new SRViper M-TX. During Yamaha’s Spring Power Surge, Yamaha customers could purchase the MPI kit in conjunction with a new M-TX at a considerable savings. The dealer-installed kit delivers an additional 45-horsepower on pump gas while still retaining Yamaha’s legendary reputation for reliability.

The new MPI Trail Turbo accessory kit for 2014 and 2015 SRViper R-TX, L-TX, X-TX and S-TX models touts many of the same features of the Mountain Kit including the same 45-horsepower boost. Unique to the Trail Kit is the use of an electronically controlled waste gate. Both the Trail and Mountain kits feature a solid mounting system and a new muffler that is quieter than previous designs; both systems also meet EPA standards.

“Ever since we introduced the MPI Mountain Turbo Kit for the new M-TX this spring, everyone has been asking for a sea-level version,” said Yamaha Product Manager Rob Powers. “The guys at MPI have been working all summer on this new kit…we didn’t want to compromise power or reliability, which was a real challenge, but we got there and riders are going to be blown away by the power and ride-ability of this system.”

The new MPI Trail Turbo Kit will be available at Yamaha dealerships in late fall.

For more information about the new MPI Turbo accessory kit and the entire 2015 Yamaha snowmobiles lineup visit your local Yamaha dealer or go to www.yamahasnowmobiles.com. Also be sure to follow us on Facebook and YouTube at facebook.com/YamahaSnowmobilesUSA and at youtube.com/user/YamahaSnowmobilesUSA