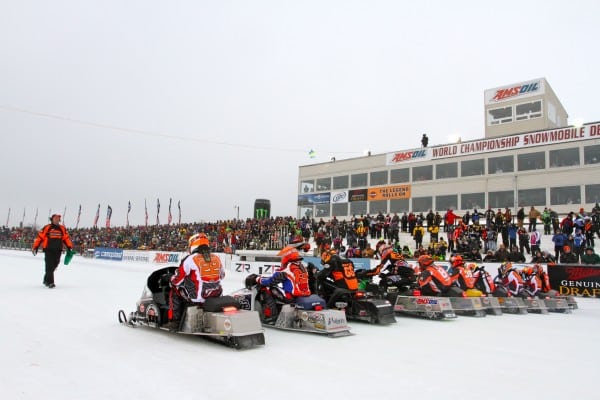 Few things can make this winter’s 50th Anniversary of the Eagle River World Championship Snowmobile Derby in Eagle River, Wisconsin much bigger or more prominent than it already is…that is except a big pile of cash to be handed over to the winner. Thanks to Jimmy John’s, those kids that talk fast and make sandwiches even faster, the payday for this year’s winner will be big…real big. Here’s the official release on Jimmy’s dough:

Eagle River, Wisconsin — The 50th Anniversary of the AMSOIL World Championship Snowmobile Derby is welcoming back an exciting sponsor for the World Championship, and they are bringing a lot of “dough” to the party!

Jimmy John’s is also putting up another $10,000 for the “Jimmy John’s Freaky Fast Challenge”, which will be split up among the top four drivers in the Championship race at the mandatory pit stop caution.  The leader at lap ten will pocket a cool $5,000, second $3,000, while third and fourth will each get $1,000.

The big payday at the AMSOIL World Championship will continue to be spread out across the top twelve finishers when the final checkered flag falls and the ice dust settles on Sunday, January 20th, 2013.  There is an additional $11,600 being paid out by the AMSOIL Derby Track.

The total payout for the 30 lap Championship Race at this year’s AMSOIL Eagle River Championship Snowmobile Derby will total $81,600, making this the richest payout in the history of modern day snowmobile racing.

As it states in the history section of Jimmy John’s website, “What makes Jimmy John’s different from the rest is that it’s honest, it’s damn good, and it’s damn fast, at a decent price!”  Those words could also hold true for the AMSOIL Eagle River Championship Snowmobile Derby, as we have the most exciting show and the biggest bang for your snowmobile racing buck to be found at any event this winter.  “Our show is damn good, damn fast, and at a decent price!”

For more information on the great offerings from Jimmy John’s Gourmet Sandwiches, please visit their website at www.jimmyjohns.com

Details on the AMSOIL Eagle River World Championship Derby can be found at www.derbytrack.com