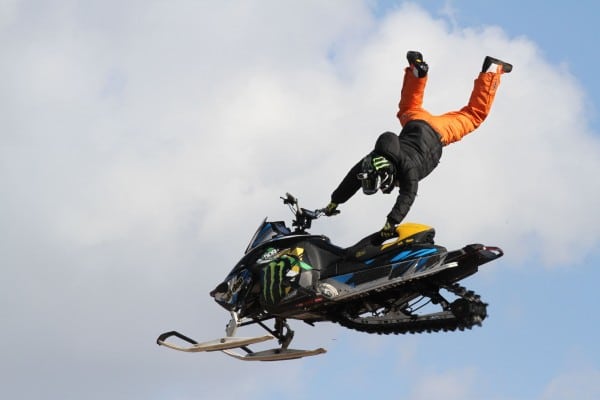 With word of Winter X returning and rumors of bruised egos within the snowmobile racing world regarding who is the king promoter of the sport, the kids at the International Series of Champions are trying to grab the lion’s share of attention with their recent announcement of a pair of big pay day freestyle events slated for later this winter. According the ISOC, the combined payout between the two shows is a whopping $50,000, now that will buy a lot of flat brim hats for the freestyle kids. Here’s the official release from ISOC:

“We’re thrilled to ‘up the ante’ and bring the freestyle event to Northern Michigan for the first time. With the best terrain and lake effect snow, we offer the ultimate playground for the athletes to test the limits of their machines – and gravity – as they conquer flips, extensions, big air, new tricks and landings. The spectators won’t believe their eyes!” commented Rob Sineway, General Manager, Turtle Creek Casino & Hotel.

The word’s out with the planet’s top snowmobile freestyles pilots that Traverse City will be the place to be the first weekend in February when the AMSOIL Championship Snocross tour stops for rounds nine and ten at the popular northern Michigan hotel and casino – Turtle Creek!

“Outside the Winter X Games the ACS Snowmobile Freestyle Jam Session will be the biggest event for freestyle snowmobiles in the country,” said Carl Schubitzke, Director of Operations and Racing for ISOC. “ACS is pleased to partner with Turtle Creek Hotel & Casino and Monster Energy on this one-of-a-kind event for our series. Cash prizes are on the line and we’re expecting a huge turnout on February 9th in Traverse City, Michigan.”

Beginning with the AMSOIL Championship Snocross season-opening round in Duluth, Minn. (Nov. 23-25) and running through the season finale in Lake Geneva, Wis. (March 15-17), CBS Sports Network will broadcast 16 half-hour race shows – all in HD – on Sundays at 10:30 a.m. EST. The AMSOIL Championship Snocross – as an added bonus – will also air in an evening repeat of each show during the week.