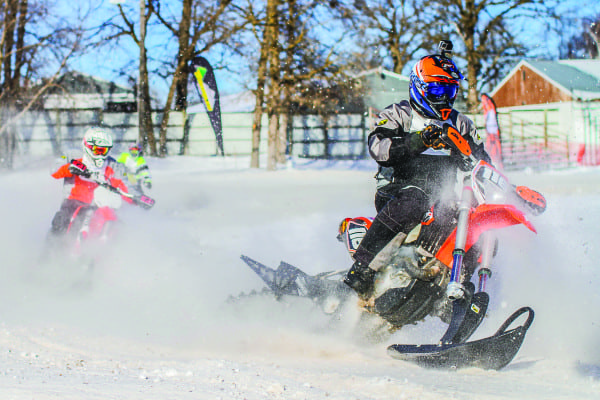 With word Winter X-Games would host a snowbike class for 2017, questions immediately followed as to who would compete in the all-new competition. We did some digging and got in contact with Ron Dillon who is the man behind the upstart National Snow Bike Championship Race Series. If you’ve never heard of it, don’t worry, neither had we despite learning the circuit hosted a 6-race series last year with stops in Idaho, Montana, and Minnesota. While X Games has already announced a short list of invited athletes, others will be selected from an upcoming qualifier event to be held at ERX Motor Park in Elk River, Minnesota, December 17-18. Long time sports promoter and X-Games snowmobile kingpin Joe Duncan is helping Dillon organize the event. The weekend will kick off with the X-Games qualifier from 12:00pm – 4:00pm; followed by a dash for cast at 5:00pm where competitors will race for $5,000 cash. There will be more racing on tap Sunday, with a full round of the National Snowbike Championship series. If you’re interested in competing drop an email to sportorganizer357@gmail.com. Fans can visit erxmotorpark.com for a complete schedule and ticket information.