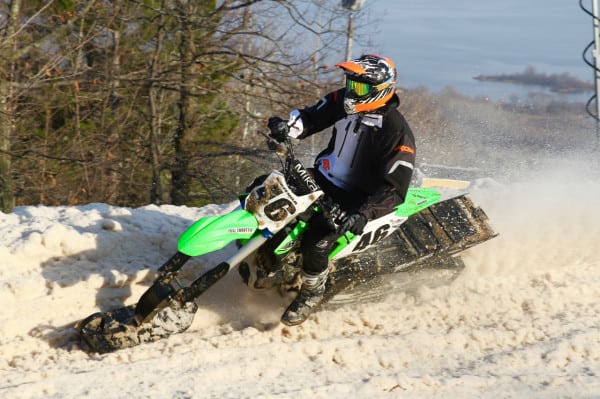 Seems everyone is trying to get into the snowbike game this winter including  thenational snocross tours on both sides of the border. While CSRA will be hosting select “exhibition” races throughout the season, ISOC has added a snowbike class to their national tour for the entire season. Duluth National marked the first race of the season for the new class and Harris Huizenga from Menoken, North Dakota took the win. Harris looked extremely comfortable on the buggy and was one of the only riders in the final field of 10 riders to double small features on the track. The snowbikes garnered plenty of attention on the national stage, but they clearly lacked the performance necessary to deliver a wow-factor on a national caliber track. While the field was comprised of mostly Timbersled conversions, the much anticipated Arctic Cat SVX450 was also in the mix ridden my long time racer Wes Selby who brought the SVX across the line in second place.

Wes Selby on his way to a second place finish in the first ever ISOC National snowbike race in Duluth, Minnesota. Photo Credit: ArcticInsider.com