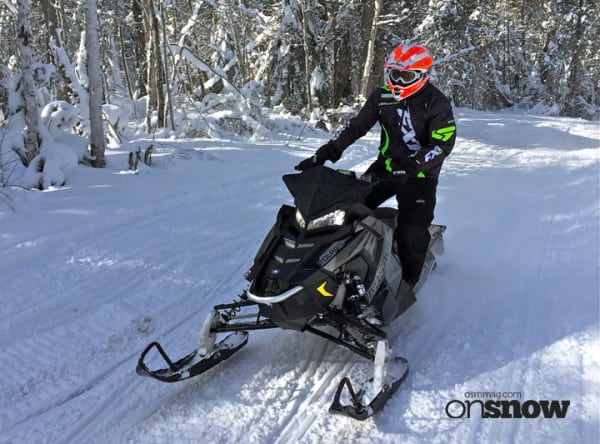 Each spring the crew here at OSM has a chance to sample most of the new models during the spring Snow Shoot event in West Yellowstone, Montana. The event is a busy four days where often times our primary goal is to capture the photography we will need for the upcoming season. Of course during that time we log plenty of seat time aboard the new sleds. However the four-day event can be a blur, jumping from sled to sled, shuttling models in and out for various photos, and often times only spending an hour or two aboard any one particular sled. Obviously we are gracious for the opportunity, but it never seems to deliver the true one-on-one ride time we crave and often times need to truly evaluate an all-new model. Throw on top of this mashed potato spring snow conditions and sleds that may or may not have proper calibrations (often times due to another editor fiddling with the shock settings unbeknownst to us) and you end up with ride evaluations that may or may not reflect the sleds shipped to dealerships in the fall.

This spring, after returning from the four day photo rodeo, the crew at Polaris called us up to offer up one of their new for 2017 800HO Switchback Assaults for us to sample further on our local trails. We jumped at the chance and headed north to Minnesota’s North Shore where we logged some real seat time with the new AXYS based Assault. Here is what we learned.

RIPPER – We already knew the 800HO motor was a big step up from the old 800 Liberty motor and we were immediately reminded of this again when throttling down with the new Assault. The sled literally leaps out from under you when you mash it, bringing a big smile to your face and the kind of throttle control we crave to influence overall ride characteristics. Approach a bombed out bridge crossing or corner exit moguls and you can quickly lift the skis and dance the new IGX rear suspension through the holed out hazard.

BALANCED – Our experience with the older chassis Assault was one that left us wanting more in terms of on-trail performance. It was a slice and dice buggy when taken off-trail to our favorite playground in Michigan’s Upper Peninsula, but the ride to get there had us taking up a spot at the back of the line. The new AXYS based Assault has much improved trail manners…much of this we attribute to the lighter chassis and improved rider positioning and ergonomics. While it might not carve up a trail in the same manner of a Pro-S for example, it can more than hold its own.

SOAKER – Aside from the addition of the 800HO engine, the most tangible difference with the new Assault is found outback with the IGX rear suspension. The big change here is the additional travel at the front of the skid. By using the same front arm as found on the Pro-XC suspension, the IGX delivers over 40% more travel at the front arm. As with all “rider forward” sleds, the travel and capabilities of the front arm is a critical component of ride compliance and comfort. In today’s sleds, the bulk of the rider weight is centered directly above the front arm (unlike old school sit-down sleds where the rear arm was the critical ride point). While we found the ride calibrations on the Assault to be a bit firm for our liking, especially on-trail, the additional travel was a noticeable and welcome change.

ERGOS – As mentioned above, the move to the AXYS chassis gives the 2017 model improved rider ergonomics as it relates to the geometric triangle of knees, shoulders and hands. It’s just easier to transition from sitting to standing as well as moving forward on the chassis to initiate improved on-trail handling. The other big improvements are found with the new PowderTrac running boards that offer more room, grip, and improved snow evacuation. But our favorite change was the new Pro Taper bars. The bend is more comfortable and more importantly the elimination of those goofy plastic hooked ends in place of a one-piece curved bar is better in every way.

INSTRUMENTATION – Since our loaner 2017 Assault wasn’t a Snow Check model it didn’t’ come with the Polaris Interactive Digital Display (PIDD), which in our opinion is the best gauge in the industry period. But we were greeted with a new LCD Message Center gauge, which features more information and a bigger 4.3” screen. The new gauge was easier to read and while still not big enough for our liking, especially when bombing a trail, it’s a step-up if paying for the full-color version is not in the cards.

In short the new 2017 Assault is better in virtually every ride performance category. While still not the best on-trail option in the Polaris line, trail manners are far better without sacrificing the superior off-trail capabilities that has made the Assault one of the best backwoods buggies around.