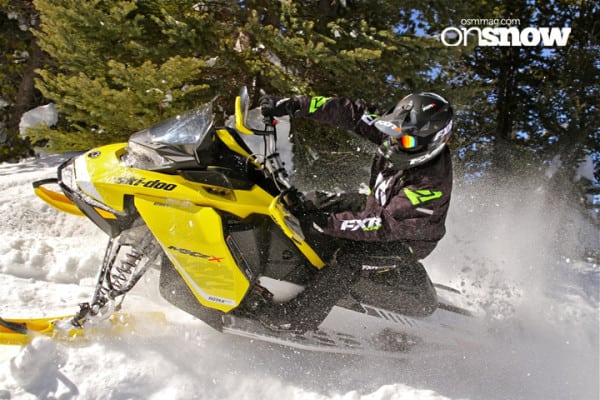 No question, for the 2017 model year it’s the new Ski-Doo fourth generation REV platform and second generation ETEC 850 that has garnered most of the new model buzz thus far. With Ski-Doo’s spring early order session ending in just days (April 13th) we thought we should give the new platform and engine another look. In total we had three opportunities to sample the new chassis and engine platform starting in late January at Ski-Doo’s testing facility in southern Quebec; again during the annual media Snow Shoot photography and evaluation session in West Yellowstone; and most recently right here in our own backyard. With the season winding down, we loaded up an early build MXZ-X 850 and headed to our familiar riding destination on Minnesota’s north shore. In our final go around for the season we were greeted with what we deem the best riding conditions of the three test rides. Temps were cold and the snow pack was set-up providing a better representation of conditions you’ll likely encounter next season. Here are five takeaways from that ride.

INSTANT ACCELERATION – There’s a lot of things that need to come together to create the kind of acceleration that makes you sit-up and take notice. We already knew the new 850 motor was a much quicker revving engine package compared to the old 800 Rotax. Now riding on set-up snow versus spring slop, it became even more evident. The big take away here is not so much the new REV-4 accelerates at a dramatically quicker clip than the MXZ of old, but rather how throttle control now allows you to control the overall attitude of the sled. Lifting the skis over trail bombs is now much easier and the overall lighter feel provided by this acceleration and improved weight transfer is just more fun to drive.

FRONT SUSPENSION SHOCKER – When Ski-Doo responded to Polaris Pro-Ride suspension with their r-Motion rear suspension, the ability of the rising rate skid to soak up nearly any trail anomaly with both comfort and control almost immediately exposed the front suspension of its short comings. The subsequent move to the RAS-2 front suspension was an improvement and enough to perform nearly equal to the rear. However the new RAS-3 front suspension, with an additional inch of travel and slightly revised geometry has finally done it. Our final ride was littered with long bombed out sections of trail that hadn’t seen a groomer in more than a week. This combined with cold temps forced the suspension to do all the work and not have ride characteristics become masked by soft snow conditions. Now the front not only keeps up with the rear…it out performs it.

MASKED PRECISION – If there’s one key area with the new REV4 platform where we still need more seat time it’s in the arena of handling. No question, the previous REV XS platform was the most precise, razor sharp trail sled we’ve ever thrown a leg over. The planted feel of the front skis truly created an on-rails characteristic that allowed you to slice up the most twisted trail you could find with uncanny accuracy. However the new platform throws a curveball into the mix by creating a lighter, more playful and less planted overall feel. Keep in mind we said “feel”. On the trail when running bumper to bumper with other sleds, the new REV4 was at the top of the game in tight trails. Obviously suspension set-up can have a dramatic impact on the “feel” and if we had to choose the more panted REV-XS or the fun to drive REV4, the new platform would get the nod every time.

NARROWED COMFORT – With a total of 5 full-days of riding with the new REV platform we can confidently say this is not only a sled that touts one of the most maneuverable cockpits we’ve driven, it’s also damn comfortable, at least for single day burns. Skeptical at first due to the vastly narrower seat and open cockpit configuration, we quickly reaped the benefits when romping through moguls or when moving far forward to iron out tight trails. In later rides we learned when the pace slowed and we inched back on the seat, the REV4 appeared to sacrifice little in terms of comfort as well. However, until we can log some big back-to-back days, the jury remains out on true long-range comfort, but thus far our backside is feeling very happy.

FIRST YEAR NERVES – Perhaps more than any performance attribute surrounding the new Ski-Doo model making would-be buyers hesitant, it’s the bad rap first year models have received in the past. For certain there is a lot of new going on with the REV4 but keep in mind the suspension and much of the chassis design attributes are known commodities. To help alleviate some of those hesitations, Ski-Doo is offering up a 3-year warranty on orders placed during their Spring Fever promotion with the option to add a fourth. Obviously we can’t predict what the future holds for the new REV in terms of reliability. However we do know this…the REV4 is at the top of our list for sleds to be in our stable for next winter…and we can hardly wait.