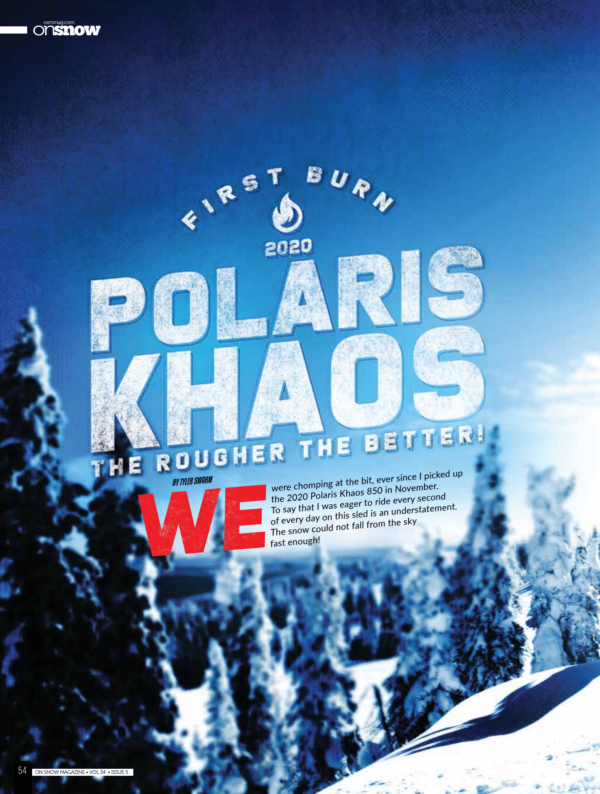 We were chomping at the bit, ever since I picked up the 2020 Polaris Khaos 850 in November.
To say that I was eager to ride every second of every day on this sled is an understatement. The snow could not fall from the sky fast enough! 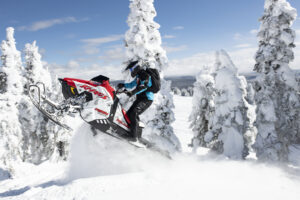 Get on your sled and ride!

I first rode the Khaos in February of 2019, while riding in front of the cameras for On Snow Magazine and Snowmobiler TV. Although I was only aboard this chaotic stallion for a few short hours, I knew right away that this sled was something special. As soon as we left the trucks at the parking lot, the rough, whooped out trail that led us up to the mountains was no match for it. Once we got up even higher, the Khaos showed us even more of what this mean machine could dish out. 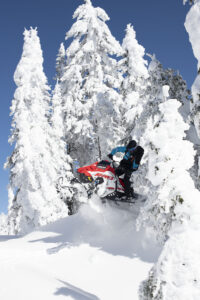 The best upgrade was the all new Walker Evans Racing Velocity shock absorbers, with both high and low speed compression adjustment and a piggyback reservoir. They really made for a smooth ride while skipping over the small bumps and also slamming into the big whoops. It is truly amazing to me that you can buy a new sled from the dealership that is equipped with shocks, and can be tuned to just about anyone’s personal preference. That’s a huge bonus for a guy like me because I used to spend thousands on high quality, aftermarket shocks to get the sled to feel just how I like it. Kudos to both Walker Evans Racing and Polaris for developing a one of a kind absorber that comes from the factory on the Khaos. 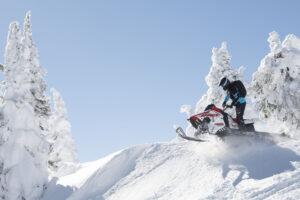 The second best feature, in my opinion, had me a little skeptical when I learned about it. That is the tipped up, rather acute rail profile. Being a deep snow hill climber for many years, I didn’t know why Polaris would make this change to a terrain dominating mountain sled. In my experience, the more parallel the tip of the rail is to the ground, the better opportunity the track has to climb on top of the snow, trench less and keep the skis on the snow. A less aggressive approach angle will also help create more momentum to get you up the hill faster. That’s why I was somewhat confused by this rail modification. I thought it would negatively affect the sled’s deep snow performance drastically. Once I tried it out, I completely understood why Polaris supplied this sled with a steeper rail profile. With these modifications, they had developed one of the most playful snowmobiles to ever be built at the Polaris factory.
Compared to the RMK, the Khaos is the king of wheelies, re-entries, hop overs, bow ties and jumps. It still climbs steep slopes extremely well, yet you can easily get the skis up and over obstacles like snow covered rocks and logs. I am not a very “brand loyal” rider because I just love the sport of snowmobiling in general, no matter the brand. But this sled really stands out on my favorites list because of how fun, playful and comfortable the Khaos is. 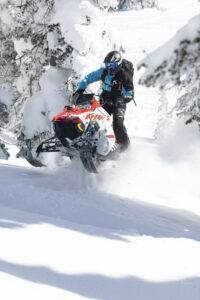 It still has the same proven AXYS chassis that has shown to be one of the best mountain platforms, due to its featherweight structure, and its rigidity from bumper to bumper that allows the rider to be in control 100% of the time. 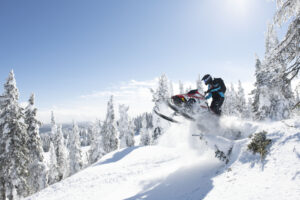 Third on my list of features on this mountain taming machine is the white knuckling torque from the 850 Liberty engine… it flat out RIPS! The pull when you punch the gas feels like that of a top fuel dragster!
After racking up nearly 500 mountain miles on my Khaos this season, I honestly feel like I have progressed as a backcountry rider. I look at the terrain in a whole new way, and feel more comfortable than ever when attempting big lines through the trees, as well as risky maneuvers in the air. I attribute much of this to the AXYS chassis, the Khaos suspension/skid frame geometry and the crisp, responsive 850 Liberty motor. 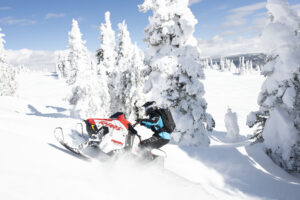 What would I change?

Personally, I would like to see are a bigger storage compartment behind the windshield, higher quality switches that control the high/low beam lights, high/low heated grips, and mode-select for the gauge. A heated throttle block from a manufacturer would be neat as well. Things got a little icy when it dumped four-plus feet in the mountains of Northern Idaho in the middle of January. Other than that, Polaris earned an A+ on the Khaos project!