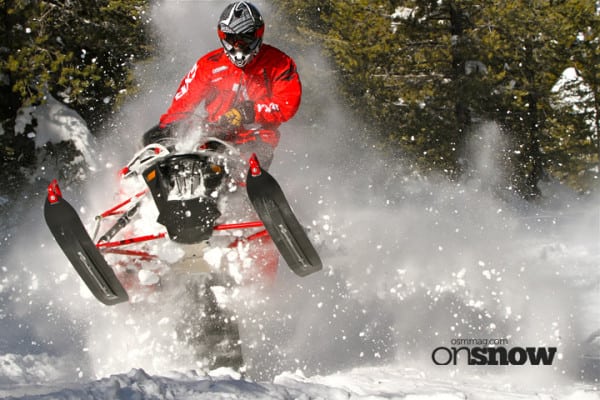 Everyone has a specialty in life…what that certain something is often times defines us, be it our personalities, our careers or in the case of snowmobiles, the attributes used to define performance and the riding experience. In the case of Yamaha Motor Corporation, the company has built of reputation of disrupting the status quo ever since if first burst onto the scene in 1968 with the all white SL350. That model and others that followed introduced the industry to technologies and ways of doing things that seemed foreign at first. Some were a stunning hit, others were cast to the edge of the trail. From oil-injection and Mikuni carbs to strut suspensions and handlebar mounted gauge pods with fairings to outside the box models such as the Phazer and the odd looking solo touring Inviter, Yamaha has always been willing to develop snowmobiles beyond conventional thinking.

When it comes to the new for 2017 Yamaha Sidewinder, some will scoff at the notion the factory turbo sled is as bold as some of the aforementioned innovations or snowmobiles. While at face value this might be true, upon closer inspection the new Genesis 998 turbo-charged engine is the kind of motor only Yamaha could develop, with a host of first-time innovations and a level of precision and scrutiny only Yamaha could deliver.

The all-new BTX category of sleds for Yamaha blends the line between pure mountain and crossover with a host of mountain goodies combined with a wide 40-inch stance front. As with all Sidewinders, the biggest challenge proved to be holding on when lighting the lamp.

The mission for Yamaha started several years prior to the announcement of the 2017 line-up. After analyzing the market and its direction, Yamaha simply pointed to a void in the power plant matrix of the industry and said, “We need a 180-horsepower snowmobile”. While that may sound like a simple task for a “motor” company with the wherewithal of Yamaha, the performance parameters they wanted to hit with the future powerplant were daunting to say the least.

While we won’t get into all the specifics, the new Genesis 998 mill needed to not just be powerful, but it had to deliver its over the top power without the negatives commonly associated with turbo boosted engines. It had to be smooth…it had to have no hesitation…it had to have instant response…and in traditional Yamaha fashion it had to be drop dead reliable.

It’s too early to call when it comes to the reliability of the new engine, although Yamaha’s track record in this arena has earned them an A-plus rating, they’ve absolutely nailed the performance deliverables. The new motor is silky smooth from first start-up to the in-your-face punch during acceleration to the stunning top speed and full-shift rpm scream it delivers up top. When it comes to pure performance, it’s extremely difficult to find a single scab with this engine.

Frankly we were surprised to find the Yamaha Sidewinder RTX in the “shorty” 129-inch track length. Finding adequate traction to harness the pure power and acceleration of the turbo motor is nearly impossible. If you’re looking for ridiculous power in trail trim, opt for the slightly longer and more stable 137-inch version in LTX trim.

Swiss Watch Technology – We could spend paragraphs detailing all of the technology that went into the development of the new motor. For gear heads who get their kicks out of this sort of information, Yamaha has done a deep dive on the inner workings of the new motor on their website. For the rest of us who would rather pull the trigger on this beast here’s the high level view on what you need to know.

It all starts with a three-cylinder engine that was reworked from the crank up to specifically handle and deliver the power of a boosted engine. While the architecture is similar to other Genesis engines of this very nearly same displacement, the 998 was reworked in every key area, from a new press forged crankshaft and heat treated cam shaft to specially built low-compression pistons and ceramic composite coated cylinders.

While the Sidewinder will garner most of the attention for Yamaha in 2017, overlooking the Viper line next winter could be a big mistake. Subtle improvements to ergonomics and even bigger improvements in ride quality thanks to the switch to FOX coil-over shocks on several models has the 2017 Viper line delivering the best ride quality to date.

From there the technology runs deep in order to make this turbo do more than just deliver raw power, but to do so with stunning predictability and smoothness. One area of particular interest is the use of a triple throttle body set-up versus an easier to tune single three into one configuration. The triple intake design is a first for any production turbo application and is a key innovation that allows the Genesis 998 turbo to deliver seamless power.

Another key techno-bit is the use of two different types of controls to control boost pressure and throttle response. The use of a solenoid controlled waste gate bleeds off excess boost pressure; while an Air Bypass Valve is utilized as part of a closed loop system that in essence keeps boost “built-up” in the system even when  not on the throttle. In layman’s terms this bypass loop eliminates the lag often associated with turbo systems where the motor must first “spool-up” in a normally aspirated mode thereby allowing the turbo to spool up and start delivering the added power benefits of a forced charge.  The bypass loop retains this boosted charge in a continuous loop and is at the ready to inflict its compressed charge inside the triple Genesis motor the second you start to open the throttle bodies.

The heart of the new Genesis Turbo engine is obviously the fixed mounted turbo. Featuring a nickel alloy body, the unit is both strong and precise and touts high-grade ceramic ball bearings and a turbine blade assembly made from super alloys. The lightweight and compact design allows the turbine to “spool-up” at lightening speeds resulting in right now power like we’ve never before experienced in a turbo application.

Good on Paper…Even Better On Snow – The bottom line… the new Sidewinder is an absolute bullet. From initial start-up the engine runs with a smooth staccato that will make most bit city symphony orchestra’s go running back to the practice room. From there power comes on in gobs, but in a smooth, easily managed procession that is as little or as much as your right thumb dictates. Whack the throttle and the Sidewinder responds with instant thrust with no hint of a hiccup or letdown all they way up to the full-shift and hyper speed thrust of its 8750 operating speed.

Failing to ascending up the big powder filled hills won’t be due to a lack of power with the Sidewinder. Find a line, aim and squeeze.

Simply put there is no question the new Sidewinder is a power house, and while the four-stroke Yamaha fold will continue to tip the scales with a weight penalty compared to comparable two-strokes, nothing will touch the Sidewinder when it comes to its power to weight ratio. A quick tally of the horsepower and weight numbers gives the easy nod to Yamaha with an industry best power to weight ratio that is more than 30-percent better than the next closes competitor in the 800, big bore class.

To handle all this power, Yamaha reworked their drive and driven clutching mix. The drive clutch moved the fly-weight pivot points outward, thereby creating more pinch to the belt, yet still allows the use of all existing fly weights for tuning. The secondary was also improved with new castings for strength and a roller cam. The end result is a clutch system that can handle the turbo thrust, has an increased effective drive ratio allowing the use of lower final gears, and has quicker backshift keeping the Sidewinder in the “right gear” when coming in and out of the throttle on either a twisted trail or boondocking through the trees.

Yamaha made sure the new Sidewinder could find a home for every rider as well, creating a Sidewinder in RTX, LTX, STX, XTX, MTX and an all-new BTX configuration. The BTX is a new category for Yamaha in the quick evolving crossover category. Available in both SE and LE versions, as are most of the above-mentioned models, the BTX is the ultimate boondocking buggy in the Yamaha stable. It combines the lightweight and sculpted mountain focused front spindle and A-arm design in a wide 40-inch stance with sway bar. From there the sled becomes more mountain focused with 153-inch track, mountain handlebar with vertical steering post and uncoupled rear suspension. The limited edition version opts for Float EVOL R air shocks up front, heated seat, and a 2.25” lug track; while the Special Edition version touts a more versatile 1.75” Powerclaw track, FOX Float 3 shocks, and special graphic packages.

To not only harness the bolstered turbo power of the Sidewinder, but to also ensure belt durability, both the drive and driven clutches have been significantly reworked. The secondary features new sheave castings with cam roller design while the primary has moved the towers and flyweights further out to give the drive sheaves more leverage and greater belt squeeze.

The BTX, MTX and XTX LE models also receive a new mountain ski that Yamaha proudly boast has the biggest and deepest keel in the industry. While the ski does deliver improved flotation and better side-hilling versus the previous version, the jury is still out on the big keel. In pure powder snow the effects are beneficial, but in packed snow, spring snow or on trail, the massive keel produces heavier steering effort and a hint of unpredictability during our first ride evaluation.

Coil Springs Get the Nod – Just as was the case in the Arctic Cat camp, several Yamaha Viper models have made the switch from air to coil-springs in 2017. Most notable are the Viper SE models which now feature FOX SE shocks with rebound control and Viper LE models touting the easy to adjust and easy to discern ride characteristics of the FOX Quick Switch 3 shocks.

No matter the Sidewinder we threw a leg over the results were always the same. You simply can’t help whipping the track into a frenzy and lofting the front-end of the buggy over any obstacle in your path. Addictive power at its best.

While much of the Viper line remains unchanged for 2017 save some subtle enhancements such as smaller grips, lighter handlebars, slightly longer front arm shocks for better bump absorption and improved headlamp thanks to a new reflector design; the ride improvements of the coil-over shocks are definitely the big caveat for next winter, especially in terms of comfort and stutter bump control. The new suspension package also allows the sled to exhibit better “ride-in” which in turn improves handling.

The final item of interest is the return of a two-stroke engine to the Yamaha fold. Unfortunately for two-stroke fans, the enhanced and powered-up VK540 utility machine will not mark the possible future return of two-stroke power to other parts of the line-up, but it does foreshadow Yamaha’s long-term commitment to the snowmobile business beyond the current relationship with Arctic Cat.

Editors Note: For more photos, captions and details on the new 2017 Yamaha snowmobiles, check out our Spring issue of On Snow Magazine hitting newstands and mailboxes at the end of March.