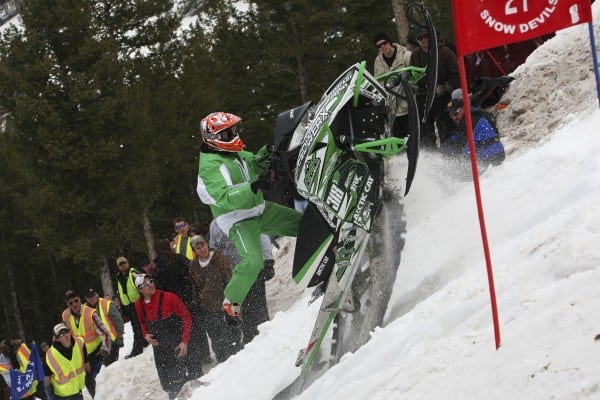 Where there is racing, you’ll find FOX Racing Shox; and more often than not they are always near the top of the podium. Such was the case in Jackson Hole, Wyoming where FOX athlete Kyle Tapio took top honors with his FOX equipped Arctic Cat. Here’s the official word from the FOX Racing Shox crew:

BAXTER, Minn. — Facing a near vertical assault of snow and ice-covered rocks and stumps, FOX athlete Kyle Tapio rose above a field of world class competitors to conquer Snow King Mountain and win the King of Kings crown at the Jackson Hole World Championship Snowmobile Hill Climb in March.

When it comes to snowmobile hill-climb competitions, no other course in the world is considered more demanding and no other victory more coveted. From the bottom, the Snow King track launches competitors toward the summit up a 45-degree 1,500 foot course lined with a series of gates and littered with ruts, huge craters and massive moguls.

To become a champion, racers must possess incredible athleticism, riding skill and a well-balanced snowmobile with plenty of power and, perhaps more importantly, a suspension that can absorb the terrain while keeping the track on the snow.

“It takes more than power and a good driver to win at Jackson Hole,” said Team Arctic’s Hill Climb Race Coordinator Al Shimpa. “Having quality shocks and being able to tune them quickly as conditions change on the hill is vital. FOX shocks played an important role in our success.”

Tapio and his squadron of Arctic Cat race sleds scorched the Snow King course with runs unequaled by his closest competitors. By doing so, Tapio won the Improved and Mod King titles, which gave him the overall King of Kings crown — the best racer at Jackson Hole.

The strong performance by FOX athletes and FOX-equipped Arctic Cat snowmobiles was evident in other classes as well where six different racers earned 10 victories.