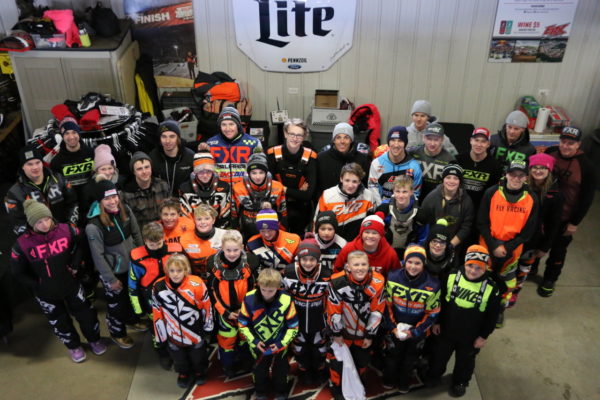 Elk River, Minn. January 14, 2019 – More than 40 youth snocross riders and over 15 of today’s most respected and fastest professional racers came together for the FXR Learn 2 Ride Clinic at ERX Motor Park in Elk River, Minnesota during the 2018 holiday break. The FXR clinic plays an instrumental role in the future of snowmobile racing and the sport in general as students learn how to become better racers on and off the track from their peers and heroes.

This year marked the 10th anniversary of the clinic, and many of the coaches were former students of the program illustrating the event’s ongoing success. This year’s coaches included current national racers Kyle Pallin, Evan Daudt, Ryley Bester and Taven Woodie.

“Another great clinic,” said FXR Marketing and Special Projects Manager Doug Rust. “FXR is blessed to be working with such great athletes who are willing to take time out of their schedules during the holidays to give back to this sport. It’s incredibly rewarding experience and we’re honored to be a part of it.”

The FXR Learn 2 Ride Clinic features a day dedicated to 120/200 riders and another for older riders on full-size snowmobiles. Participants are given one-on-one coaching to further refine their skills for different aspects of the track including cornering, jumps and starts. In addition, the coaches and other industry experts share tips and lessons on sportsmanship, promotion, and set-up during brief classroom sessions.

“It (the clinic) was awesome,” said Shawn Peterson, who had two children participating. “We loved how many pro riders were there…they gave great coaching and it was very well organized.”

“FXR gets it,” said Carlson. “They truly care about the future of this sport and its evident by the amount of time and resources they invest into events like this. Their vision and the passion of their riders is what makes the FXR Learn 2 Ride Clinic work.”

ERX Motor Park is the Midwest’s premier year-round motorsports and event facility, featuring off-road and snowmobile racing, our very own Beater-X® series, concerts, charitable events and so much more. For a full list of events, visit erxmotorpark.com and follow us on Facebook, Twitter and Instagram.