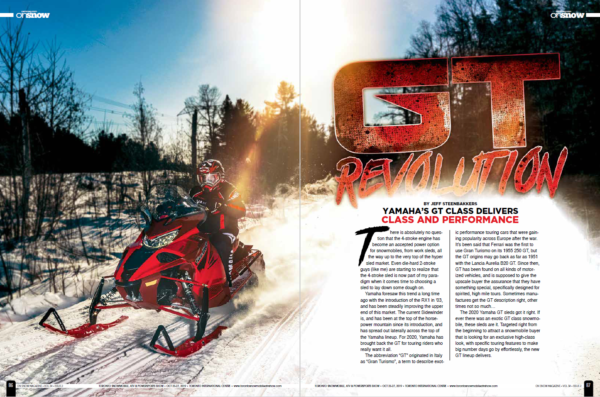 There is absolutely no question that the 4-stroke engine has become an accepted power option for snowmobiles, from work sleds, all the way up to the very top of the hyper sled market. Even die-hard 2-stroke guys (like me) are starting to realize that the 4-stroke sled is now part of my paradigm when it comes time to choosing a sled to lay down some dough on.

Yamaha foresaw this trend a long time ago with the introduction of the RX1 in ’03, and has been steadily improving the upper end of this market. The current Sidewinder is, and has been at the top of the horsepower mountain since its introduction, and has spread out laterally across the top of the Yamaha lineup. For 2020, Yamaha has brought back the GT for touring riders who really want it all.

The abbreviation “GT” originated in Italy as “Gran Turismo”, a term to describe exotic performance touring cars that were gaining popularity across Europe after the war. It’s been said that Ferrari was the first to use Gran Turismo on its 1955 250 GT, but the GT origins may go back as far as 1951 with the Lancia Aurelia B20 GT. Since then, GT has been found on all kinds of motorized vehicles, and is supposed to give the upscale buyer the assurance that they have something special, specifically designed for spirited, high mile tours. Sometimes manufactures get the GT description right, other times not so much…

The 2020 Yamaha GT sleds got it right. If ever there was an exotic GT class snowmobile, these sleds are it. Targeted right from the beginning to attract a snowmobile buyer that is looking for an exclusive high-class look, with specific touring features to make big number days go by effortlessly, the new GT lineup delivers. 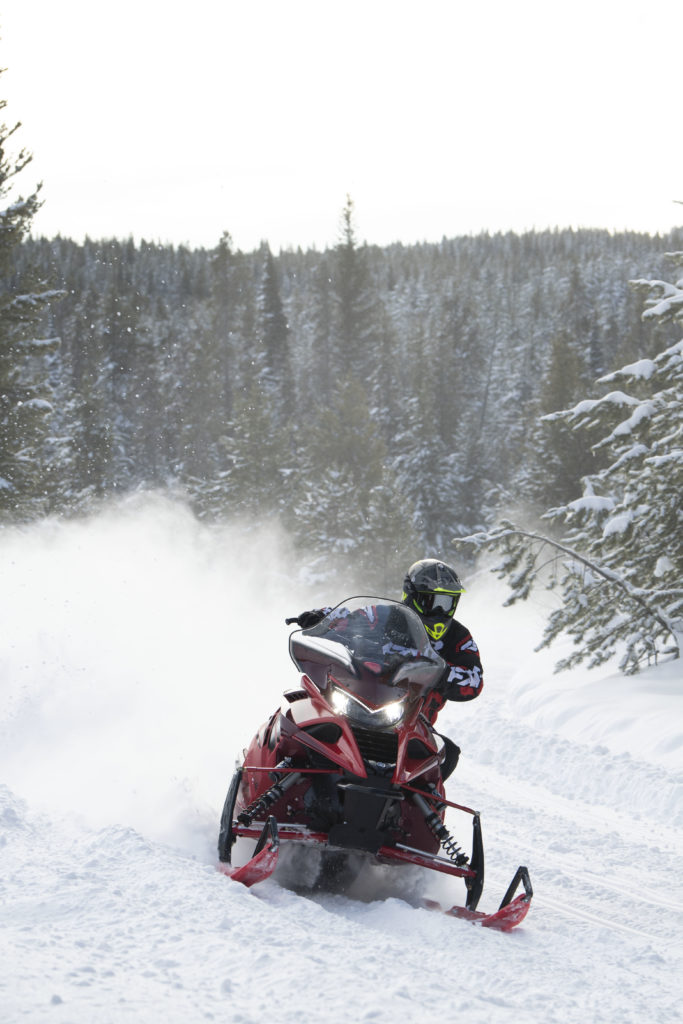 Not exclusive to the GT lineup, all 2020 SRVipers are now clad in the Gen 2 bodywork, drawing on the styling of the Sidewinder line. What’s exclusive is the deep, almost candy Velocity Red that is found across the GT line. On the snow, this colour stands out without shouting out. This should appeal to owners who want to be noticed, but not mistaken for someone who greets riding buddies with “Yo-Dude”.

Under the brightwork is the updated Genesis 1049cc engine. A new ECU tune is responsible for a small uptick in power on the 3-cylinder mill. Although difficult to feel the change in power, the 2020 engine seems to come alive a little quicker than in previous generations. Competing in the 125-horsepower class of sleds, the Viper puts the power down through the 137 Ripsaw track with authority, thanks to a strong 4-stroke torque curve. In addition, this engine has become a standard for efficiency and durability, against which all others are judged. I suspect this is one thing that hasn’t changed for 2020. 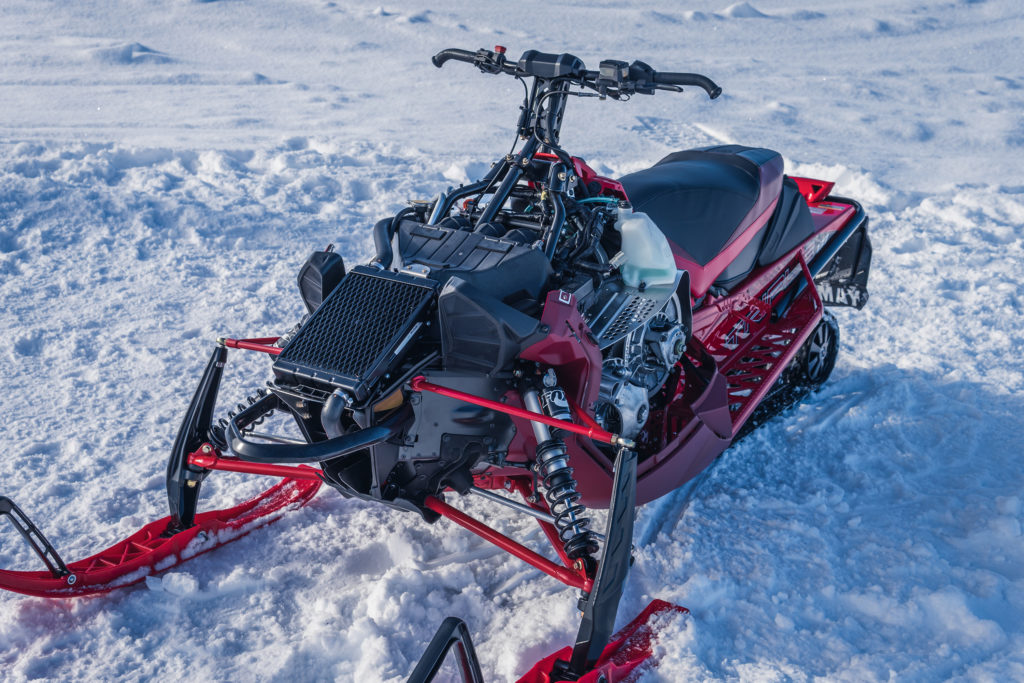 The Yamaha line is built on a super rigid triangulated SRV chassis. The pyramidal design centers the mass around the rider while strengthening the chassis without excessive weight.

Additional features which should appeal to the high mileage crew are a tall windshield and heated seat. Riding the SRViper GT into the cold evenings is not a problem behind the big window, and the heated seat takes just enough of the edge off to be effective. Personally, I thought a heated seat on a sled was about as useful as an inflatable dartboard, but after experiencing a heated seat on a particularly cold night in Quebec, I see the light, or rather, I felt the heat. However, if there was one suggestion I’d make to Yamaha on this one, I’d ask for just a bit more temperature out of the system. 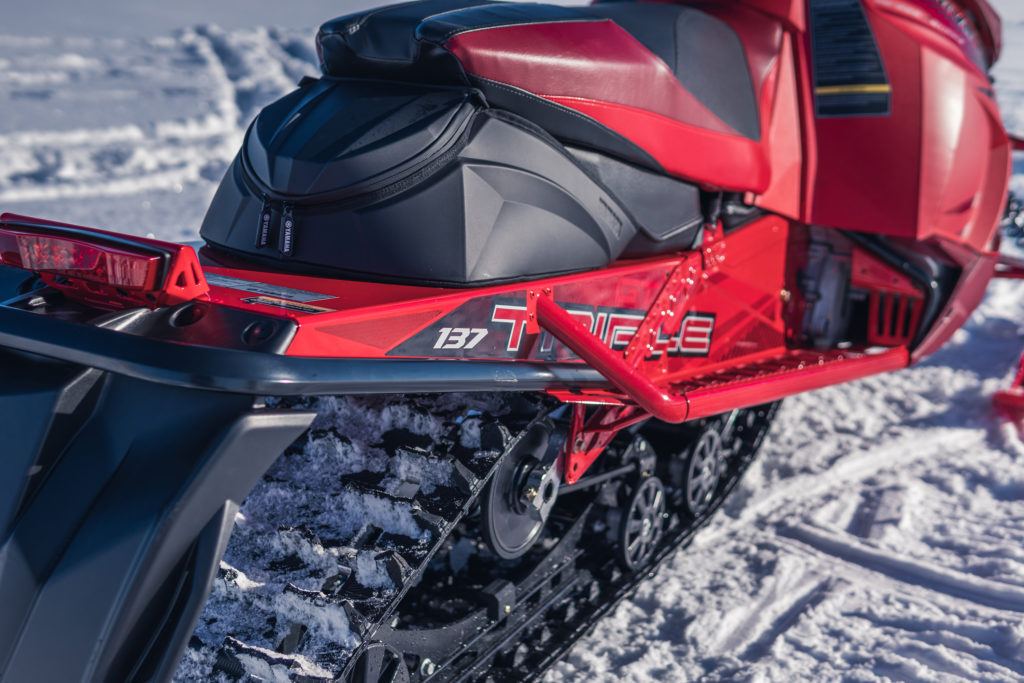 The 137 inch Camso Ripsaw with 1.25″ lug is found on both the Sidewinder L-TX and SRViper L-TX GTs. This track delivers awesome all round performance when it comes to acceleration and breaking.

Under the front end of the SRViper GT is the new ARCS front suspension which improves the roll center with a redesigned forged spindle and lightweight A-arms. Holding it all up are Fox 1.5 ZERO QS3 front shocks, and their easily adjusted 3 position clickers on the shock body. Out back is the Dual Shock SR137 skid frame. The front shock is a 1.5-inch HPG, while the rear shock is three position Fox 2.0 ZERO QS3. Every one of our riders agrees the FOX QS3 is the way to go for how well they work and their simplicity to adjust for non-geek riders. However, it would have been nice to have the electronic iQS versions of these shocks on the GT version of the Viper. 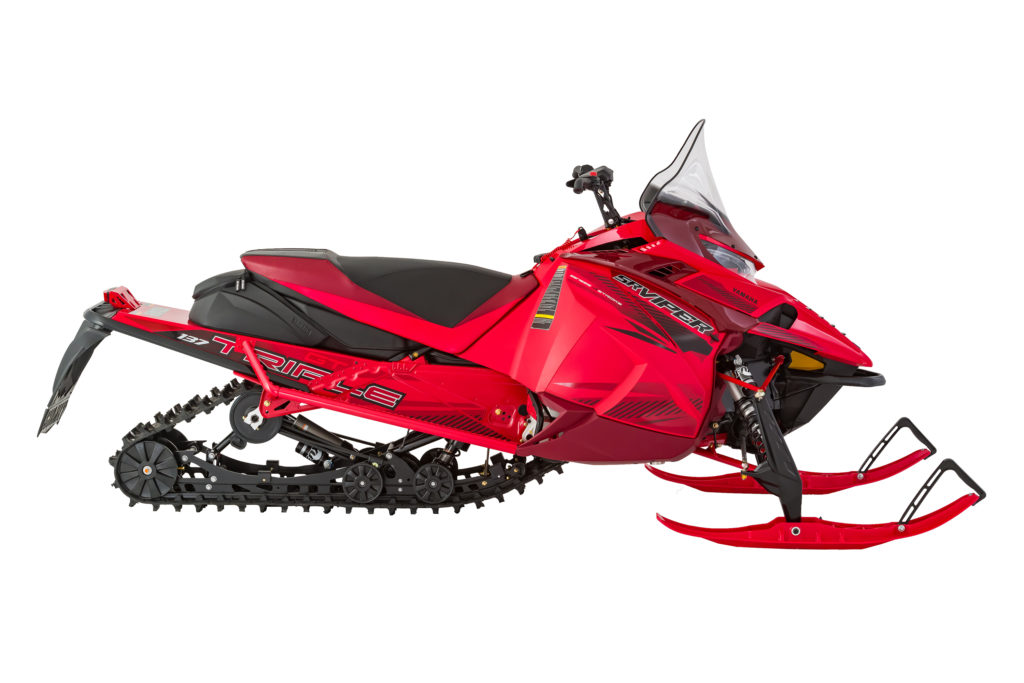 After spending some time on the Viper GT in the closing miles of last season, I feel consumers who opt into the GT version will come away more than satisfied with the performance of the engine and suspension systems, along with an appreciation to the details and elegance the GT designation provides. 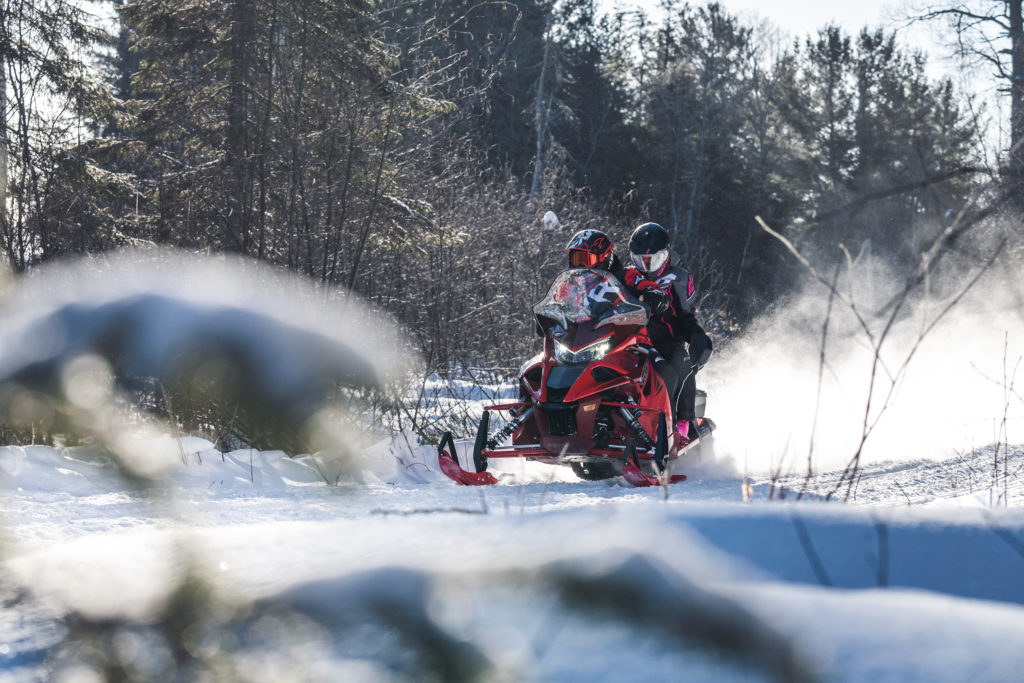 A completely new model for 2020 is the Sidewinder S-TX GT, which is the Grand Poohbah of 2-up touring sleds. That’s right, you and a friend can experience 200 turbo’ed horsepower in luxury and style as you blow past just about everything else on the snow. All kidding aside, this sled should fill a niche in places like Quebec, where triple-triple 2-up touring enjoyed a good run back at the turn of the century.

This model carries the now familiar Velocity Red that is the best visual cue to identify the GT line, along with the large windshield, engineered to direct airflow around the riders. The 2-up GT also features king and queen heated seats, a fully adjustable backrest and extra storage. The GT storage case also offers an additional 15 litres of fuel capacity in its auxiliary tank, bringing the total fuel load to 49.9 litres. 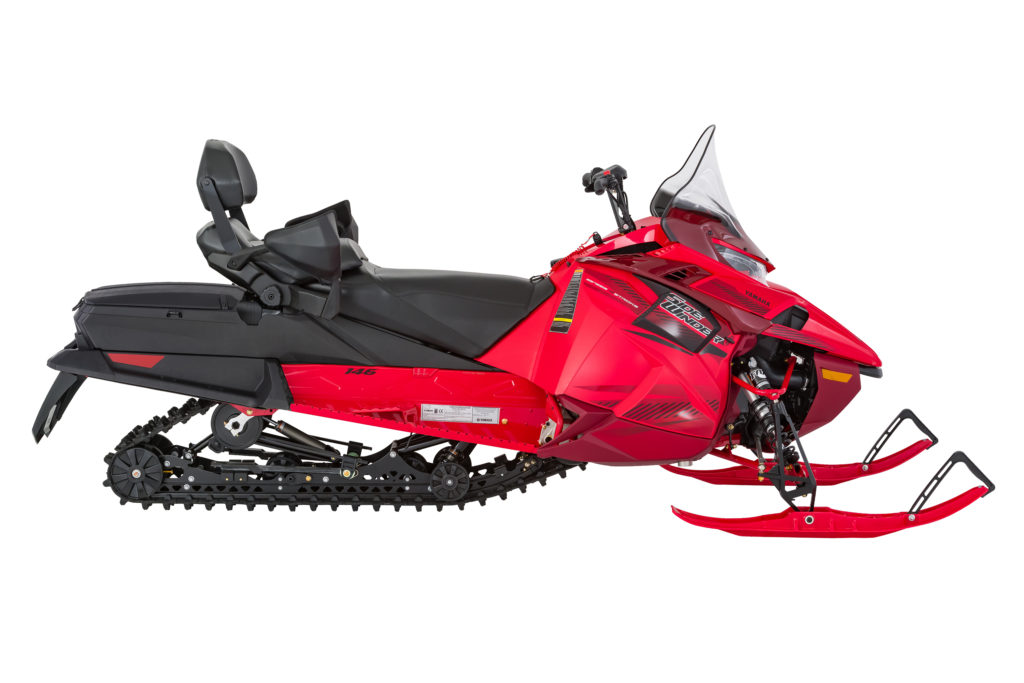 The rear suspension is a Dual Shock SR 146 skid-frame with overload springs that can be engaged as rear loads increase. Cam style flippers rotate up, allowing the composite leaf springs to assist the torsion spring on the rear arm for a simple and effective solution to control the weight of a passenger and extra gear. The front suspension does not receive the ARCS update. However, the 3-position adjustable Fox QS3 shocks have found a home in the S-TX. 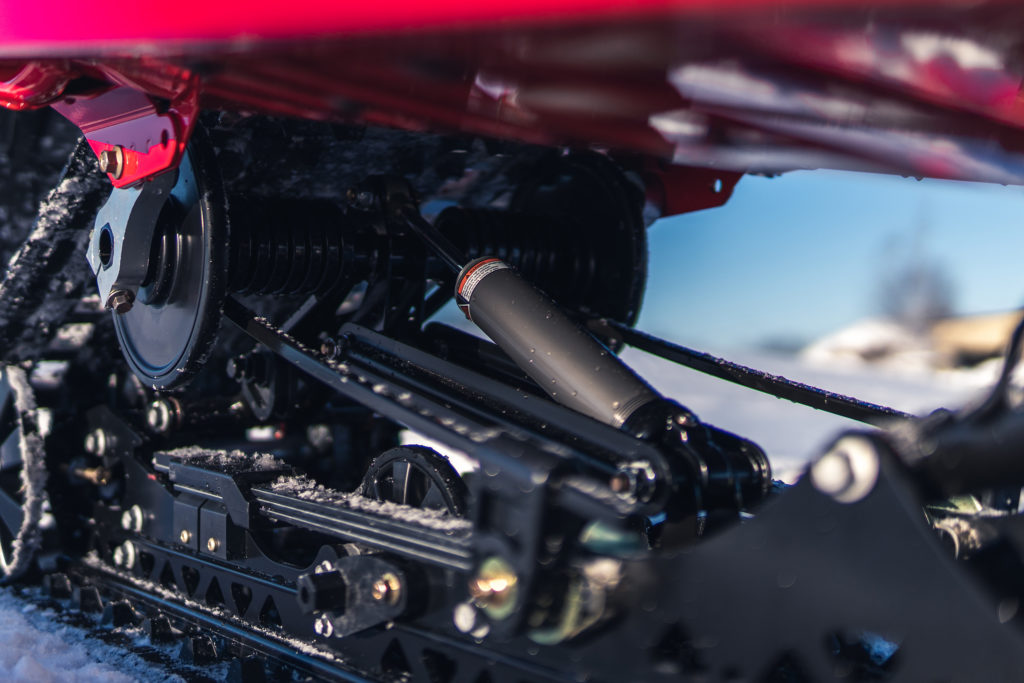 The 146″ skid frame on the S-TX GT, has easily deployable overload springs for those heavy days.

Alone on the S-TX GT, this machine feels very similar to other Sidewinders in the Yamaha lineup, especially ones with the longer rear skids. In fact, without the big windshield and support of the backrest, the ride experience is very similar to an X-TX. And like other Sidewinders the endless power of the 998 Genesis Turbo engine is a thing of beauty, but it demands respect. 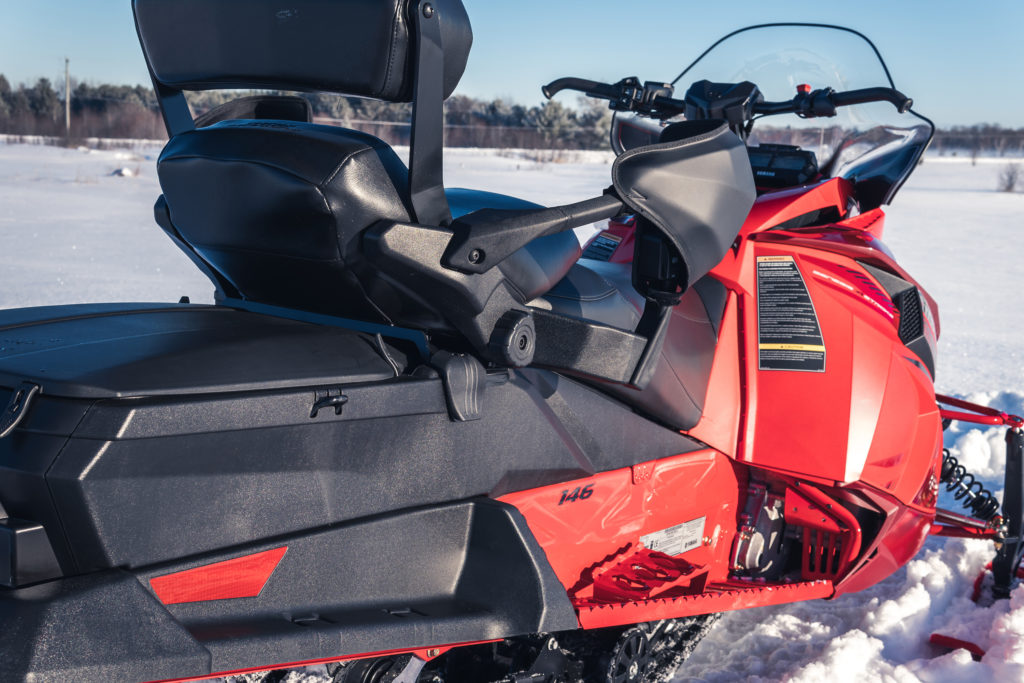 The backrest can be adjusted forward for 1-up riding, or can be removed along along with the passenger seat if that’s the way you want to roll.

2-up, ride characteristics do change with the addition of a second person. Handling and speed have a direct connection to the involvement of the passenger. Getting in sync as two riders, a surprising pace can be maintained in the curves, then a quick shot of throttle will propel you and a passenger back to the back bumper of just about anyone in front of you. Get out of sync and the pace will slow, but when things straighten out, the turbo power will get you caught up to the group in a hurry. 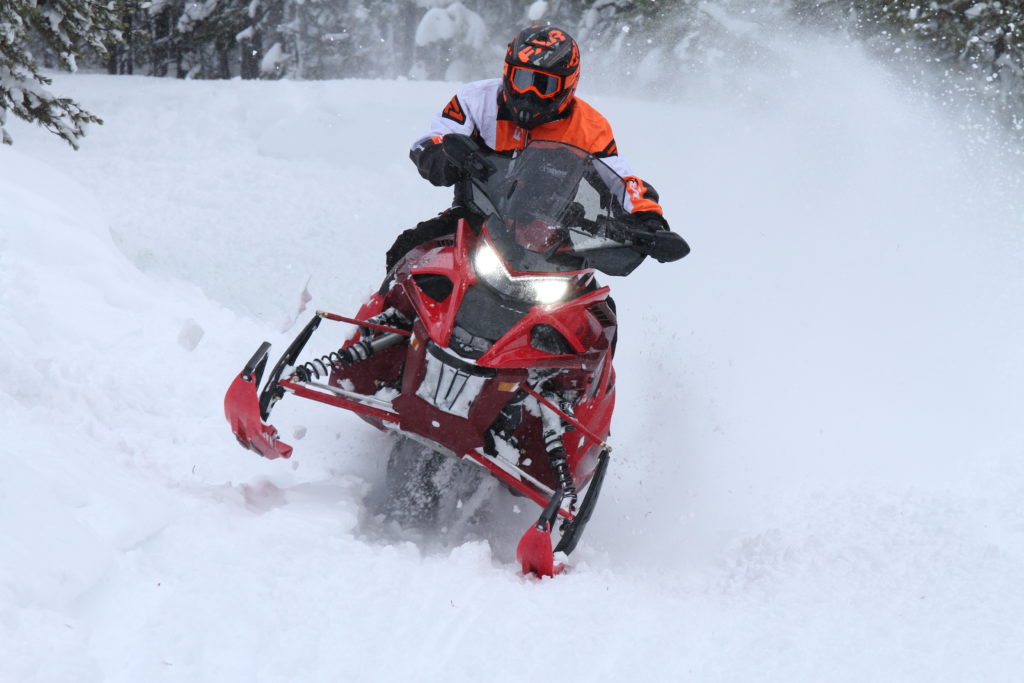 The Sidewinders L-TX GT is aimed squarely at the top of the touring market. Legendary Genesis Turbo power and luxury touring amenities have come together to create this sled, which is again found in the classy Velocity Red livery. Squeezing the trigger on the L-TX GT is every bit as exciting as other Sidewinders in the lineup, but this one comes with features that even non-GT class riders will crave.

It may sound like a little thing, or it might just be that I’m getting older, but the wind protection of the large windshield and warmth of heated seat are welcome additions to this Sidewinder. In fact, any Sidewinder for that matter, given the speed these sleds can achieve. In the GT line, this protection comes standard. 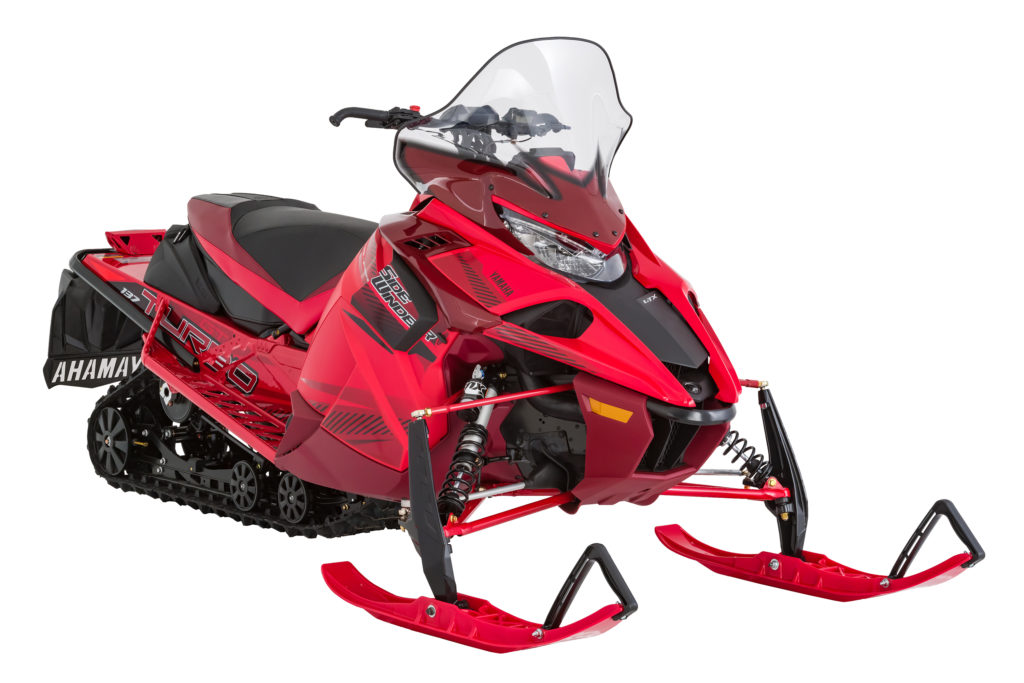 The suspensions on the Sidewinder L-TX GT are very similar to the SRViper L-TX GT. Like the Viper, this model receives the new ARCS front suspension with its improved geometry, along with the Fox ZERO 1.5 QS3 shocks. And like the Viper, we wish it had the electronic iQS versions. In the rear, the Dual Shock SR 137 rear suspension is providing the excellent bump absorption, with an HPG center shock and Fox ZERO 2.0 QS3, similar to the Viper’s setup. 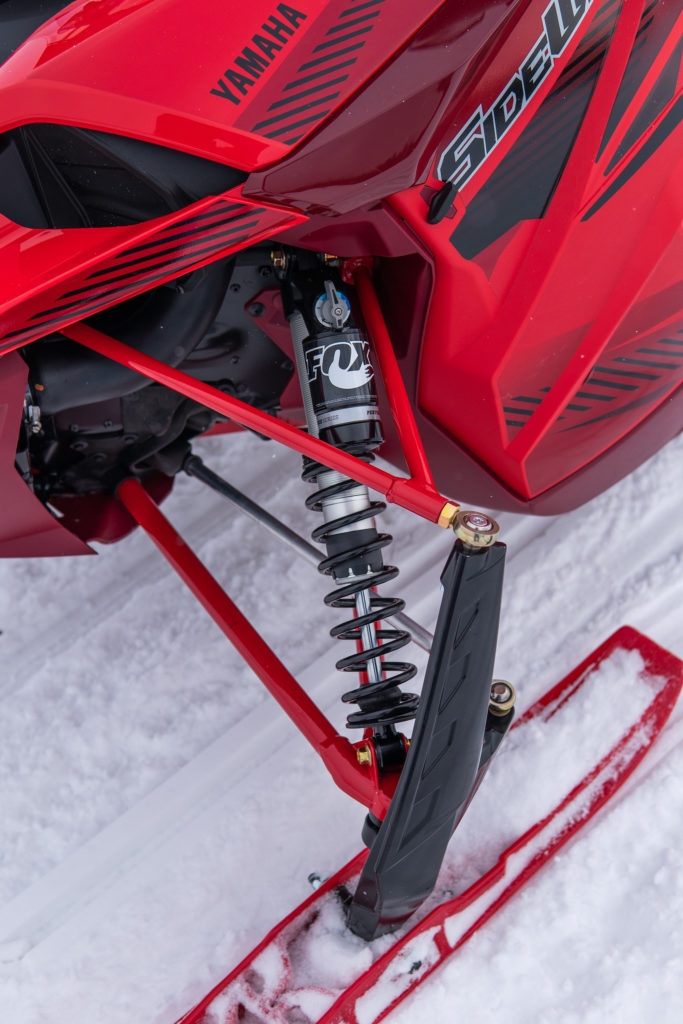 Every GT gets the Fox QS3 shocks up front, but only the Sidewinder and Viper GT’s get the new ARCS front suspension.

On the trail, the GT is a place where you can spend a day, and then spend another day, and even another day after that. For big mile, multi day tours, you can’t get any better sled out of the Yamaha barn than the Sidewinder L-TX GT. There isn’t even any compromise for a short-day ride either, this machine is very well rounded. Even the engine, despite being the most powerful available in the snowmobile industry, is equally at home at the radar run, or puttering around all day on a family ride, where speeds barely reach double digits. 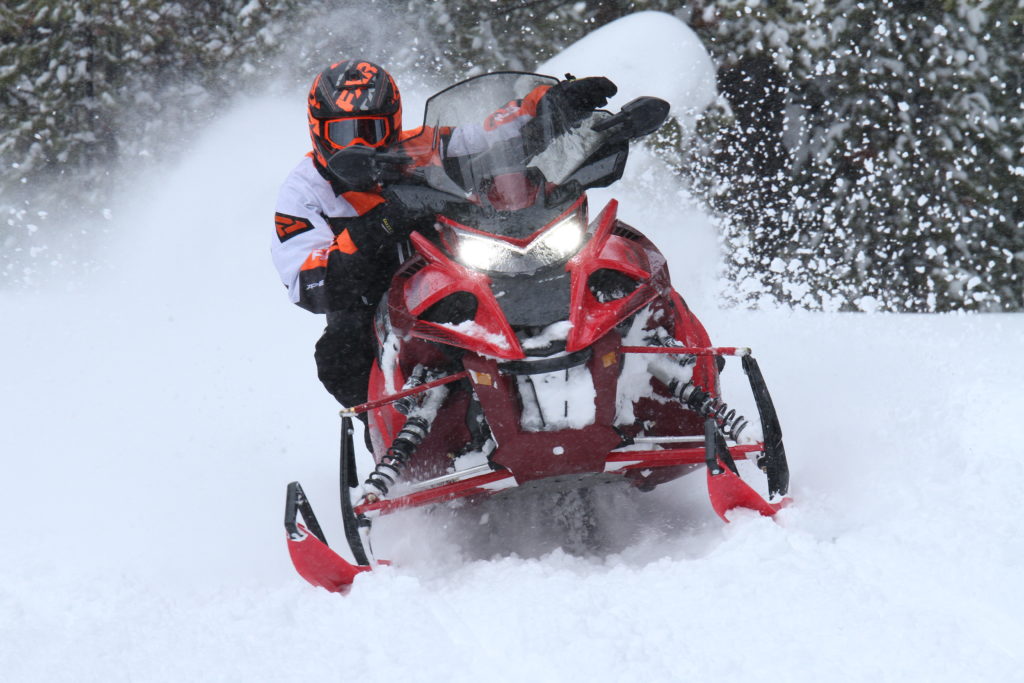 The big windshields found across the GT lineup will keep riders happy on cold, big-mile days by keeping you out of the jet stream.

To wrap things up, we have to acknowledge that bringing home any one of these GT models is not going to be a cheap option. These are pricey sleds, with no apologies made for that fact. But they do give back a significant return on the investment when you factor in the longevity Yamaha snowmobiles are known for. These sleds have been conceived to burn down one high-mileage season after the other.