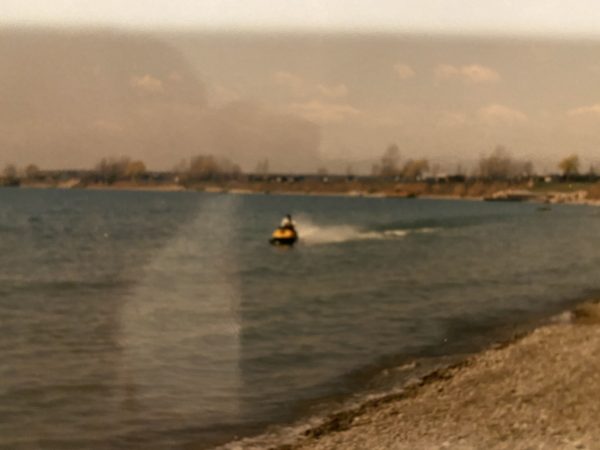 Since the 1960’s, stories of water crossings on snowmobiles have long been told around the fireplace with grandpa, and during the late nights spent in the shop. The art of “water skipping” was only attainable by the late 60’s when snowmobiles were capable of achieving the necessary speed of twenty-eight to thirty miles an hour on water. Before this achievement, snowmobiles were better known as “sinkers” if there was any significant stretch of water.

In the 1970’s, there were so many stories of reckless snowmobilers skipping over short sections of open water, it was becoming more normal than not hearing about it. However, in the 1970’s, the stretches of water people were skipping on their snowmobiles usually wasn’t more than 50 feet. 100 feet was considered plain insanity.

In the Late 1970’s to early 1980’s, the Maki Brothers from Wisconsin began racing on water (skipping) and holding watercross competitions. With their success with this type of racing, competitions started to sprout up everywhere in the warmer months in the American Midwest, and watercross racing was recognized as a sport.

Across the melted North American Snowbelt, the sport emerged and the popularity of watercross took off, gaining respect from a unique bunch, and at the time they were better known as “daredevils”. Similar to the way the Midwest welcomed watercross competitions, as did the towns of Pendleton, New York and Jordan, Ontario. Enthusiasts were drawn from far and wide to see snowmobiles cross water, with the hope of possibly seeing one sink.  During this period is when Henry Bieda noticed watercross racing, and being a daredevil type himself, he took to it. 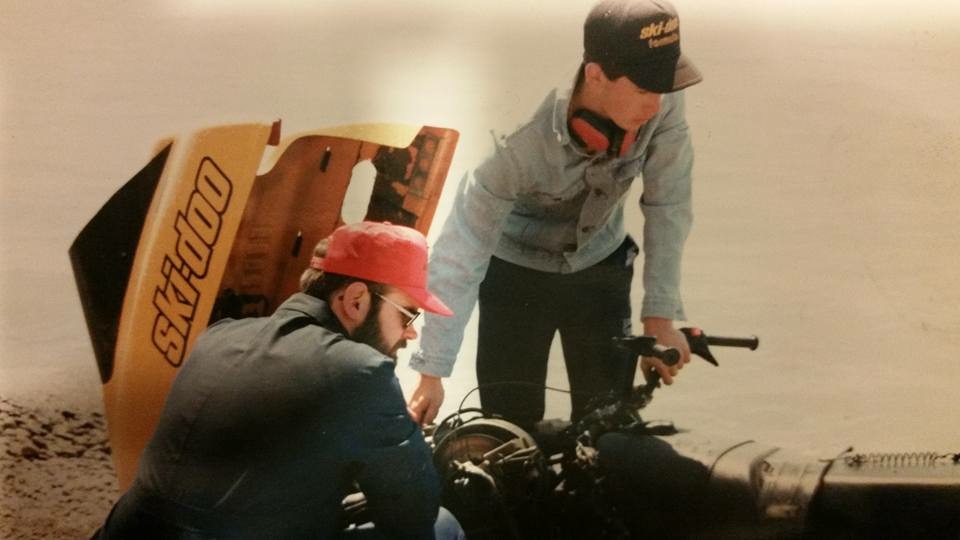 Before Henry started watercross racing, he already had a successful racing career in snowmobile grass, drag, and ice oval racing. He also owned a Ski-Doo dealership. Using his basic know-how and technological knowledge, and drawing from his contacts, he started working out how he could go further on water than the others. But his watercross racing days were not forever. After a few years of dominating every regional race,  he started to lose interest in the sport. The challenge wasn’t what it once was, and his summertime hobby ended up on the shelf.

Taking a snowmobile across water never came to the forefront again for years to come. It wasn’t until Henry’s son, Stephen Bieda, won first place in a New York State Grass Drag Championship in 1987. After Stephen’s win, the local media interviewed him and asked the question, “what lies in the future for G.L.F. Racing?” (G.L.F. Racing was the race team that the Biedas belonged to, along with a few others) Stephen, humorously, let the local newspaper know that Henry’s (his father dream was to cross Lake Ontario on a snowmobile. Stephen never thought anymore of the interview or the answer, and went home to Fenwick, Ontario.

The story and interviews of the winners of the grass drags was printed in the local New York State newspaper, and the story of Henry wanting to cross Lake Ontario on a snowmobile blew up.  Other newspapers jumped on the crazy idea of riding a snowmobile across Lake Ontario and were publishing more content on this daredevil from Fenwick, Ontario, Henry Bieda. Like all daredevil types, Henry felt obligated to do it once the news broke of his idea. He had to make this a reality. If not, he was just someone blowing smoke.

This idea/stunt sprouted legs and really started to come together. One of the employees at Henry’s dealership Paul Prudhomme and G.L.F. Racing team member, Gary “the doctor” Potyok began gathering parts and pieces of what they felt would be the ultimate watercross snowmobile.

By the spring of 1988, the excitement had built around the stunt, and everyone was anxious to test the 1985 Ski-Doo Formula SS, featuring a 1983 521cc Rotax engine, a lightweight chassis with a smooth aquadynamic type of bell pan (hull) and a custom seat by Miller’s Upholstery. The snowmobile was even appropriately nicknamed “Wally”. This is when and where Henry realized that he needed a location to water test “Wally”.

At this time, at the forefront of Henry’s mind was to silence all of his critics that said, “He’d have a better chance of making it to the moon than across Lake Ontario”. These types of comments and doubt didn’t sit well with the likes of Henry Bieda.  In order to properly test “Wally”, he’d have to build himself a lake. He did and properly named it “Lake Bieda”. 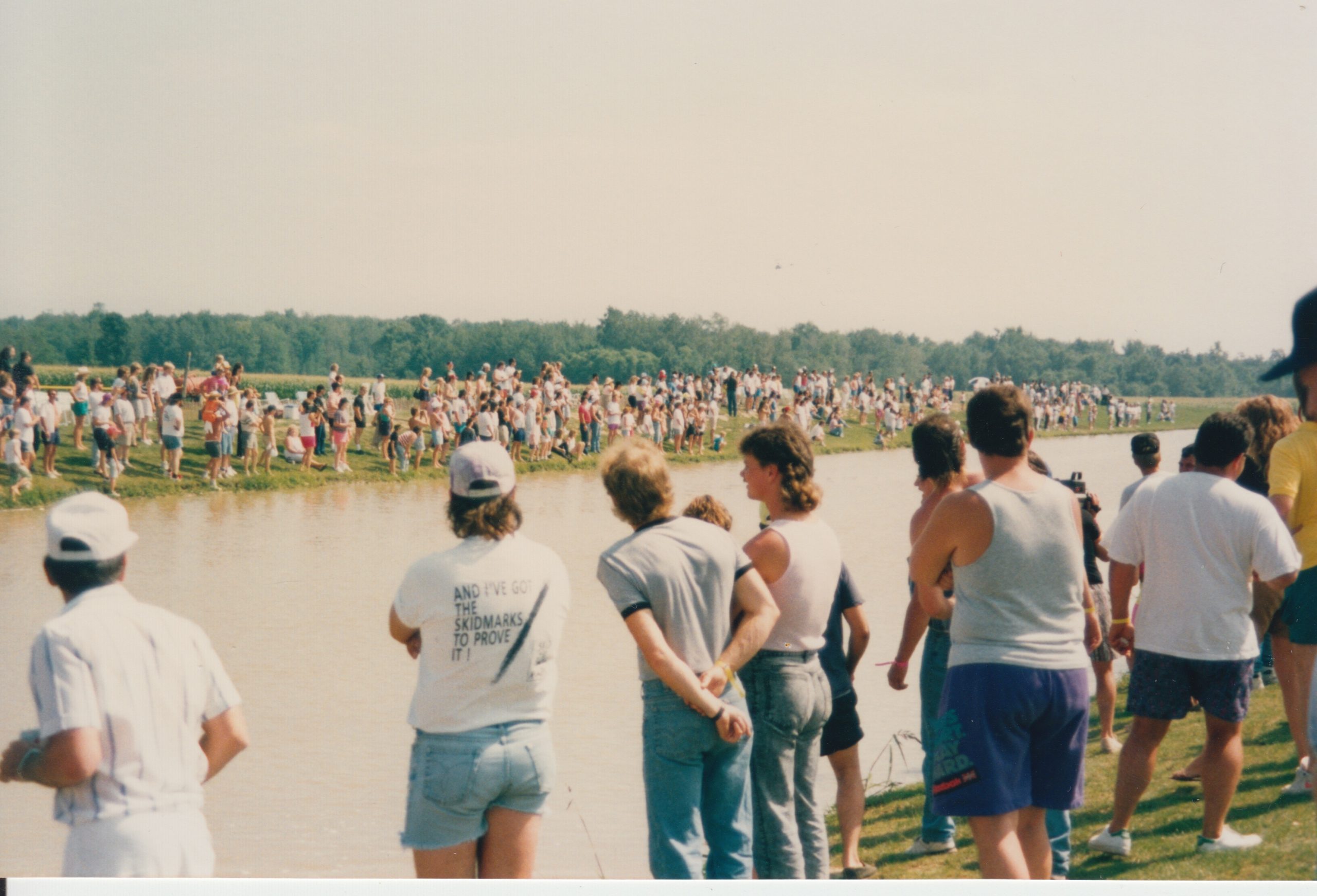 Construction of the newly named 2000 feet long by 100 foot wide lake on his property was costly. To justify this expense, Henry stood behind the requirements in order to be a dealer for Bombardier’s newly introduced vehicle, Sea-Doo . At the time, Bombardier was only issuing Sea-Doo dealerships to Ski-Doo dealers who had water access, such as a lake. Before construction of Lake Bieda, Henry clarified with Bombardier that this new construction would properly classify his dealership as having water access and they agreed. Construction of the lake began and Henry was now a Sea-Doo dealer. However, those closest to him knew that the lake was important for testing in order to silence his critics, make unbelievers believers, and to show everyone that he could do the unthinkable.

Team G.L.F. found testing “Wally” to be more difficult than originally thought, and much more time consuming. Three months of suspension, clutching and engine development, not to mention the numerous drownings that “Wally” would endure. In order to really test the distance capabilities, the Team knew that they’d have to venture out to a larger body of water, and as luck would have it, a representative from the Welland Rose City Festival reached out. They heard of Henry’s plan to cross Lake Ontario and asked if he would be interested to put on a water skipping exhibition at the Festival. The seven mile exhibition run in the Welland Canal was the perfect test site.

With all of the excitement and hype of crossing Lake Ontario, others saw an opportunity to beat Henry to the punch. When the summer of 1988 arrived, Henry was busy promoting “Tame the Lake”. Others wanted to jump on the coattails of the crossing, and

Carl Speiring of Fast Company Racing, Andy Alexander and Joe Barrato of Fat Brothers Racing, started planning a Lake Ontario crossing as well. They called their attempt,  “Tame the Lake Before Bieda”. In the end, neither Team could figure out the proper set-up for such a stunt.

As the summer dragged on, with plenty of media hype, Team G.L.F. began monitoring the marine forecasts from dusk till dawn, looking for optimum wave conditions. Unfortunately, there was six cancellations over this period, and many locals and media types grew highly skeptical of the crossing, calling it a hoax. On August 20th in Port Dalhousie, Ontario, the Team realized that this was probably going to be the best wave conditions that they would get on the Great Lake, and quickly made preparations.

From Port Dalhousie it was a straight shot (34 miles) across the lake to Toronto, with near perfect visibility conditions. This is when things took a turn. Everyone was getting ready for the crossings but were taken aback at what happened next. At precisely 6:11pm, nobody could have guessed what was about to unfold. There was a person heckling Henry, like what you would find at a pro sporting event, and this didn’t sit well with the daredevil. Henry jumped on “Wally” and literally took off across the lake, headed to Toronto without any warning, even forgetting his life jacket in order to silence all his critics, and now the hecklers. Even the support boat wasn’t aware or completely ready for this and had to catch up to “Wally”. 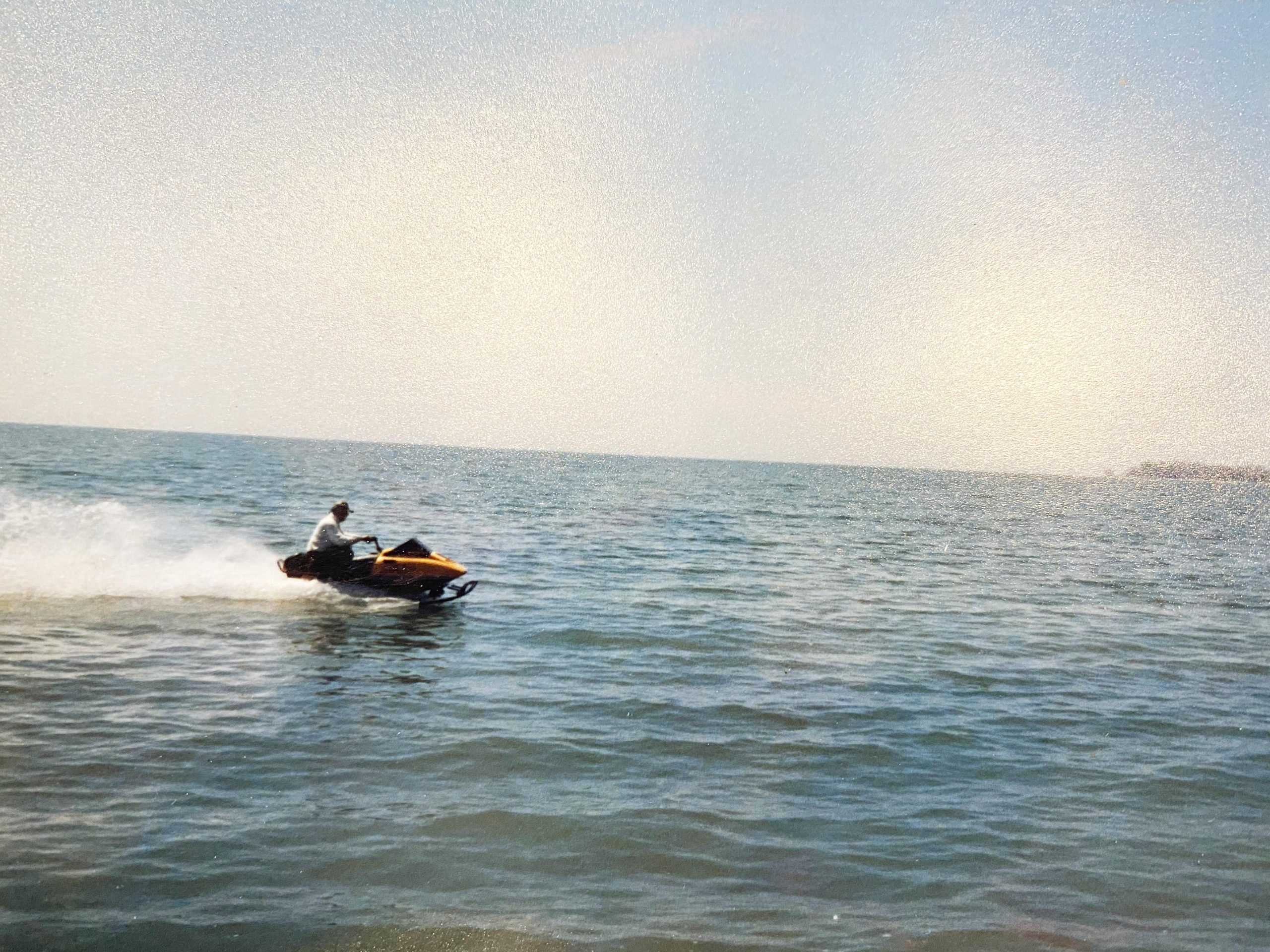 In the beginning, Henry had to hold on to the snowmobile as it crossed 9” chop on Lake Ontario before it settled down. While to many people, 9” chop may not seem like huge waves, but on a snowmobile, it is really significant. The further that Henry got from shore, the more the lake settled down and this is where he started to really squeeze the throttle. The 521cc Rotax was hitting speeds over 60 MPH and started to pull distance on the support boat which was a twin engine 32’ off-shore.

Thirty miles behind them and the shoreline in sight, the mission of crossing Lake Ontario was in grasp. With only two miles between the snowmobile and shore, one can only imagine that Henry Bieda was making a list in his mind of which one of the “nay-sayers” he should call first to silence when a boat crossed his path not too far away, sending a two-foot wave towards “Wally”. The heavily modified Ski-Doo Formula SS almost instantly shot straight up like a rocket being sent to the moon. The thought this being the end of the stunt, just a couple miles from shore, and then be taken out by a boat’s wave was unfathomable. As it turns out, there was just enough available throttle left in the 521cc Rotax to bring “Wally” out of, and back on top of the water one more time.

Henry made land at Hanlan’s Point in Toronto, travelling from Lakeside Park in Port Dalhousie in forty-two minutes. When he safely brought the sled out of the water and stepped off after the crazy ride, there was no welcoming committee, no cameras, no media. This was due to the disbelief that anyone could cross Lake Ontario on a snowmobile. The only people that even approached Henry were a few bewildered drunk people that were more or less unimpressed by the feat. Team G.L.F. had a brief celebration, refuelled and mounted “Wally” to the boat, and returned to Port Dalhousie. With limited technology and no social media, everyone would have to wait to see the group return, to find out that what many believed to be impossible, was in fact possible. 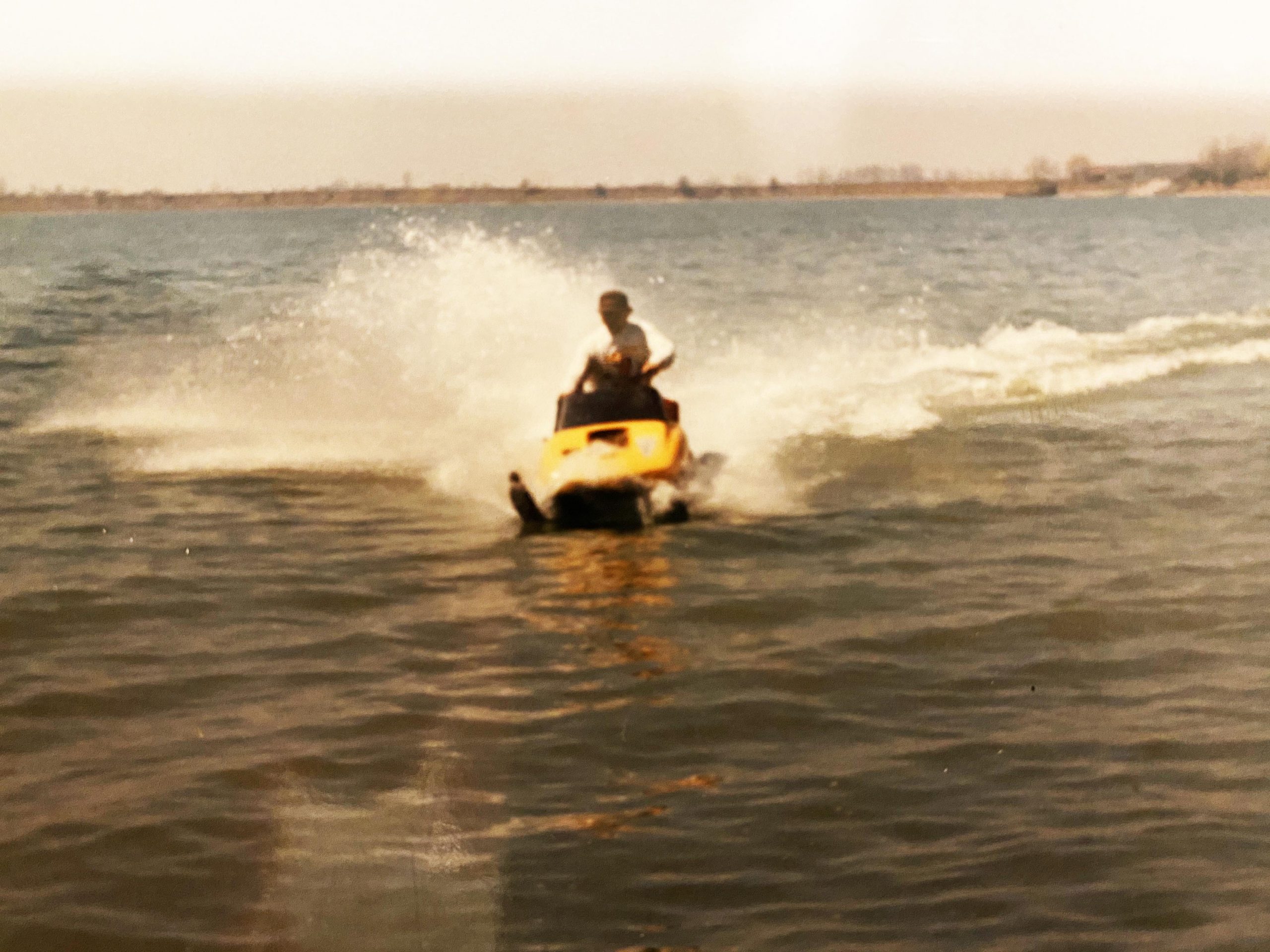 Henry Bieda considered his “lake stunt” to be his greatest accomplishment ever on a snowmobile, and one that would never be duplicated…Thirty-three years later it has never been attempted again.

Watch for Part Two in the next issue of OSM, where Henry Bieda sets a World Record.