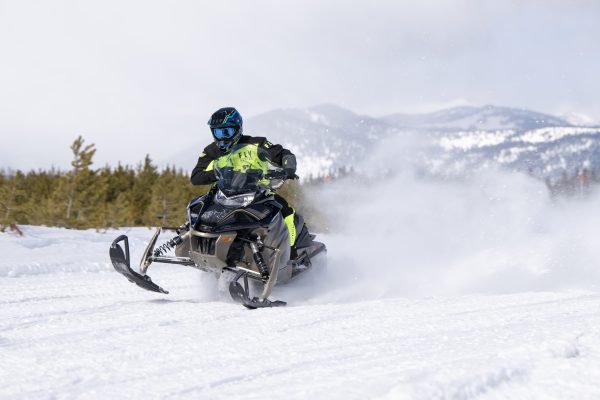 By now, you have likely read up on the 2023 Yamaha lineup released in late March. Yamaha was the last of the big 4 OEMs to preview their new sleds. Many (including us) had hoped for a groundbreaking release displaying possibly a new Japanese built chassis loaded with futuristic new features and tweaks to squeeze out even more power out of a class leading 4-stroke motor. Unfortunately, we did not get everything we asked for from Santa Yamaha.

That said, Yamaha still has all their existing four motor choices and continue the chassis partnership with Textron as they have been doing for quite a few years now. These days buyers expect dramatic changes to chassis, motors, graphics and so on seemingly every year, but that’s not always reasonable nor the best business approach. Yamaha’s business model has been basically to offer a simpler lineup of sleds, but with industry leading reliability and longevity.

If you ask any Yamaha die-hard why they purchased their new sled, they will all likely offer you the same response “Because they just don’t break” and that still holds very true today. Yamaha owners often have more time to actually ride and enjoy themselves because on a mile-per-mile basis they are spending less time wrenching. Also, by keeping a simpler product line in respect to everything from the chassis to motors, every part put on these sleds has been rigorously tested by the Yamaha engineers to ensure quality. So, while you might not get any industry changing technology this year, you will also not become an OEM Guinea Pig of beta testing during the season… after spending $20k on a new machine. With Yamaha you can count on basically zero issues during the riding season.

Yamaha (like anyone else in the last year) was not totally immune from supply chain issues that hampered timely delivery of all the pre-order sleds across the entire industry last year. However, by running without a ton of major changes in 2023 they hope to deliver as promised and maybe even early, as noted in their pre-order process by the fall of ’22! 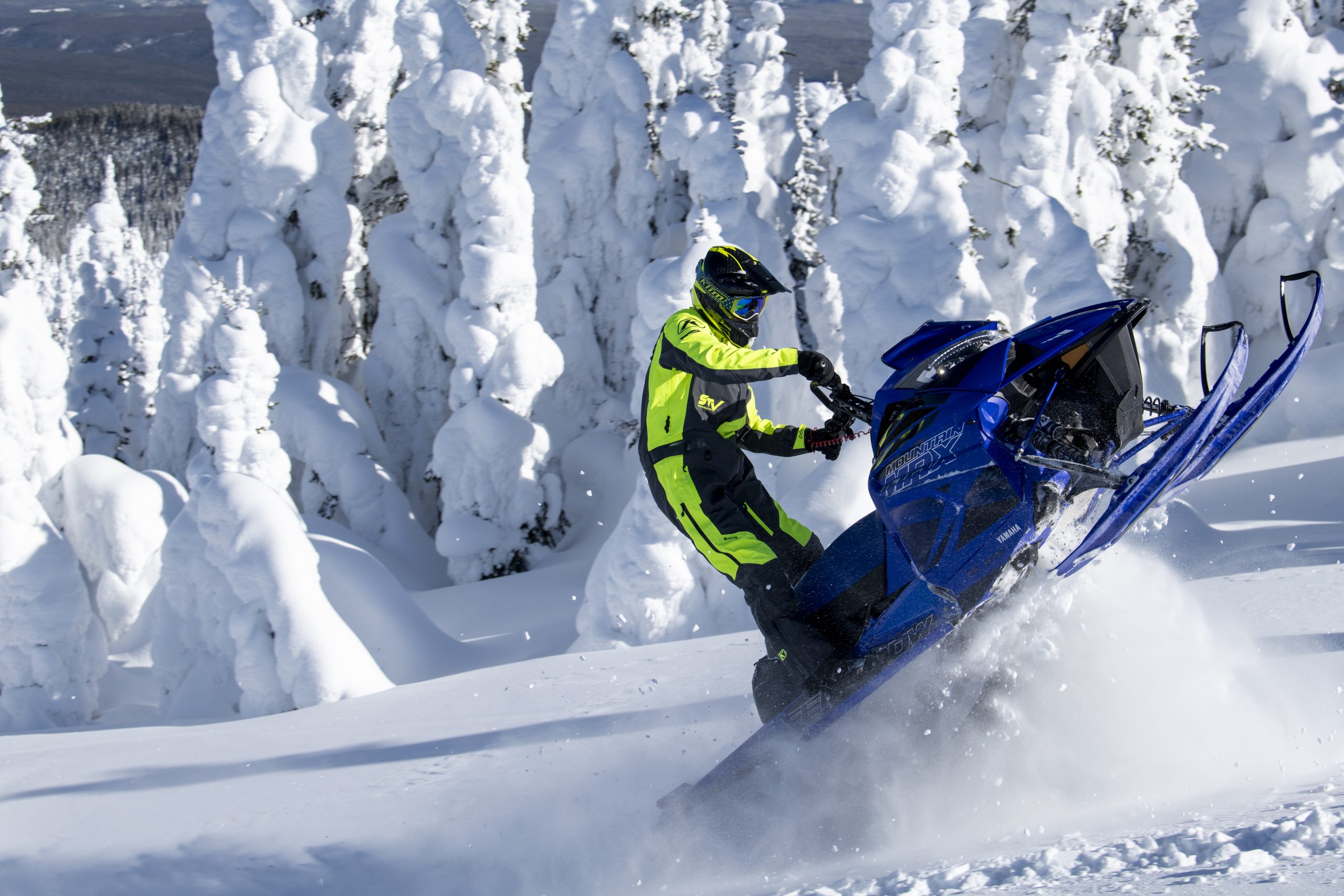 On With the New

The flagship lake racing Sidewinder SRX returns, and die-hard Yamaha owners will rejoice in it donning the classic Yamaha Blue color scheme. It’s not quite the classic royal blue offered in 2021 but a slightly bolder color of blue with a glossy tint to it. Across the chassis there are matching highlights from the slide rails, tunnel, and skis, so it’s certainly a lot of blue but the pictures certainly don’t do it any justice, it really pops on the snow and is a great looker. Last year’s throwback red, white and gold was one that riders either loved or hated. While I personally really liked bringing back the 1977 SRX to the modern age, I think many like STV’s Host Jeff Steenbakkers will be happy to see SRX blue again. Oh, and I can’t forget to mention that this sled is now equipped standard with electronic power assisted steering…yes! This isn’t new to the Yamaha lineup as they had it on select GT touring models with it in 2022 but we were certainly left scratching our heads why the SRX didn’t get this before. None-the-less, it’s here now for your enjoyment. With this addition, the SRX is certainly in contention for the best trail sled of 2023. Without EPS it was still a great sled, but this is just something that completes the entire package. Plus, if you add some 9-inch carbides and a pile full of studs there won’t be many that will keep up on the trails.

Adding to the EPS lineup, the new Sidewinder L-TX LE is fully equipped with power steering. This is another great choice for an aggressive trail machine from Yamaha. In model year 2022 only the GT touring models offered power steering options.

Snow Check/pre-ordering will be very limited this year both in quantities available and the timeframe and we believe  is certainly due to the supply chain issues. By the time you read this your options will be very limited. But if you did get your chance to order one of these new 2023’s you will be happy to find that Yamaha has offered a three-year warranty on all 4-stroke models (besides the Snoscoot). Unfortunately not on any of the 2-stroke sleds (like Mountain Max or Venom) will have the three-year warranty. 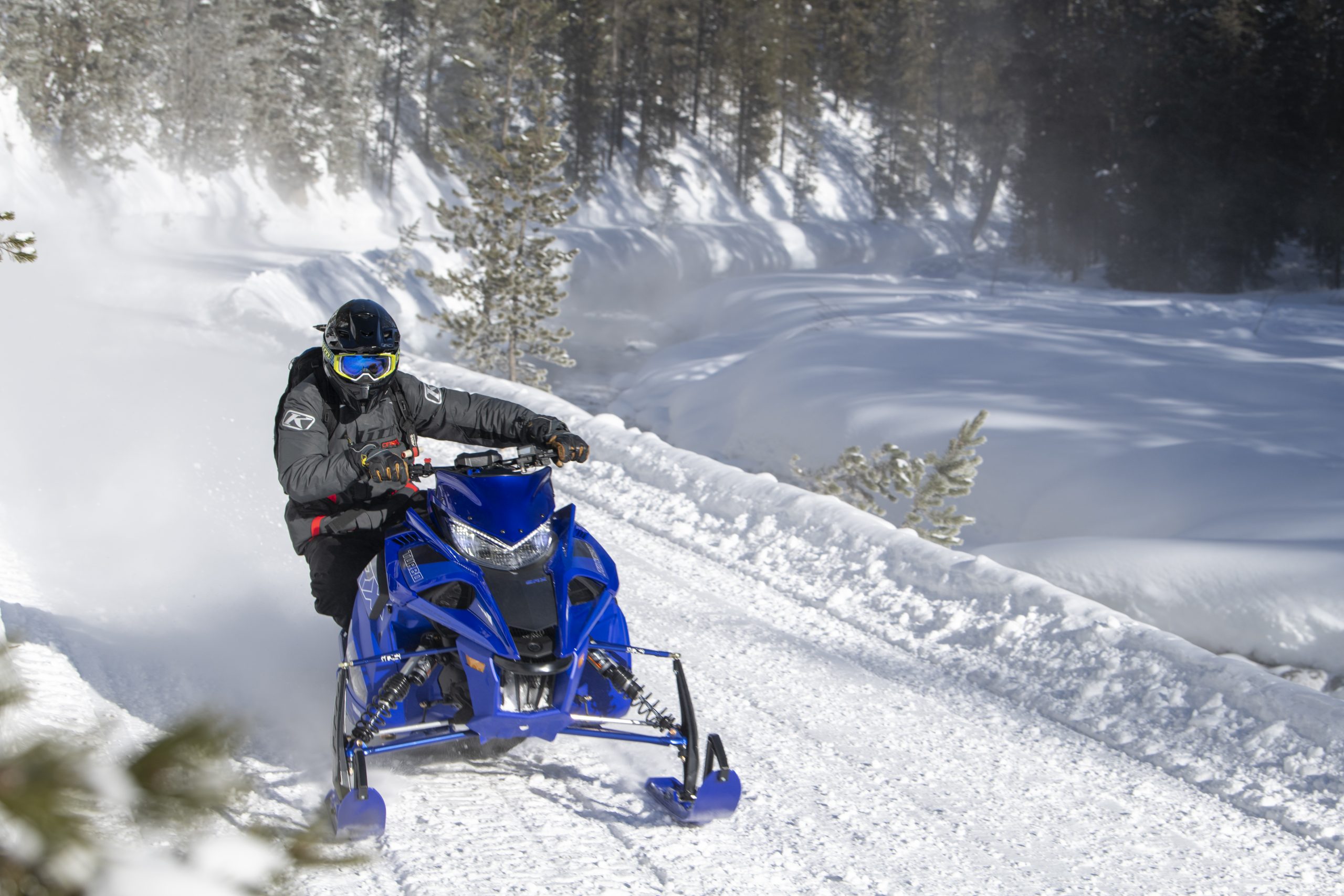 We love simple choices and Yamaha has made it a bit easier to select your machine this year. Their lineup consists of basically two models, the SRX and L-TX lines with multiple sub-models. All trail models across the board will sit on the 137” chassis with no other options for a shorter length, except for the smaller ¾ sized Venom 121” on its mid-sized chassis. The L-TX lineup will all have a 42-inch ski stance with Stryke single keel skis, the 15”x 1.25” Ripsaw II track, and a choice of two shock packages. Those shocks are either the Monotube Alum-HP on the L-TX SE or Fox QS3 on the remainder of the L-TX lineup. Motor choices are simple as well, all with come with the big power delivery of the 200+ HP 998cc turbo 4-stroke EFI motor! Well, that is except for the Viper L-TX which is now the only naturally-aspirated 4-stroke in the adult lineup. The Viper has proven in the past two years to be a surprisingly good selling machine, especially to the ‘new rider’ segment. At right around 130hp there is plenty of ponies for anyone, let alone a newbie. But the novice riders like the warranty, reliability, ease of maintenance and everything else you get with a Yamaha 4-stroke sled.

For the crossover riders, two choices return this season within the X-TX platform. Even though these two sleds share the same name they really are dramatically different for tailored riding styles. For a true crossover lover, the X-TX SE is your choice with a narrower 40-inch ski stance and a deep snow capable 15”x146”x2” Camso Challenger track. Up front you get the Yamaha Mountain ski which has become one of our favorites for its predictable on-trail behavior and highly commendable off-trail flotation capabilities. This sled can really fit the needs of riders that commonly traverse across different elevations with its consistent horsepower delivery and no clutching adjustment needed

The more trail-oriented X-TX LE happens to be our second favorite “trail” sled in the 2023 lineup (only to the SRX). Sure, its plenty capable of getting you where you need to go off trail with the longer track length, the standard Fox IQS shock package (that is only available on this LE and the SRX) and its standard deeper lug 1.6 Cobra track. It’s really a perfectly balanced trail machine too and surely to be a very popular sled for really anyone, on-trail and off-trail. 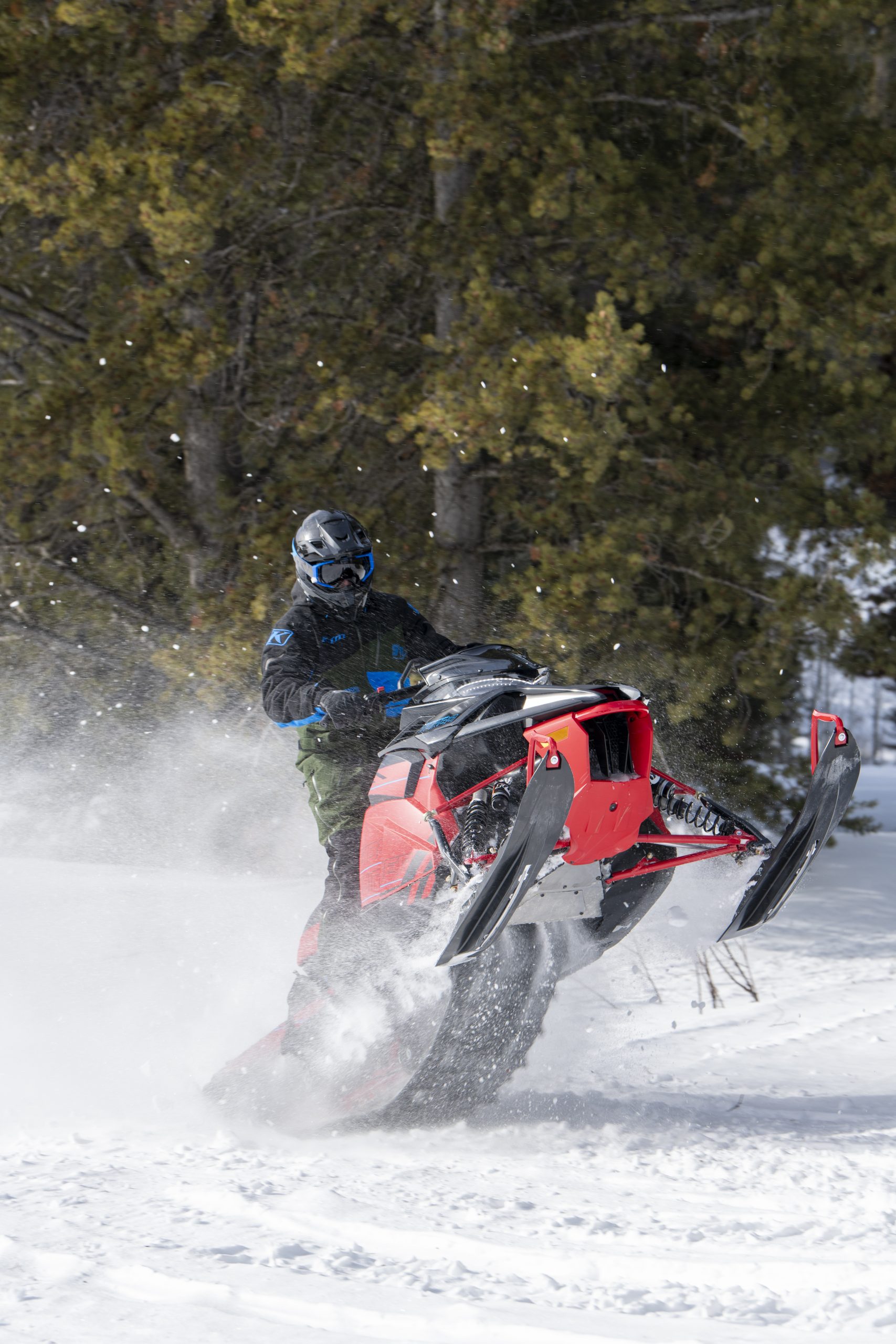 Yamaha brings back the 2-stroke lineup again that launched to much rejoicing in 2021. Picking your choice again here is simple and you better love the colour blue, the entire mountain lineup becomes coordinated in only team Yamaha Blue for the upcoming season.

The Mountain Max is available in three different platforms differing just slightly between each other. All models will share the single beam rear suspension (shared with Arctic Cat and known as the Alpha One in that brands labeling system). These sleds lead the pack with sidehill maneuverability, a 36” ski stance, Fox QS3 shock package and two different track lengths. The LE 165 is equipped only with the 15”x 3” Power Claw track. The LE 154 standard will be only in the 15”x 2.6” Power Claw and the LE 154 SL (Super Lite) gets the 15”x 3” track less the electric start and battery for those that are looking for a lighter weight package to offset those few extra pounds they put on over the holidays.

Last but not least, the SX Venom Mountain returns for the youth and beginner deep snow riders in 2023. It shares the same the single pivot – single beam rear skid as the Mountain Max but with a 15”x146”x2” track and a slightly wider yet still narrow 38” ski stance. And of course, the 400cc single cylinder powerplant. 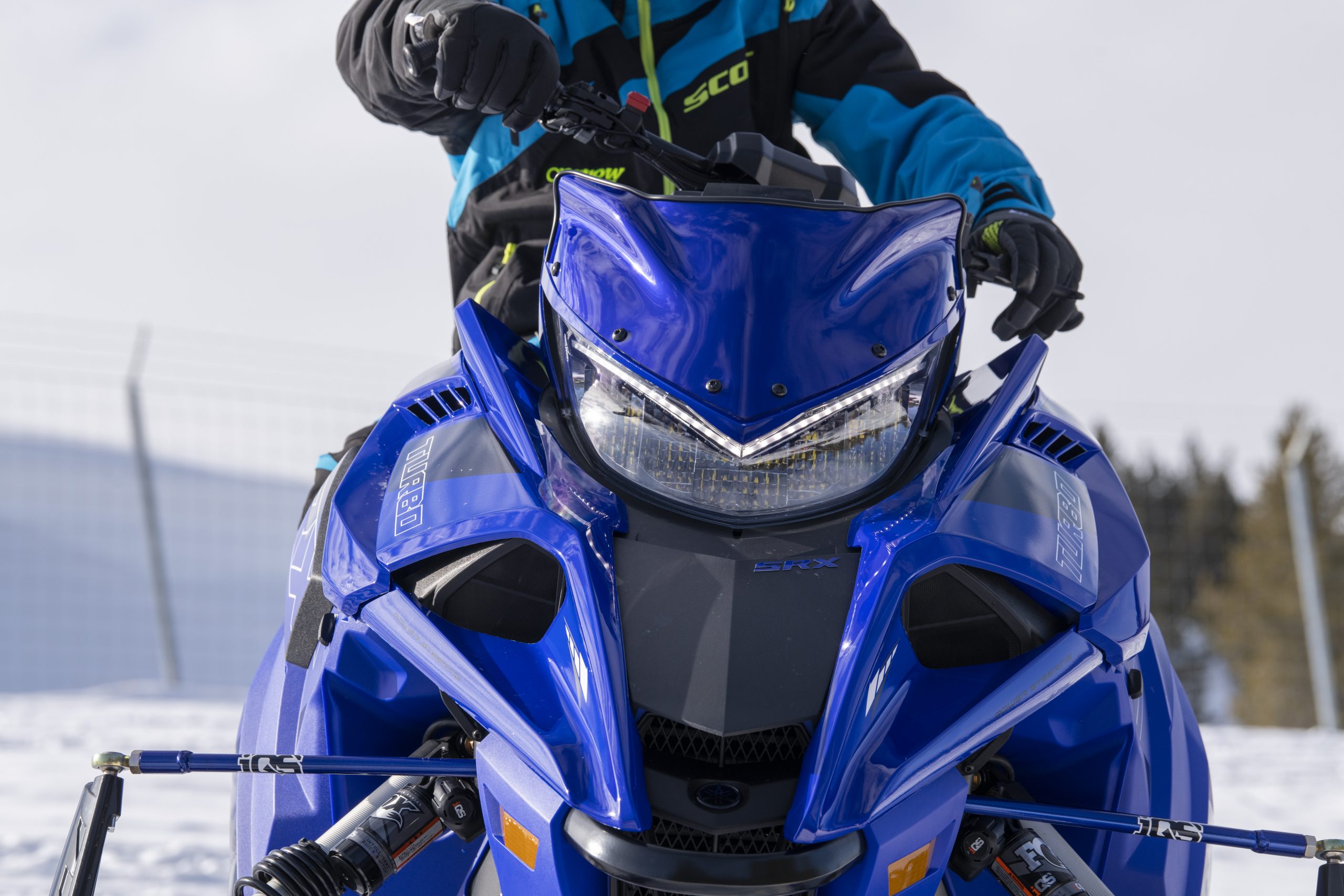 The big news for trail riders is the expansion of Yamaha’s Electronic Power Steering system, available on four select Yamaha models for 2023. The all-new in 2022 system is a design claimed to be based on ATV technology – but with tweaks specifically for your favorite Yamaha snow machine. It works by utilizing a magnetic torque sensor to measure steering input based on torsion of the steering post from both the handlebar response and ski resistance.  It also incorporates the engine RPM and vehicle speed into the control module to adjust for its variable assistance, which gives you more power at slow speeds and tapers down to completely free steering at high speeds. This delivers truly consistent turning ability, no matter how fast or slow you are moving.

This isn’t a new concept by Yamaha as they have had in years past starting on the 2011 Vector and Apex models, but it is a completely new design that claims to have shed three pounds off from the previous generation of EPS. Even with the reduction in weight of this new generation it still adds a few pounds to the sled but when equipped, makes it feel like you are on the lightest machine around. It’s truly unbelievable how well it works when paired with a turbo 4-stroke.

Out with the old….Utility and youth

2023 brings a big change as Yamaha will phase out all of the Japanese built utility and two up models. Gone are the VK540 twin, the VK Professional II and the RS Venture TF, which all were in older chassis. 2-Stroke utility options come with a choice of motors starting with the 400cc single cylinder Transporter Lite that is offered in a single rider or two up version on a platform that is essentially a longer track SX Venom. If you need more power pick the Transporter 800, which descends from the Mountain Max with the 800cc twin but with a wider ski stance and slightly smaller 15”x153”x2.25” track.

With the elimination of the VK Pro and RS Venture the only 4-stroke utility-ish model is the Sidewinder S-TX, which is really more of 2-up touring not the wide track workhorses that were offered by Yamaha in the past. We will tell you though that the S-TX GT is an amazing swiss-army knife of a sled with power steering, additional storage/fuel capacity, and tons of warming from dual hand warmers, seats, and a big windshield. Plus you can go Mach 3 and scare the hell out of your significant other in the 2-up seat behind you… I’d pay lots for that opportunity!

For the younger generation, Yamaha’s lineup and plan to help beginner riders transition to a full size sled is perfectly laid out so those parents can purchase something for the perfect fit for any age or size. For those real little guys and girls, the SRX 120R is back in Team Yamaha blue. The older kids get the Snoscoot 200 ES that gives you two choices of colours with the Yamaha Blue or the more eye catching Mint-Red-Black (new for 2023). The Venom 400 will the bridge gap between youth and full size adult sleds.

What is the 5-year plan?

We are hoping Yamaha continues to sell a pile of snowmobiles! But we also hope to see some more unique innovation. We feel like with the proliferation in sales in the outdoor recreation markets, and snowmobiling in particular, Yamaha is ripe to jump back into the chassis and motor game with two feet. For now, your guesses are as good as ours, but either way it aint gonna happen until at least 2024. Keep those fingers crossed blue-shirt guys!