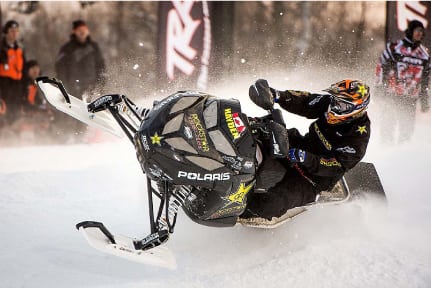 Duluth MI, Dec 4, 2013 – Rockstar Energy Polaris Racing’s Iain Hayden held his own against the top snowmobile racers in the USA at the ISOC season opener in Duluth, MN this past weekend.   The Chatsworth, ON native scored eighth overall in the Pro Open division at the double-header Spirit Mountain event, which attracted over 17,000 spectators.   Perfect snow conditions on both days ensured for exciting racing and hard fought for battles as dozens of drivers showed up hoping to qualify for the finals.  On Saturday Hayden enjoyed a stellar day that saw him nail down 2-4 results in his qualifying heats, netting him a front row start in the final.   Thanks to a lightening fast start on his Polaris 600 IQ, the six-time Canadian National Champion stayed in the up-front mix to finish a solid fifth at the checkered flag, which would be the top finish for a Canadian in the Pro Open for the weekend.

On Sunday, Hayden dealt with a few operating issues in the heats that saw him finish 4-5. This meant he had to line up for the LCQ, which he finished in fourth. In the final, Hayden got bogged down in ninth place, only to slip back into 11th place by the time the checkered flag was waved.  “We had a good run this weekend on the IQ and finished more or less where we had anticipated. Sunday could have been better but we still finished well up in the points,” Hayden said.  The team’s developmental driver, Jacob Rosko-Fong struggled on the first day in the Sport Class and failed to get through the qualifiers, which had 78 drivers vying for one of 15 starting positions in the final.   On day two Rosko-Fong redeemed himself with an impressive win in his first qualifier and third in the second. In the final, after a front row start, he ran with the front-runners for a good deal of the race only to suffer a minor crash that saw him drop back into 12th place at the checkered flag.  “Day one was a disappointment but day two kind of made up for it. Unfortunately I had a bit of a hic-up in the final on day two but the good news is that my IQ ran great and I felt good on the machine. The speed was there, that’s for sure,” Rosko-Fong said.  Team Rockstar Energy Polaris Racing heads to Round 2 of the ISOC Championships in Bessemer, Michigan this weekend and then returns to Canada for Round 1 of the CSRA Nationals, which kick of December 13-15 in Sault Ste. Marie, Ontario.