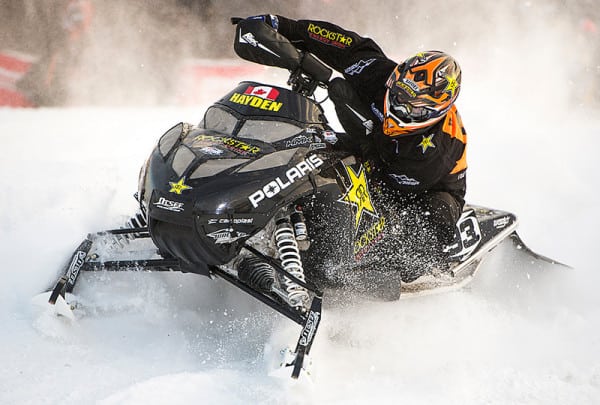 Hayden basically came, saw, and conquered Northern Michigan, winning every race he entered and deftly putting Canada at the top of the scoreboard in the combined MXR/CSRA event.

On Saturday afternoon the multi-time Canadian champ entered both the Pro Open and Pro Stock divisions, winning the four qualifying heats as well as the two finals. Although his American and fellow Canadian rivals pulled out all the stops to keep him honest, they were clearly no match for Hayden and his Polaris IQ.

At night, under the lights, Hayden put the icing on the cake by winning a special shootout that featured the top 16 riders of the day.

In Sunday’s action, Hayden lined up for the Pro Open only, again annihilating the competition in the two qualifying heats and the final.

“It’s not very often that we can go racing on a pretty good track where there is nothing on the line and we can try things you normally wouldn’t at a points race,” Hayden said. “We took advantage of the weekend to get some testing done for the upcoming races at Rouyn-Noranda and the Winter X Games. We got everything dialled in and in the process managed to win some races. It was a very fun and productive weekend.”

Hayden’s teammate Jacob Rosko-Fong contested the combined Pro Stock/Pro Lite class scoring consistent top three finishes in his qualifiers on both days to then garner 5-5 and 6-7 results in the finals on Saturday and Sunday respectively.

“It was a stress-free two days of racing and testing with results that I more or less expected. The qualifiers went really well. The finals were a bit tougher for me, racing against the league’s heavy hitters but all in all I was happy with my results and the performance of my IQ,” Rosko-Fong noted.

After a break for the holiday season, the Rockstar Energy CSRA Snowcross Series resumes on January 18-19 in Rouyn-Noranda, QC.