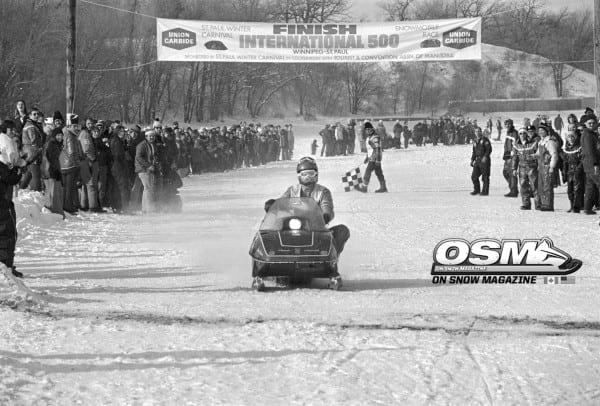 While the snowmobile racing community has been buzzing over the eminent return of the International 500 cross-country race, the folks at the United States X-Country  (USXC), organizers of the event, have been relatively quiet on the topic as they ironed out final details. However late last night we got official word from the sanctioning body that the legendary I-500 race is indeed back! The crew at OSM has talked to countless racers, both young and old, who are more than a little excited about the return of what many deem to be one of the most significant races in snowmobile racing history. While we are sure there will be much more to talk about in the weeks leading up to the international race, here is the official word form USXC on the latest happenings of the legendary I-500:

The USXC (United States X-Country) Racing Association is pleased to announce the rebirth of a legend, the reinstating of the classic International 500 Snowmobile Race. This newly revised event will be called the Seven Clans Winnipeg to Willmar International 500, with race dates being February 11th through 14th.

Snowmobile and winter enthusiasts alike remember this important snowmobile race as the event that kicked off the St. Paul Winter Carnival from 1966 to 1982. The grueling race had many unique features about it, including spanning two countries, unpredictable weather, and some of the toughest terrain imaginable over its 500-mile course.  Just being able to say you competed in this race was something to brag about, as this event was extremely hard on man and machine.  Many of the drivers who claimed victory of this tough race, have stated that winning the I-500 was one of the greatest achievements of their racing careers.

The original International-500 Snowmobile Race has changed over the years, including running from Thunder Bay, Ontario to White Bear Lake, MN, and several years of the course running between locations in Minnesota.  Since its termination, everyone has wished that the original Winnipeg to US I-500 would come back because of its rich history.  With the announcement from the USXC this fall that the Seven Clans Winnipeg to Willmar I-500 snowmobile race will be starting in its original location of Winnipeg, Canada, the excitement is growing about this event.  The 2015 Seven Clans I-500 will start in Winnipeg, Canada and end in Willmar, Minnesota.  The racers will be following a specifically marked route with overnight stops in Thief River Falls, Bemidji and Alexandria, Minnesota. The 2015 Seven Clans Winnipeg to Willmar I-500 will cover many types of terrain including miles of rough wind-blown road ditch, snowmobile trails, woods, winding rivers and high-speed lakes. The USXC officials will try to keep as much of the 2015 race as true to the original route as they can, but the ability to end in the original city of St. Paul will be impossible because of the growth of the area.  With the route ending in Willmar, the Seven Clans I-500 will keep the same feel as the original race course. There will be over 300 competitors in this years race, from almost every state of the northern United States, Canada and multiple other countries competing not only against each other but the grueling terrain.  One of the greatest challenges for the USXC was getting all the racers and crews across the International Border quickly and efficiently.  However, because of close work between the USXC, Canadian and US officials, this challenge has been overcome.  The border-crossing plan they developed, if followed by the racers and crew members, will make for a smooth transition between the two countries for this and future I-500 races.

The founder of the USXC race association, Brian Nelson, is a two-time winner of the I-500 with wins in 1976 and 1978. Brian started the USXC because of his passion for Snowmobiling and Racing and wanted to bring his passion and skills to the snowmobiling community so others could experience the joy of the sport. When asked why it was important to Brian to bring back the I-500 race he said, “This race is important because it is the true test of man and machine. You can be a great driver but if you have one thing wrong with your machine or you don’t have the endurance to keep pushing, you will not be able to complete this race.”  He added, “All four snowmobile manufacturers will be involved in the race and will stand an equal chance of excelling because of the rules set forth by USXC racing and the ISR (International Snowmobile Racing).  The terrain and winter conditions these competitors will be racing through will create many challenges for them to overcome.  But at the end of this competition, anyone who enters the race will have such a sense of pride in their accomplishment and will have created memories that will last a lifetime.”