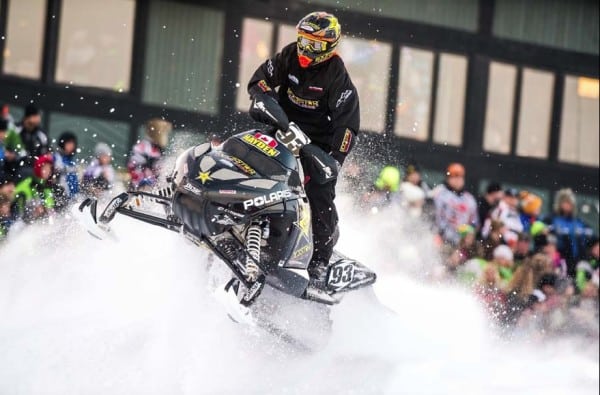 Team Rockstar Energy Polaris Racing ventured south of the border towards the end of November, first to Aurora, Minnesota, for a week of testing the new Polaris 600 IQ
racing sleds, then to Spirit Mountain Resort outside of Duluth for the ISOC series opener, November 28-30.

“The trek to Minnesota is an annual ritual for us to kind of dust off the cobwebs and get into the groove for another season of CSRA racing, which starts the middle of
December,” team owner Andre Laurin said. “The testing went well and both Iain and Dylan showed good form at the ISOC event. For us this race is a good indicator where
we’re at technically, physically, and mentally. We’re ready for Canada.” Round 1 of the ISOC Championship attracted the usual top American teams and drivers, ensuring full starting gates and top-notch competition. Just how tough the competition is was evident on the first day of racing, when multi-time Canadian champ Iain  Hayden missed qualifying for the Amsoil Pro Open Dominator final by just two one-thousands of a second.

Hayden’s teammate Dylan Hall – making his debut with the team – also missed the final. While last season’s top eight seeded drivers automatically advanced to the final, twenty drivers vied for one of the eight remaining starting berths and nobody was giving an inch.

On Saturday, day two of the event, Hayden booked average starts in his two Pro Open qualifiers, finishing fifth in both of them and coming up short for the final by one position. This meant another kick at the can in the LCQ, but a disastrous start saw him next to last out of the gate. He battled his way up to sixth, but again missed the qualifier by one position. Heading into Sunday’s qualifiers, Hayden vowed to make the final, but in his first two qualifiers he recorded a repeat of the previous day’s heat results, reaching the finish line in fifth. This time the LCQ proved to be the charm, however, with Hayden greeting the checkered flag in fourth.

Tucker Hibbert, who dominated on Saturday, again showed his mettle by taking the win. Despite his best efforts, Hayden had to settle for 13th, when all was said and done.
“When you keep missing the final by one slot it gets a bit frustrating. I know I had the speed but just couldn’t quite put it together until the LCQ on Sunday. So I was quite happy with that, even though I didn’t have much to say in the final,” Hayden said.

“But to qualify for at least one final at the opening ISOC round was an accomplishment for me and the team, because ultimately we were just testing the waters, or should I say snow, for the upcoming CSRA Championship, which is our main focus. As a racer you always want to do more, but in the big picture it was a good weekend. We know our sleds are race ready, I’m in good health, and I’m raring to go and kick of the Canadian series.”

Dylan Hall, meanwhile, faced similar scenarios as Hayden in Saturday’s qualifiers. He stayed consistent, going 6-6 in the heats and a chance for a start in the LCQ, which he finished in eighth place. On Sunday Hall’s day ended with the qualifiers, which saw him finish 8-8 in both races.

“For me, the weekend was a valuable learning experience, first time out with the team, and racing the top ISOC class. Although I didn’t quite get the results I was hoping for, my comfort level elevated throughout the weekend. I felt good on the IQ. It’s a really fast sled and I’m looking forward to unleashing it in the Canadian Championship,” Hall said.

The CSRA Canadian racing season commences on December 12-14 at Searchmont Resort in Sault Ste Marie, ON.