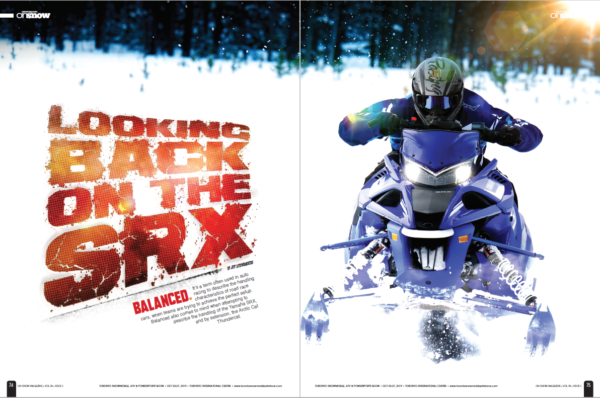 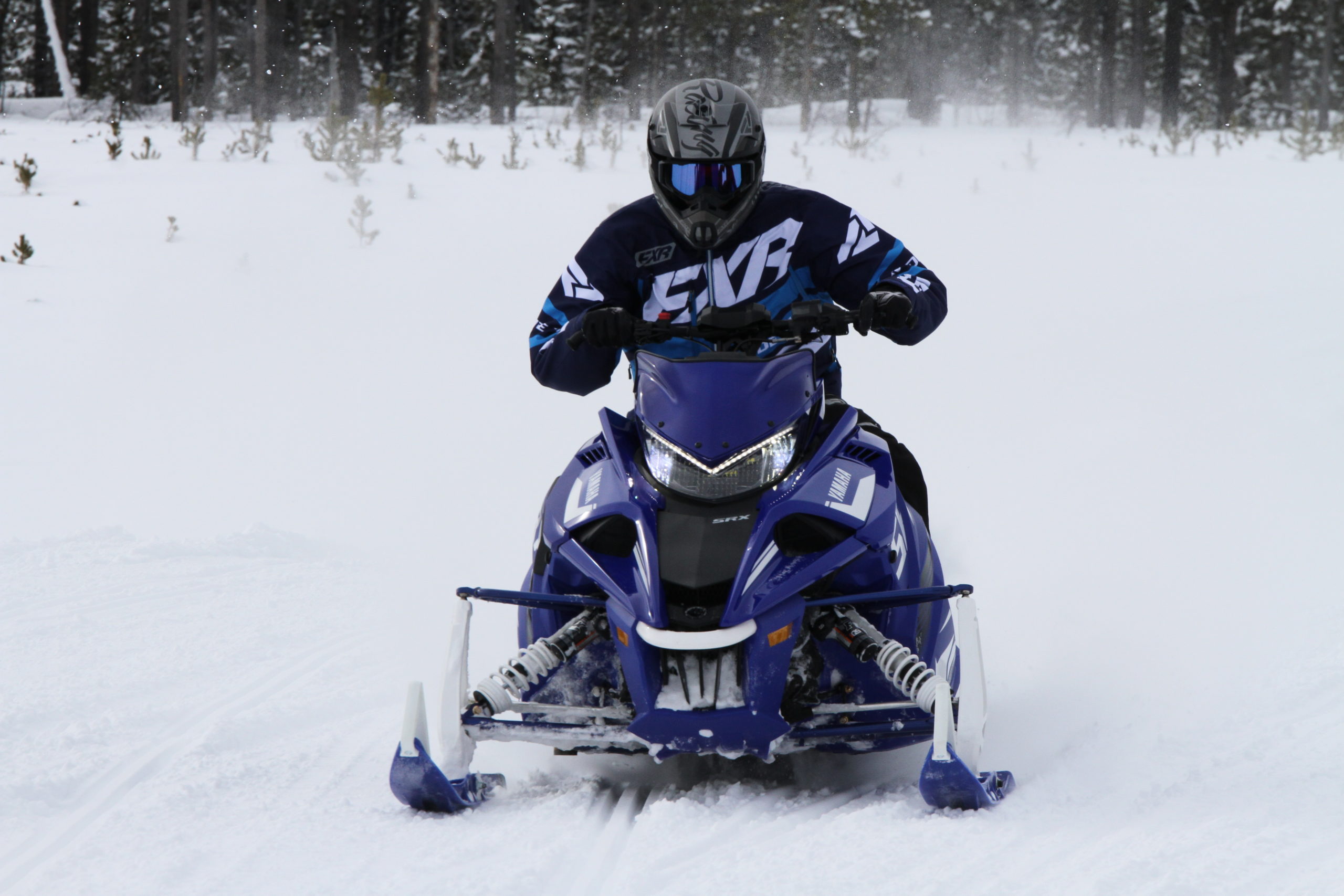 This story begins in the summertime. A passion of mine, perhaps even more so then snowmobiling, is road racing. Over the last decade I’ve had the privilege to crew and drive some spectacular cars; everything from Porsche GT3 Cup cars, to Trans Am TA2, to Chump Cars. I also like to fabricate and wrench on the cars myself. This has lead to a rudimentary understanding of car setups and tuning to achieve the maximum grip from the front and rear suspensions.

Working with some real pros over the years, one thing that I’ve learned is that a predictable, balanced car is a fast car. Achieving this balance is as much science as it is experience, and knowing what to do to correct an imbalance is perhaps the most important trait in a chassis tuner. 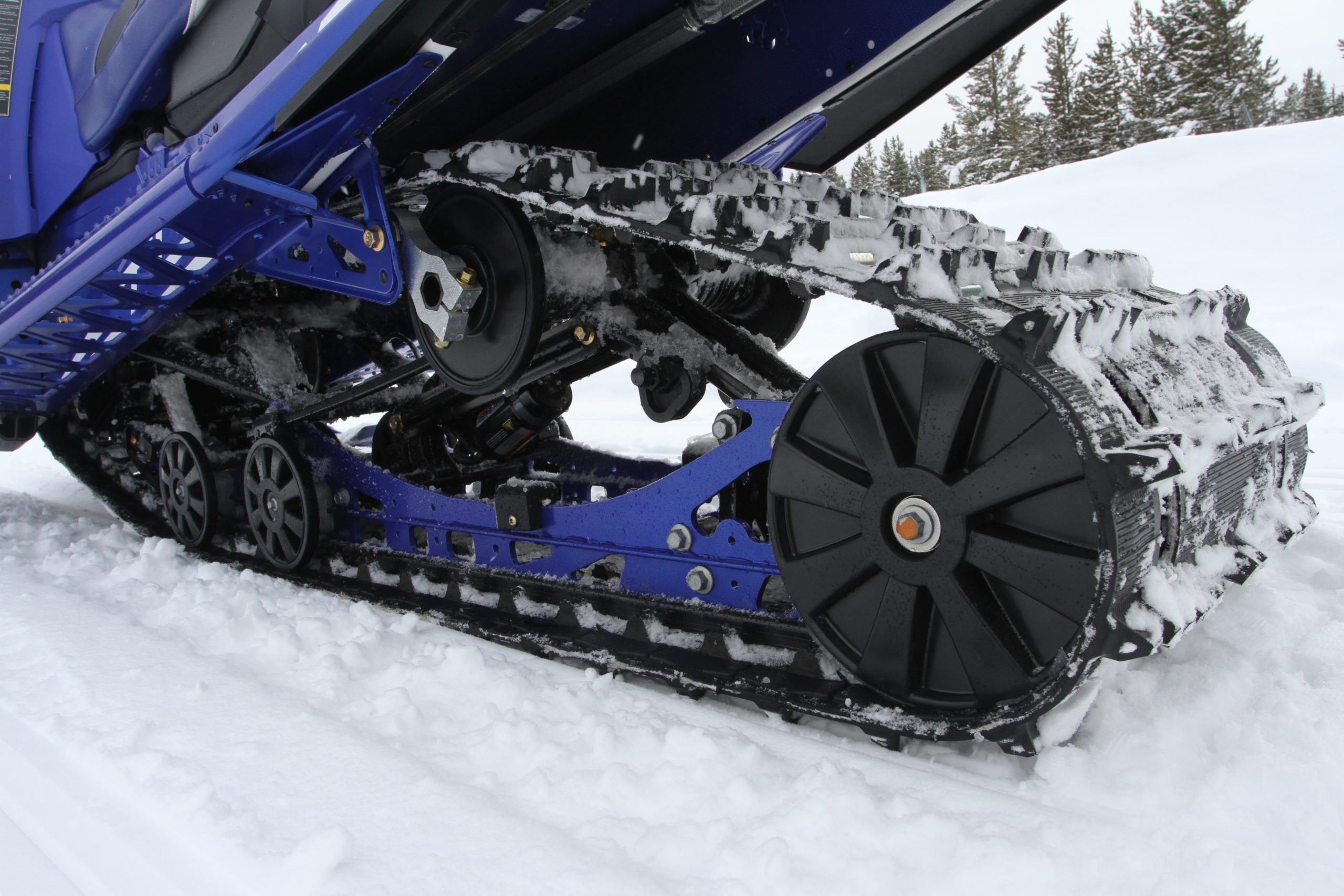 I don’t profess to be a guru in this department, but I do know a thing or two. For instance, if a car has a problem with grip on the front tires, such as understeer (or push) the solution may be found in the rear suspension by taking away rear grip, effectively rebalancing the grip between the front and rear of the car. To do this, there’s a good number of solutions, like stiffening up the rear sway bar, upping rear spring rates, changing tire sizes, or adjusting angles of suspension components.

Living in this asphalt world during the summer months has changed my outlook on wintertime snowmobiling. I often find myself trying to analyze what the snowmobile suspension is doing down there, and then make changes to tune my ride experience. But at times, I find I’m somewhat limited as to what I can do, especially with the track and skis, which as a rider, you are pretty much stuck with. I don’t know too many people who travel with different tracks for tuning purposes! 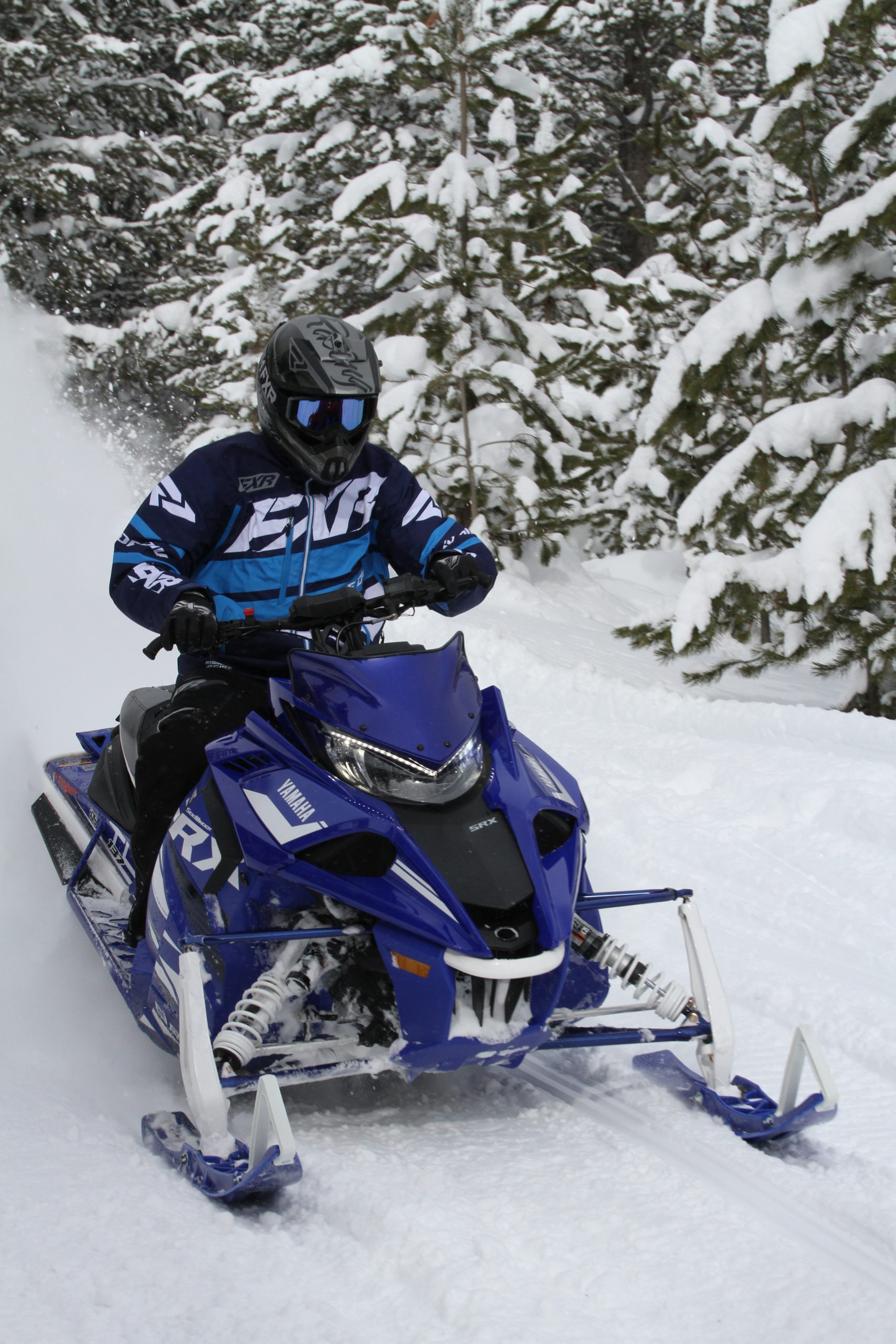 Enter the 2019 SRX and Thundercat. With one change in particular, these sleds have become two of the best balanced 4-stroke sleds ever produced by these manufacturers. And this change was a decreased rear grip.

When first introduced to the idea of a 1” track on a 200 horsepower snowmobile, I understood the reasoning, which was to decrease rotating mass to promote lake racer speeds. I got it, agreed with the concept and liked the idea. I felt it went well with the SRX and T-Cat names, and their lower stance would resonate well with the segment of the market that were looking for ultimate speed. However, I was sceptical of how this track would perform on trails.

The decrease in grip is felt right away, and for a hole shot, it does give up some acceleration. However, track speed does gain back some of the lost lug height, so acceleration is still pretty lively. The lighter track is also felt on the big end at speed, where it’s designed to perform. These machines are awesome fast, and seem to “pull” much longer then other sleds in this class. I should also mention that braking does suffer a little from the decrease in grip, so anytime you decide to leg-out one of these sleds, you should be really thinking ahead. 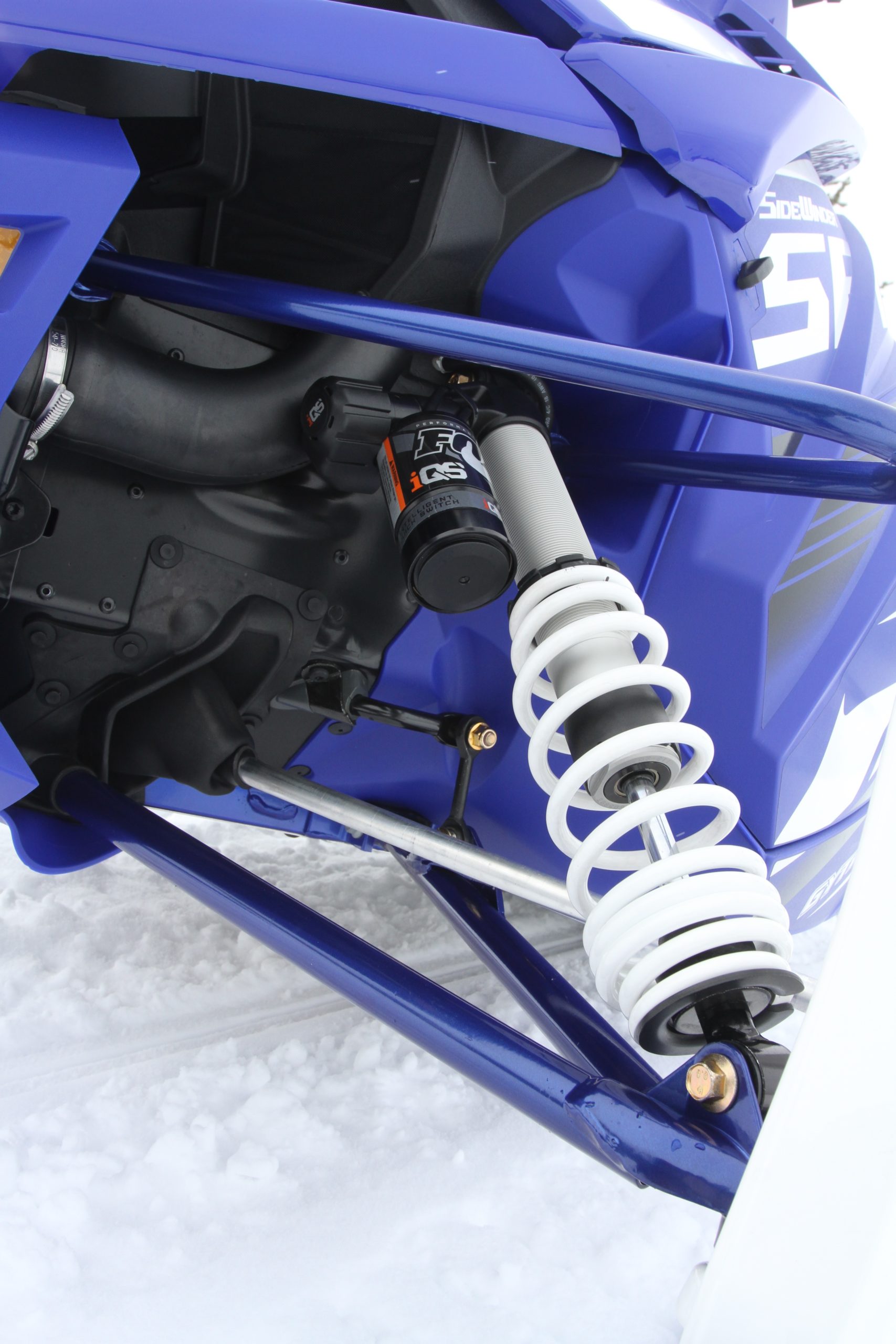 The SRX and T-Cat package surprised me in areas I didn’t really expect, which is pretty much everywhere, and right in the middle between drag race style starts and lake racer speeds. The new track seemed to balance the handling characteristics of these machines, and suddenly the rear suspension became a much bigger part of turning corners than it was before.

One of the gripes I always seemed to have with the Sidewinder chassis was the feeling that the sled was bound up a bit in the corners. It seemed to preform best when a rider could square off the turns. Fast in with hard braking, crank the turn, and get back to throttle was the 1-2-3 punch of cornering. I never felt the sled free itself up in the middle of the turn. It was as though the front would understeer until you could finally force oversteer, with horsepower just at the exit, and hope the sled was pointed in the right direction or wouldn’t hike an inside ski.

By decreasing rear grip, the sled now feels much freer in the turns. Braking distances are little longer now for sure, but the sled can now be trail braked much more effectively into the corners, which helps get the nose pointed where you want it to be, sooner. Also, the transition back to throttle can better balance out oversteer from mid-corner off. Here the sled is spinning the track pretty hard, but the smaller lugs tend to trench less, again keeping the rear of the sled much freer feeling. 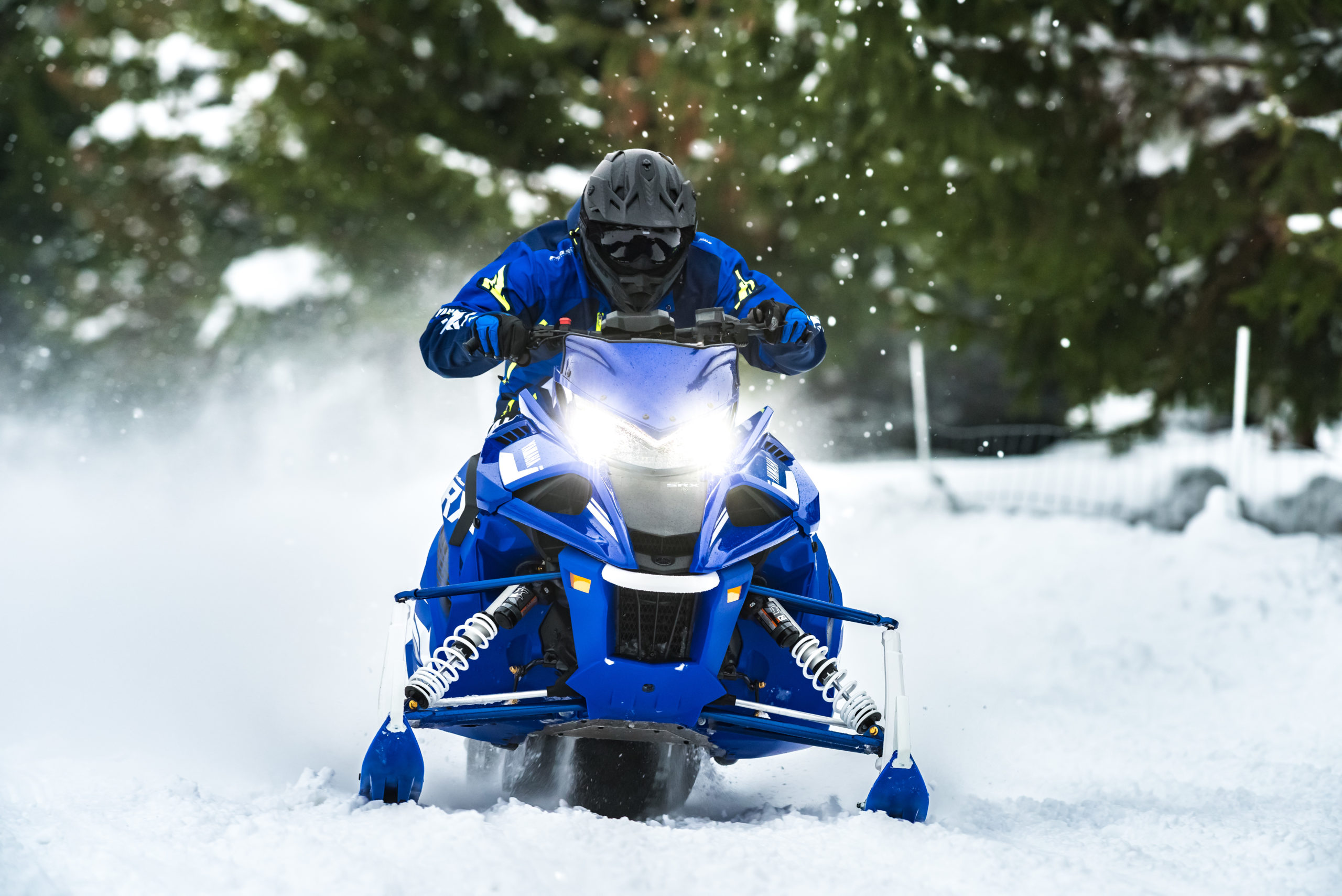 There is a small sacrifice to pay with absolute braking and acceleration, but I believe the increased speed in the middle of the corner nets a faster and easier overall speed. For me, the fun factor goes up with the much more engaged action of the rear suspension and use of the brakes in the corners. The sled now feels balanced.

Lowering the ride height also helped out the cornering abilities without much sacrifice to ride quality at all, and I absolutely fell in love with the electronically adjustable Fox iQS shocks. I can’t complement them enough for a stock shock package that is so easy to use for any rider. After almost 5000 kilometres of trail riding with 90% of that at full soft, where the most amount of mechanical grip seemed to be, they still had enough damping through medium and firm settings as the trails got rough. More sleds should have these!

I also feel that a performance 4-stroke is finally embracing what it is exceptionally good at. Let’s face it, a sled like this is never going to be an effective ditch banger, or feel nimble in trees on the side of a mountain. Trying to force a square peg into a round hole never works. I know I couldn’t point the skis of the SRX into deep powder and expect good things to happen, but I was okay with that, because in addition to the Yamaha embracing what the Sidewinder SRX was all about, I did too and my season on this snowmobile was my best season on the snow ever. 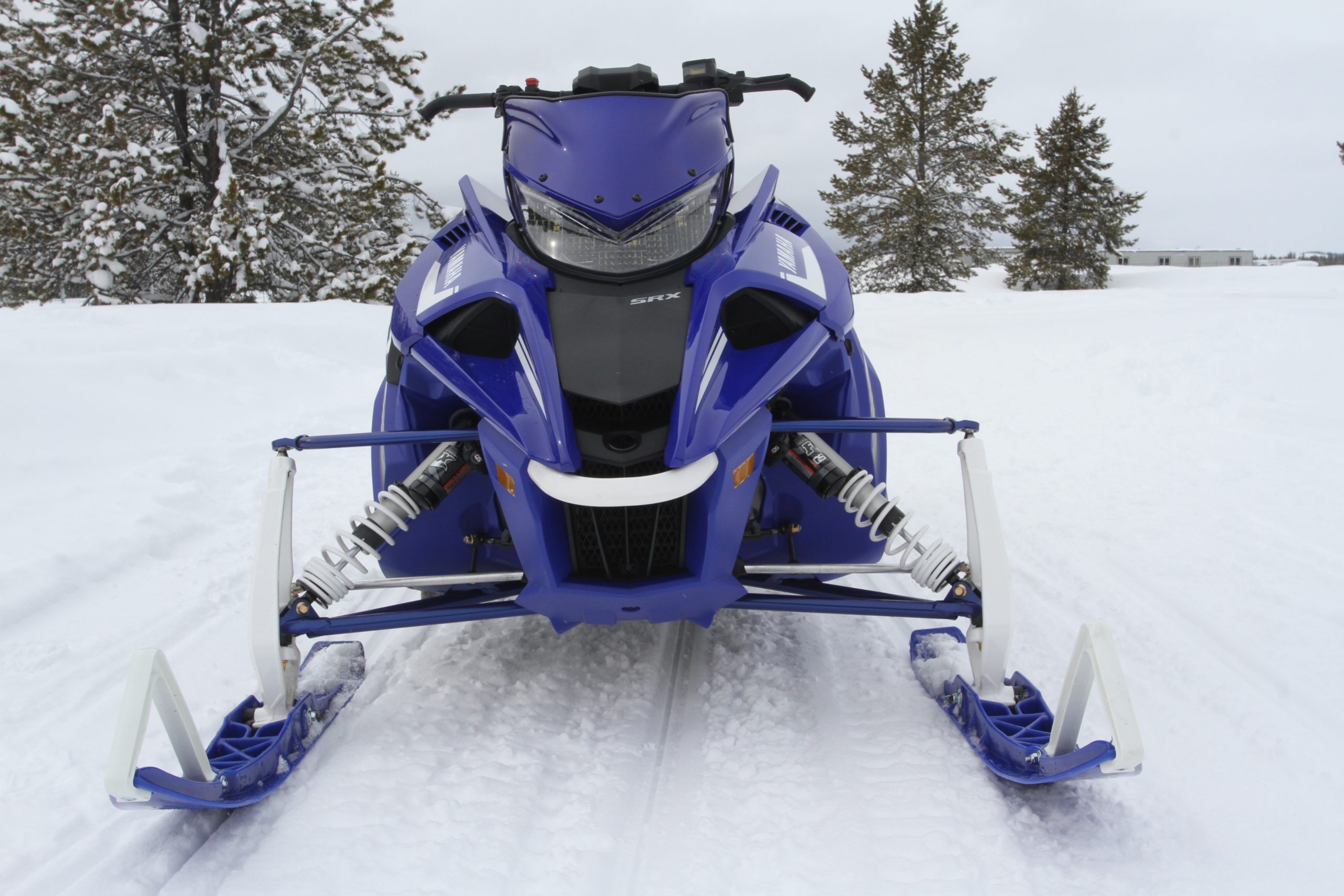 There is not much to say about the power of the 998 Yamaha Genesis Turbo engine that hasn’t already been said, and if you read the previous article, looking back at my 2018-2019 season on the Yamaha SRX, you should understand that I was pretty impressed with the balance of suspension, and how this sled worked on the trail. Although I didn’t get into it much, the 200 or so odd horsepower did add to the ride experience of this sled, right up to the point where we added 80 more ponies to the mix!

About halfway thought the season, STV made a trip to see the boffins at Precision EFI in Ste.Eustache Quebec, just outside Montreal to tune our SRX up with some of the products they’ve developed pushing our SRX to 280 horsepower. This part of the story is about how the rest of last season went living with a sled pushing this much power.

What I want to start with is what did change, which was absolutely nothing, unless you called for more power from the trigger. The SRX felt exactly the same at slow or moderate speeds on the trail, fuel consumption didn’t really change, it started just like it always did, it looked the same, and aside from a Precision EFI sticker on the hood, you would never know that we did anything. Even on family rides, where the average speed probably hovered somewhere around 30 km/h, the SRX was super docile and a favourite amongst riders, not because of the 280 horses, but because it was so easy to ride… and had a heated seat.

In the past, I’ve ridden modified sleds with big power, and if I’m completely honest with myself, they weren’t really that fun. They were loud and ran hot, they were unreliable, not very user friendly at all, and would never be my first choice to put a family member on for lazy day cruise on the trails. I suppose I can thank technology and forced induction systems for this shift in what a modified machine is capable of, but also in the seamless integration of the modifications made by Precision EFI. 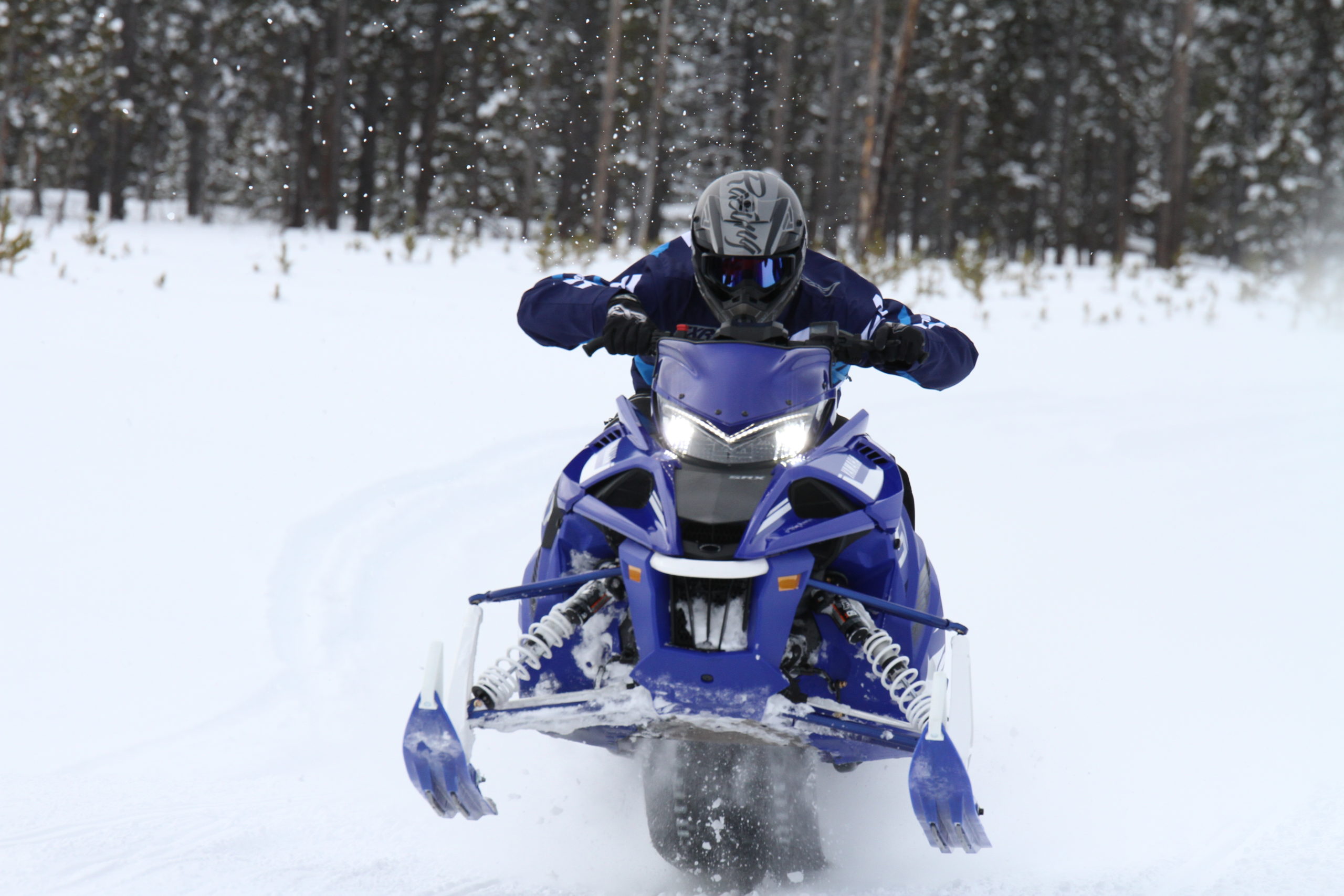 Things changed when circumstances allowed full use of the extra power on tap. Even without traction aids in the track, the new SRX would absolutely charge out of the corners, yet it still maintained that balance of handling. Throughout the sweep of the throttle, there was just “more” without any unpredictable hit of power. Like I mentioned above, the SRX could be docile with small inputs of the thumb, but as you would progress through the range, the extra power became more and more apparent.

For all out acceleration, studs or a deeper lug track would be a benefit I admit, but the short 1” lug of the stock track allowed for dirt track type corner exits which continually put a smile on my face. Going back to look at the marks left by the SRX, you could see how the track would sweep a path through the corner, but didn’t dig a trench.

Everything seemed to be turned up to 11 with the extra power, but this also made paying attention that much more important. The new power would accelerate you to speeds that can take you into new territory, but as a rider you have to remember there isn’t any more braking available to you! In stock form, the SRX demanded that you think ahead. With the extra power of the Precision EFI Stage III kit, you needed clairvoyant-type forethought to keep from overdriving into the turns. 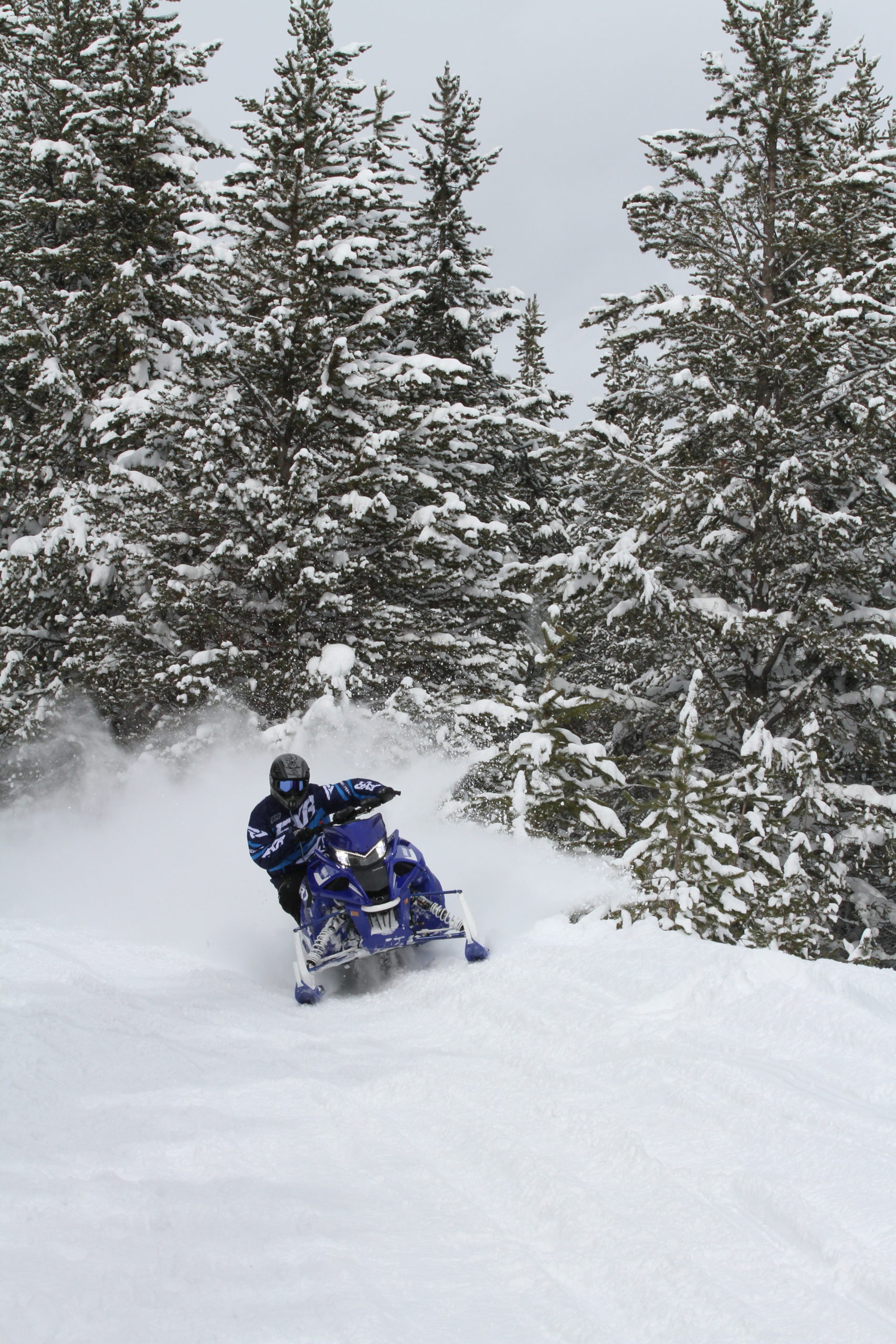 We never did get a chance to run the SRX on a radar gun to verify top speed, but without more rear grip, I know terminal velocity wouldn’t be totally realized. Instead, my thoughts are from a seat of the pants experience and thinking back to last season, and I’m left with one final thought – I want more power! There is one more kit stage available at Precision EFI, pushing the total output to 320 ponies. I’ve ridden their shop sled with this power, while equipped with a copious amount of studs, and it’s more all over again. I do think this type of power would be too much (essentially wasted) on the SRX, with only a 1” track. Maintaining the balance between handling and power will become a challenge, but I think I’d like to take on that challenge.