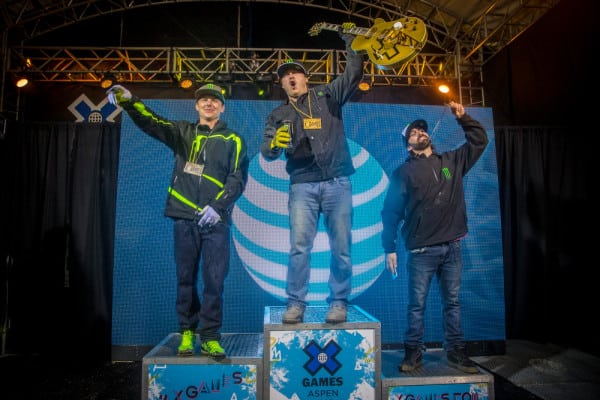 Tonight’s Monster Energy Snowmobile Freestyle event was set up to be an epic show. Each of the eightriders in the finals gets two runs with their top score counting. The judges look for variation in both rightside up and upside down tricks with extension also key—the more tweaked out and stretched the trick, the higher the score.

The field was ready to battle. Parsons was hungry—though he has three Gold medals to his name, he’s been gold-less since 2011, settling for Silver five times. Also hungry was Turcotte, a former racer who was appearing in Snowmobile Freestyle for the first time ever tonight.

Throughout his career Parsons has been known as an extremely consistent competitor. With 15 medals counting tonight’s win, he is the most decorated snowmobiler in X Games history. Tonight that consistencystrategy paid off as he threw down a duo of runs full of both technical, dangerous tricks as well as variety. In run one, the 28-year old ex-racer threw down his trademark Gator Wrestler, a switch flip, and a super late “Parsby” flip (aka a sit-and-spin backflip) as an ode to his teammate Frisby. The score locked in the Gold.

After the final, Parsons said, “I didn’t play it safe, and put down the run I wanted to. Always being consistent is my game plan, and tonight it paid off.”

Meanwhile his teammate Frisby, a consistent podium threat, brought his trademark amplitude to tonight’s final to bag the silver. Known for his massive tricks, the 31-year old showed great variation both rightside up and on backflip variations. Tricks included a tweaked-out Kiss of Death backflip to earn a big score of 87.66, a testament to the fact that the judges appreciate the big tricks. This is the 11th career medal for Frisby.

Excited that he and his good friend Parsons took the top two spots, Frisby said, “Joe and I knew there were a lot of gnarly guys, but we rode smart and did what we could best. People just made mistakes and Joe and I fell right into gold and silver, the two amigos. So pumped!”

Taking the Bronze medal, Turcotte looked calm and cool coming into his first-ever X Games freestyle competition. A former racer, he now practices at home in Canada on his 100-acre lot at 8,000 feet, perhaps the perfect training ground for Aspen conditions. After an impressive practice, the 27-year old quickly became a podium favorite. Taking the unique approach of keeping the sled pinned while jumping and racing around the course, he goes fast and fits in a lot of tricks. His second run was his best and full of combination maneuvers, including heel clicker to superman flips, super flips, and big one-footed whips.

Turcotte said, “It was a pretty eventful night. I put together a run I knew how to do and it got me a medal. We got a bunch of Monster athletes on the podium, so I’m stoked. I’m ready to go home and shred some trees and pow, and film some backcountry segments.”

Meanwhile, their MonsterEnergy teammate, Davis backed them up, looking sharp and earning 4th place thanks to a fully committed run. Besides some technical backflip variations, Davis brought his huge tweaked-out whips that send his 450 lb sled sideways and beyond, certainly a fan favorite.

“Tonight was crazy,” continued Parsons after the final. “I didn’t expect to get the gold, but sometimes things just fall into place, and they did tonight.”

Monster Energy returns as the official energy drink partner of X Games. Check out monsterenergy.com and Monster Energy Facebook now and throughout X Games Aspen 2016 for exclusive photos, videos, and contest results as they happen. Search #UnleashedAtX on Instagram and Twitter for exclusivebehind-the-scenes looks in Aspen.