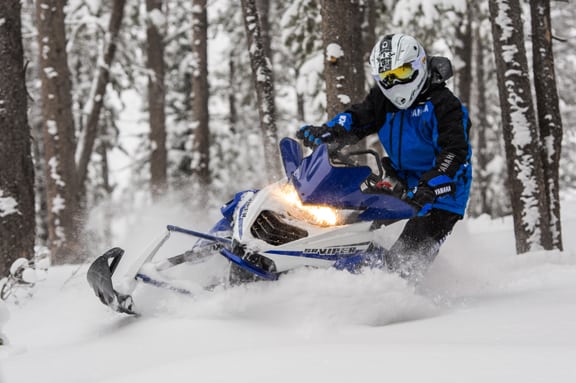 After shocking many of us last winter with the announcement of the “partnership” between Yamaha and Arctic Cat and the subsequent launch of several all-new Viper models, it should come as no surprise the relationship will continue to bear more fruit in 2015. With the mountain segment being nearly forgotten for several winters, despite the addition of a turbo boosted power-up for the Nytro MTX, it is here where much of the “new” emphasis is placed for 2015.

The new SR Viper MTX series picks-up where the Viper of 2014 left off, combining the stable and refined Arctic Cat chassis with the Nytro 1049 three-cylinder four-stroke in three mountain specific models. The SR Viper MTX 153, MTX 153 SE, and 162 SE, are all-based on the SRV Mountain Chassis (read Arctic Cat ProClimb) with a stretched tunnel, open running board design, and key areas of weight reduction including the elimination of the rear heat exchanger.

The biggest and baddest mountain buggy in the Yamaha stable for 2015 is the Viper MTX 162 LE. Along with the blue and orange wrap, the LE receives FOX EVOL shocks up front versus the Float 3 units found on the MTX SE