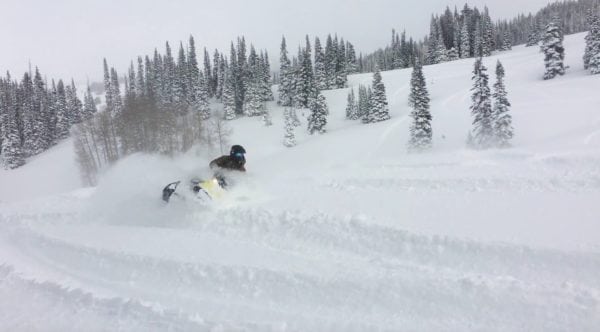 Teton Gravity Research (TGR), best known as the global leader in action and adventure sports media has tackled something far larger than a steep ski line in their recent documentary, Mountain in the Hallway.  The film explores the stark realities that surround Colorectal cancer, and grounds us and inspires us to never stop living.

Told through the lens of two fathers battling colorectal cancer connected by their struggle, their desire to live fulfilling mountain lives, and the sacred landscape of the Grand Teton. After being diagnosed with colorectal cancer both Tate Macdowell (skier and cinematographer) and Brian McDonnell (snowmobiler and small business owner) underwent chemotherapy, surgery, and spent large swaths of time wandering the halls of their respected hospitals. In their wandering and waiting for the nausea to pass, they both found themselves entranced by the dramatic relief and exposure of the highest point in the Grand Teton National Park. The Grand Teton, looming 13,775 feet over Jackson’s hole, is the mountain in the hallway.

Through social media and mutual friends, Tate and Brian became compadres as they fought through chemotherapy and multiple surgeries. Ultimately, the mountain in the hallway became a common goal that offered strength, peace and motivation. Tate and Brian decided to meet in-person and attempt to climb the Grand Teton together. With the generous support and sponsorship from Black Diamond Equipment, Teton Gravity Research and Exum Guides, both men gathered in the shadows of the Tetons to celebrate the mountain, their families, friends and life.