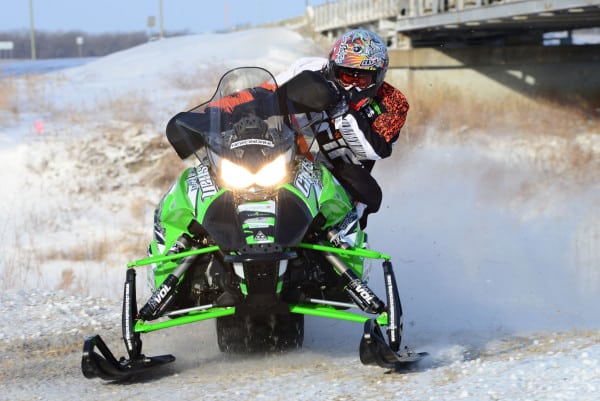 As riders across the snowbelt scramble to make plans for one or two final burns, racers as well are prepping to complete the season with one last push for podium results. Back in the wooded and lake populated terrain of Minnesota, high speed terrain readers in the USXC cross-country circuit made one last push for points as the year end battle came down to a race in the far northern community of Warroad.

As the terrain performers crossed the line, the year-end crown came down to a battle between a pair of FOX shock equipped athletes. With one race thrown out, the margin of victory for Arctic Cat rider Ryan Simons over fellow Cat pilot Zach Herfindahl was a mere 4-points. Both riders had stood atop the podium throughout the season, but it was Simon’s I-500 victory and Herfindahl’s uncharacteristic poor showing in Thief River Falls that spelled the difference in the end.

Just to the south, in the wind swept border town of Fargo, North Dakota, the ISOC national snocross tour was nearing the end of its daunting coast-to-coast journey, and FOX athletes once again crowded the podium with Tucker Hibbert and Ross Martin splitting the Pro-Open main events, and the emerging dominant player in Pro-Lite, Jake Scott, taking both wins. With only the Grand Finale remaining in Lake Geneva, it’s nearly a foregone conclusion that FOX shock equipped sleds will dominate the year-end results as well with Hibbert and Scott leading the way.

Controlling the Ins and Outs

If you’ve been to a race or own a well-equipped snowmobile with premium suspension components on it, you’ve more than likely seen those shiny little knobs affixed to the upper or lower shock body. Commonly referred to as “clickers” by the big talkers at the local sledder hangout, those knobs can spell the difference between comfort and control or trip to your chiropractor. While most understand the basic function of compression damping, the nuances of rebound control are often far more complex to “feel” and tune.

In layman terms, rebound damping controls how quickly your suspension returns to a “ready” position after encountering a bump. A rate too slow will result in a condition called “packing” where the suspension isn’t fully ready for the next bump and doesn’t offer an adequate amount of travel. A rebound setting that is too quick results in a condition called “kick-back” where the suspension returns to ready too quickly and feels like a giant spring, pushing the sled and the rider upward with force.

While rebound settings are often a personal preference, and change with rider weight, riding style, and trail conditions, here is a good rule of thumb. Set rebound to be as fast as a possible without “kicking” or feeling bouncy. For slower rebound turn the knob clockwise, for quicker, turn counter-clockwise.