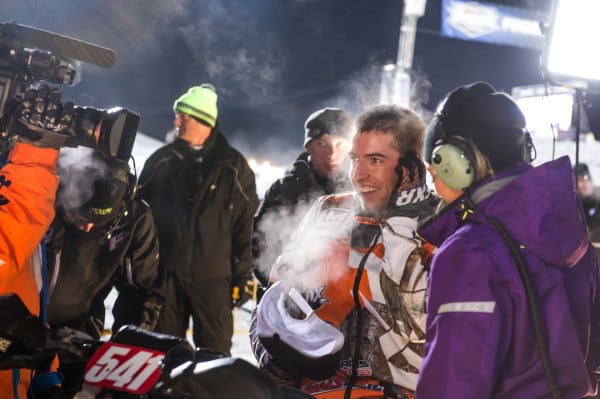 Prior to the start of 2014-’15 AMSOIL Championship Snocross season Ryan Springer (Carlson Motorsports/Polaris) wasn’t on the experts’ short list of potential champions. Springer himself said before start of the season he’d hoped to make the top five overall, along with maybe some front row starts in the main events. If Springer’s very first Pro race at the Duluth (Minn.) National – where he didn’t even make the main event – was any indication, 2014-’15 was going to be a learning year for the rookie Pro Lite racer and defending National Sport class champion.

“Coming into the season and coming off the National Sport class championship I knew I had some speed,” said Springer. “But I knew I definitely had a lot of things to work on. There’s lot of fast guys in this class so I knew I not only had to be consistent, but that I could also never give up.”

Buckling down and grinding things out is nothing new to Springer. A high school varsity football three-way player/starter (DL/OL/Special Teams) and varsity baseball player, Springer understood relentless practice of your craft is paramount to success. It didn’t hurt either his first passion, which far out-weighed team sports, was the love of dirt bikes and motocross racing.

“I made the All-Area teams in both sports, but I was the kind of kid that was more focused on motocross, so I never tried that hard in the high school sports,” he said. “I made all the practices, went to all the camps, but my mind wasn’t into school sports – only motocross.”

What the discipline that comes with daily practices and participating in team sports, along with a strong work ethic instilled by his parents and small farm-owning grandparents, Springer would parlay his passion for motocross to snowmobiles and set out to see what he could accomplish as a pro.

ISOC PR man Pat Schutte caught up with Ryan Springer and got his take on how this year’s AMSOIL Championship Snocross Pro Lite title would come his way, the road he took to get there and where that road’s leading him now.

Pat Schutte: From motocross to snocross – that’s a transition that’s not at all uncommon in snocross, but you were a late-comer to the sport, only having raced for a couple years before turning pro. Talk a bit about how you crossed over, and what you learned in motocross that’s helped you with your snocross career.

Ryan Springer: “Growing up as a kid my dad always had old trail sleds and I’d ride them for fun around the farm. But motocross definitely helped with my success on sleds, along with all the hard work. I train year ‘round and paid for everything, 100-percent out of my pocket when I first started (snocross). My parents said ‘We covered you racing motocross, now you’re on your own.’ So I know how much it costs for gas, food, a place to stay, entry fees, parts – all that. I can give you the exact dollar amount.”

Schutte: You didn’t get off to the greatest start on the opening day at Duluth, but then rallied big time on day two. At the next two events (Fargo, N.D. & Shakopee, Minn.) you didn’t quite put up championship numbers either. So when did the Pro Lite title really start to come into full frame for you this year?

Springer: “You’re right, it started out pretty rough. First day at Duluth I didn’t even make the final. But the second day I won by 15-seconds. We went into Fargo, and that was also a bad weekend for myself. Canterbury was better, but I wasn’t able to put together a win. So as far as when things turned around I’d have to say Deadwood (S.D.). The first day I finished 5th or something, though I thought I raced pretty well. Then the second day I won.”

Schutte: That brought you to New York where you went 1st/1st. From there, if there was any question as to who the favorite was as season’s midpoint, your name now had to be mentioned amongst Leighton, Carlson, Muller and Johnstad.

Springer: “I think that’s where I definitely started climbing up in the points, and I can look back at New York knowing that we did very well.”

Schutte: Did the season surprise you at all, or were you confident all along that you could race with the returning stars of the Pro Lite class?

Springer: “I never thought – before Duluth – that I’d be the one leading the championship. I was hoping to make the front row in the main events, dabble for the podium a couple times there. But never did I think I’d win almost half of the races. So I think I surprised myself, along with a lot of other people…I couldn’t be happier with that.”

Schutte: By mid-season the points were really close. Your teammate Andrew Carlson was in the hunt, Trevor Leighton was leading, Travis Muller and James Johnstad were close, and Elias Ishoel came out of nowhere to be in the mix. Including yourself, there was like six guys that could have won this, but out of all of them you became the guy to beat. Was there any added pressure on you being up in front?

Springer: “The first half of the season there was like six different winners and the points were really tight and I knew anything could happen. So when I did well in Deadwood, then swept New York, people started to realize that ‘Alright, Springer’s starting to turn it up.’ Some of the guys I was racing against had been in this class for four or five years. Myself, in my rookie year, I didn’t have the pressure that everyone else did. I was just going out there and having fun…did the best I could. So I think after I held that red plate for a bit, especially coming out of Michigan (Springer went 1st/1st again), that turned the pressure into confidence.

“I told myself ‘Hey, I won the last six out of seven races and I know for sure if you just get a top five start, ride smart and smooth, that’s all I gotta do.’”

Schutte: So you pretty much wrapped up the Pro Lite title prior to Lake Geneva (Wis.). Was that fun to be able to share the championship with your team, then run the Pro Open class on the final day?

Springer: “Yeah, I hopped on the mod there Sunday at Lake Geneva. Felt I rode pretty well, but granted, I made couple mistakes.”

Schutte: One rewarding aspect of the Carlson Motorsports/Polaris team is that your mechanic, Josh Groen, is actually your boss in real life. That’s a rather unique relationship given the pro racer is usually the boss – and hires the mechanic. How did that relationship between you and Josh work out so well, or could it be difficult at times?

Springer: “Oh, no, not at all. I don’t get that worked up about mechanical stuff. I stay really focused. (Note: Springer’s workmates call him the “Surgeon” given his precise skills on heavy equipment.) Granted, I’ve only been in this sport for a couple years, but I know how it goes. You’re going to have mechanical failures, you’re gonna have bad weekends, you’re gonna fall, you’re gonna crash…there’s so many different things that can happen, and that’s why it’s called racing. If an engine goes down or I break the suspension I never get worked up…that’s just the way it goes.”

Schutte: Well, again, congrats on your Pro Lite title and Pro class Rookie of the Year crown. To win one’s huge. To win both in the same year’s unbelievable. What do you have going on here this summer, and are you returning to AMSOIL Championship Snocross next year to defend you Pro Lite championship?

Springer: “We’re busy tearing down some sleds now, putting them all back together for next year. I’ve also got a (Polaris) RZR deal with Bikeman Performance out of St. Croix Falls, Wis. I’ll be running the GNCC Series along with a bunch of Iowa stuff as well. There’s 20-some races this summer and I’ll be racing a Polaris 900 and a Polaris 1000 Open. So I’ll be moving over to those rides here next week, start getting them dialed in and comfortable.”

“After that the plan is for both Andrew (Carlson) and myself to likely run Pro Open next year.”

Schutte: Right on. Well thanks again, Ryan, for taking the time to talk about your improbable Pro Lite championship run in your rookie year. Best of luck racing UTVs this summer. We’ll for sure keep an eye out for you on the GNCC Series.

Springer: “Thanks and I look forward to seeing snocross fans at the races this summer, HayDays and back at Duluth this November. Have a great summer!”