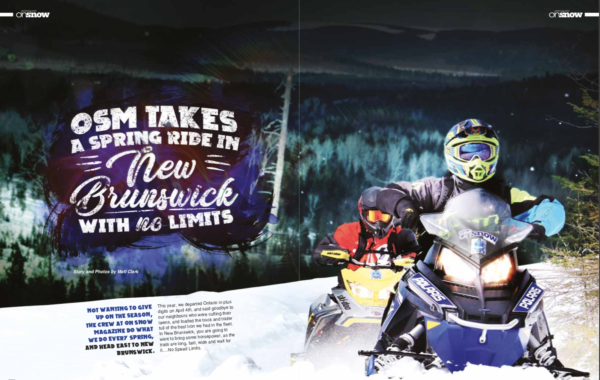 Not wanting to give up on the season, the crew at On Snow Magazine do what we do every spring, and head east to New Brunswick. This year, we departed Ontario in plus digits on April 4th and said good bye to our neighbours who were cutting their lawns and loaded the truck and trailer full of the best Iron we had in the fleet. In New Brunswick you are going to want to bring some horse power as the trails are long, fast, wide and wait for it….No Speed Limits. 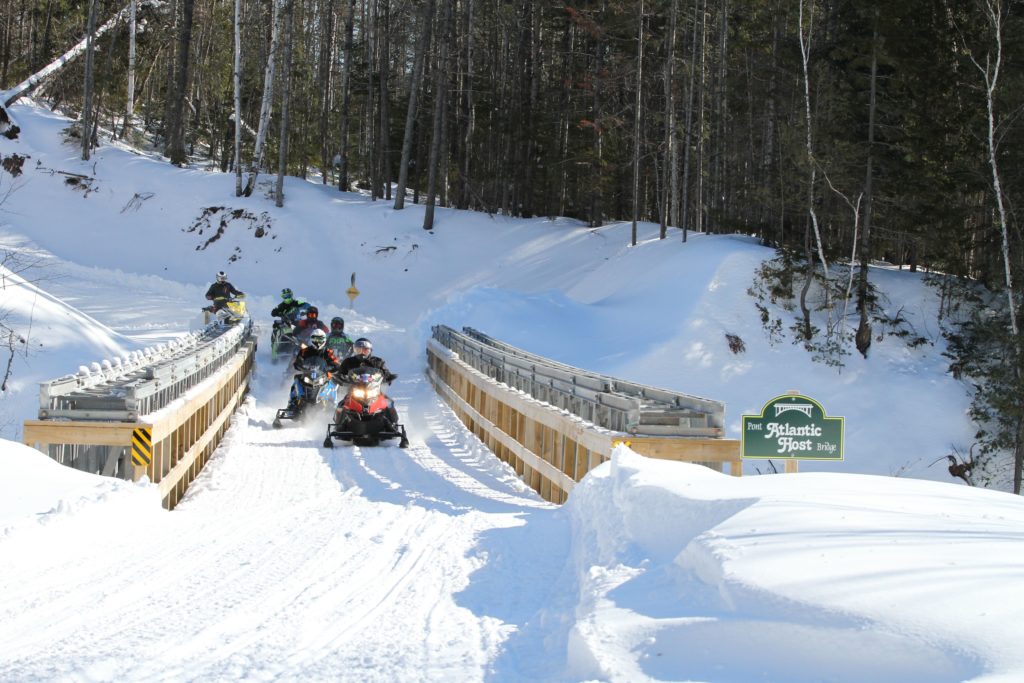 This tour would have us driving to Campbellton which on a good day is around 13 hours from the Toronto Area where our office is. The drive is an easy one, straight across the 401 through Quebec, then into the province of New Brunswick. It is amazing though what the weather can do on a 13 hour drive. Upon arriving into the eastern portion of Quebec, just outside of Quebec City, we caught up with a snow storm that was hammering the east coast of Canada. This is why you go riding in New Brunswick; there is always snow, and sometimes there is too much. We were diverted off the high by the local Quebec police and were told they had just closed the highway down and that no more traffic will be passing that night. Well that is what happens sometimes on snowmobile road trips, so we made the best of it, found a local hotel in Quebec City and called it night.

The next morning we were up early and making tracks to Campbellton where we would meet up with Ross Antworth, General Manager of the New Brunswick Federation of Snowmobile Clubs (NBFSC) and Brad Mann current president to spend 3 days on the trails. Because of the slight hiccup and losing a day due to closed roads, we decided to get dressed in the lobby of the Quality Inn and Suites which has ample space to leave truck and trailer in the parking lot, and take the trails to the Atlantic Host Hotel in Bathurst which is a relatively short day in New Brunswick. The most resounding message we can offer when you are riding in New Brunswick is you can make up big kilometers on this trail system because the trails are fast, wide open and did we mention no speed limits? This does not give you the right to ride past your abilities and remember you are going to be riding in some remote areas, so blowing a corner is going to make your trip not much fun. 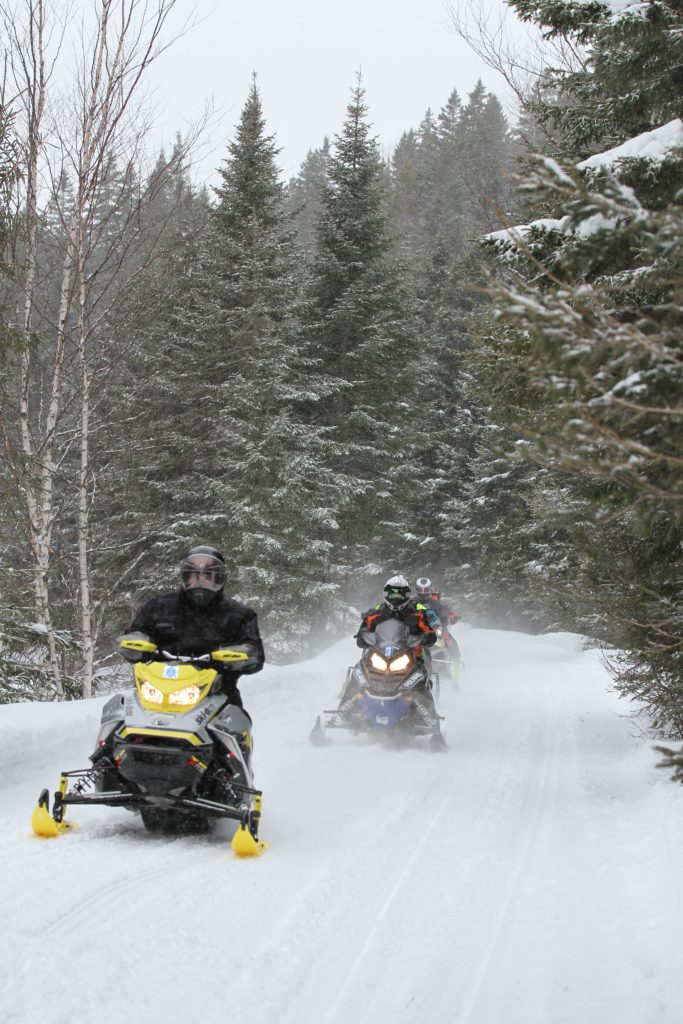 Arriving at the Atlantic Host Hotel, you immediately know you are at a hotel that caters to Snowmobilers. From the heated garage, friendly staff and premium gas on site to even the daily trail report at the check in counter, when you get there, you just know you are in the right place. The hotel has very clean modern rooms, and the pub that is attached to the hotel is the perfect ending to the perfect day. 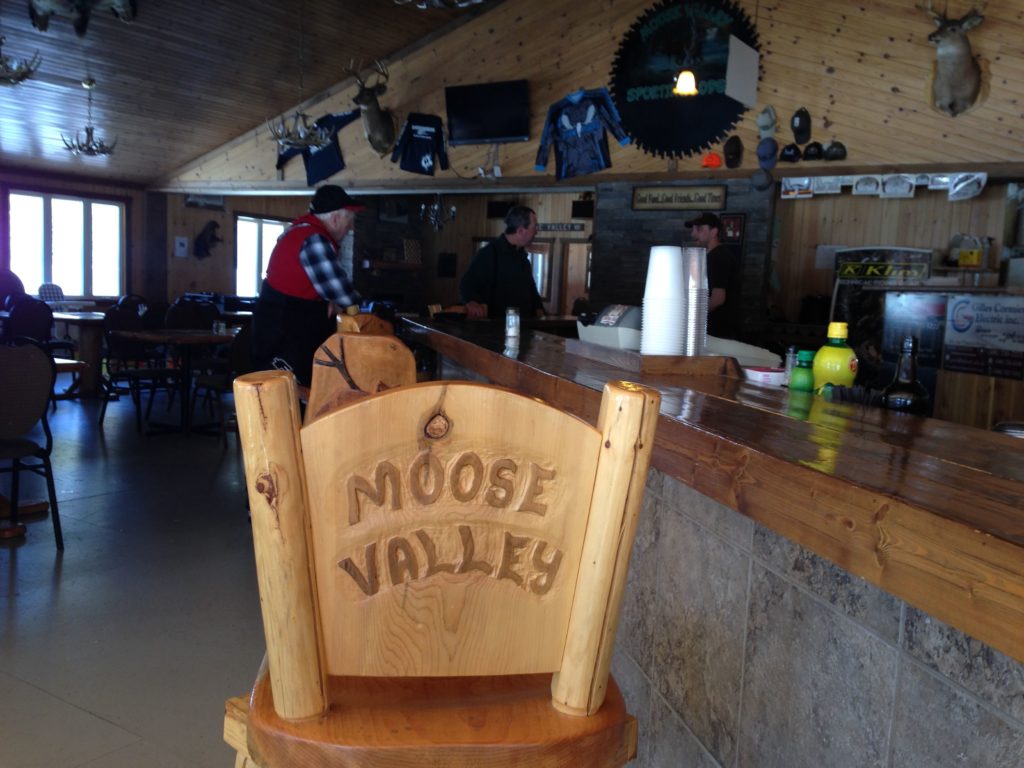 The next day was our big ride day that would see us depart the Atlantic Host, ride through the Christmas Mountains and end up in Saint Quentin at the amazing Bed and Breakfast, Du Repos Inn. This route is some of the best riding you will ever find on a snowmobile if trail riding is your thing. It is a perfect mixture of fast sweepers,  double wide logging roads, epic elevation changes and a portion we all love to ride; Piston Alley. The route has you travel through the Christmas Mountains which is part of the Appalachians range that is a series of rounded peaks that the trail cuts through. On a clear day, you had better bring your camera because you are about to get some amazing scenic photos. After a short run from the Host Hotel we stopped in for a coffee at the Nepisiquit Sport Lodge and Club House. The New Brunswick region takes their club houses very seriously and they are a big part of the system. From here we were off to lunch at the newly renovated Rogers Lake Lodge. The lodge is completely set up for snowmobilers, and offers amazing food, gas on site, and lodges you can rent if you want to make this your starting point as it also boasts a huge plowed driveway to leave your truck and trailer. After an amazing lunch, we were off spinning tracks towards Serpentine Lodge which had us riding the legendary Piston Alley. If you have not heard of Piston Alley is called that for one reason and one reason only; there has been a ton of pistons blown on this part of the trail. Piston Alley is a run that is wide open, not one turn, and filled with stomach flipping rollers that make you giggle every time you hit one. One travelers note to Piston Alley; if you have some kilometers on your belt, and you have a spare one on board, may we suggest you swap that old belt for a new one. Trust us, blowing a belt on Piston Alley is not fun for anyone…accept the guy that said; “Hey Matt you think you should change that belt first”? 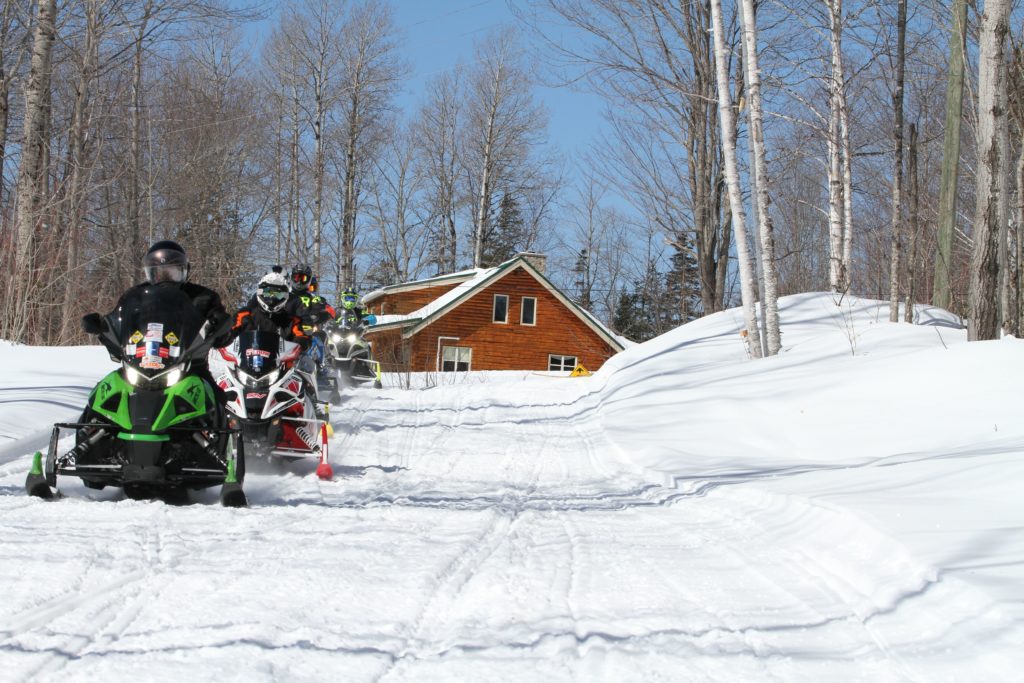 After the Piston Alley “high fives” were over with we headed to visit Alyre of Serpentine Lodge who is a very important part of the trail system. The one thing you begin to realize while you are sledding in New Brunswick, is just how far you are traveling and the kilometers you are covering. Having gas accessible in the region takes guys like Alyre that run the lodges to keep the system open. Without them snowmobiling on this part of the trail would be much more difficult. Another Travels Note: Never ever pass up gas in New Brunswick. Having a few extra liters on board is not necessary, but comes in handy should you be the guy that went back and ran Piston Alley twice.

After gassing up at Serpentine Lodge we were off making tracks to Saint Quentin for the night. The B&B Du Repos was our next overnight location and is a great place to stay. It is located directly off the trail and offers very modern cabins and all the amenities a sledder would need. For dinner the town centre of Saint Quentin is located a quick cab ride away, and offers several options for dinner. Stop in at the adult beverage store on the way out and hang out in the rooms to regale with your buddies the day’s events and stretch the truth on, just how fast, you got your sled on Piston Alley. 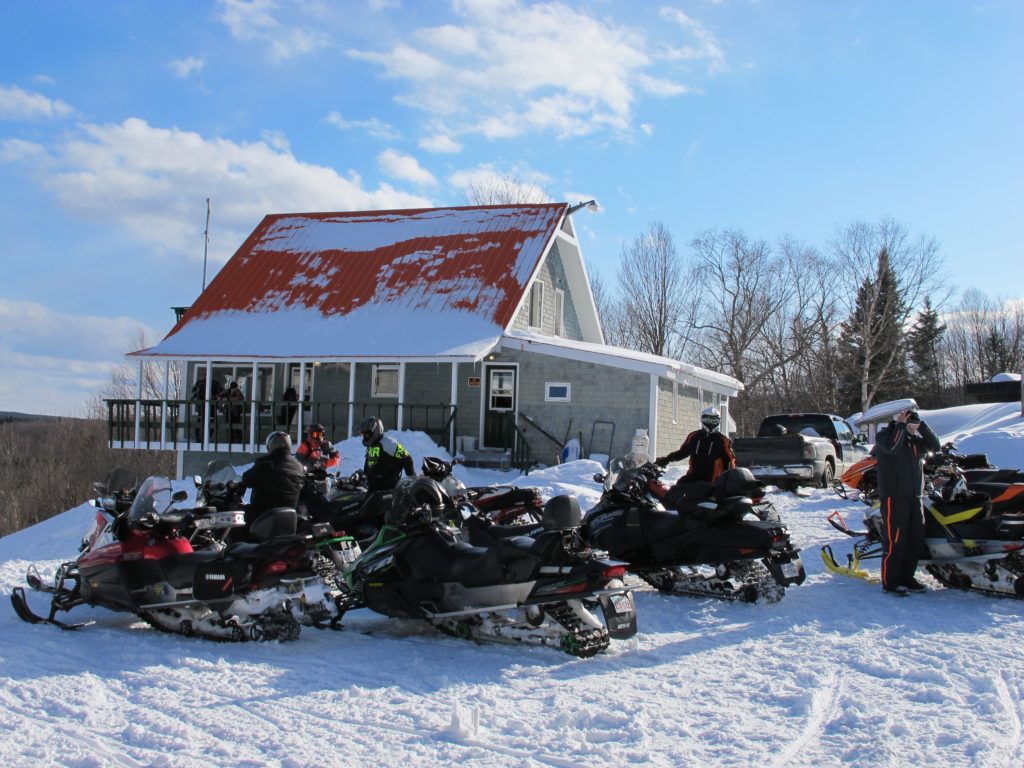 The next day had us up early and heading out to make tracks back to the truck and trailer that was at the Quality in Campbellton. This part of the trail was filled with some amazing fast trails and then you start to get into some nice wooded areas with epic views. This is a relatively short day if you are on the gas, so you can get back early in the afternoon and get packed up and maybe start driving back to Ontario. Our crew decided one more night in New Brunswick was in order, and after looking at the maps and discussing our options it was all decided we needed one more day on the trails. 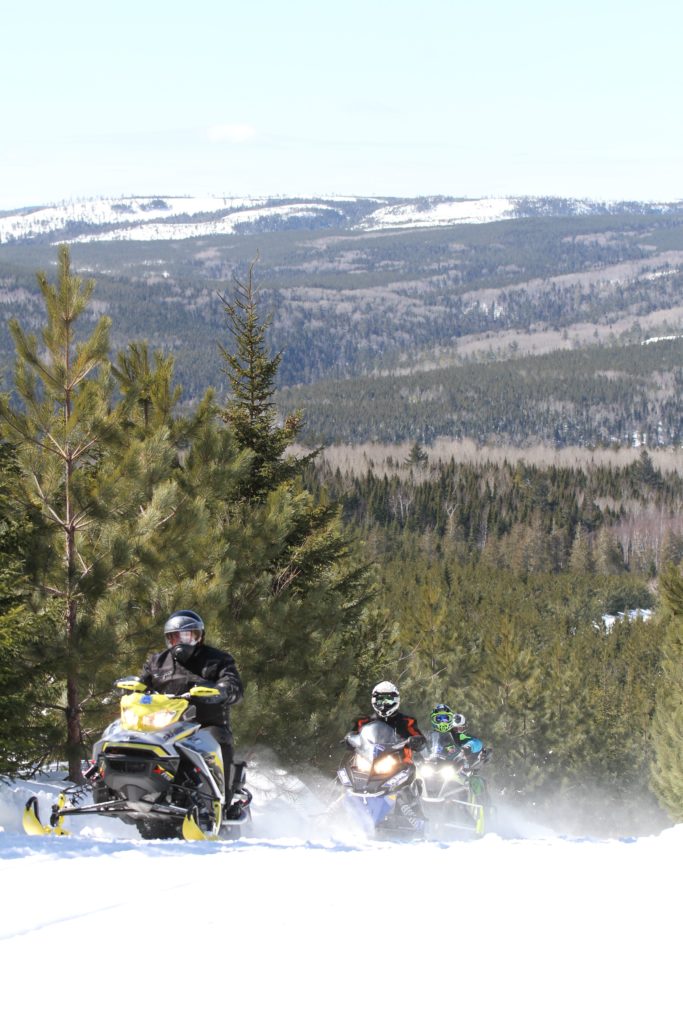 After saying good bye to Ross and Brad, we loaded up the truck and trailers and hit the highway towards Kedgwick, where we had a quick breakfast, unloaded the truck and trailers and went out for day ride to Moose Valley. This was not part of the original plan, however, we all agreed that one more day on-trail was how we were going to end the season. The trail from Kedgwick to Moose Valley takes you along some really fast straightaways, and again some epic elevation vista views. With a lunch stop at the Moose Valley Lodge (get the moose burger) and a fuel up of the tanks we turned and burned and headed back to the truck and trailer, got everything packed up and we were rolling down the highway back to Quebec City where we would spend the night and get an early jump on the drive back to Ontario. 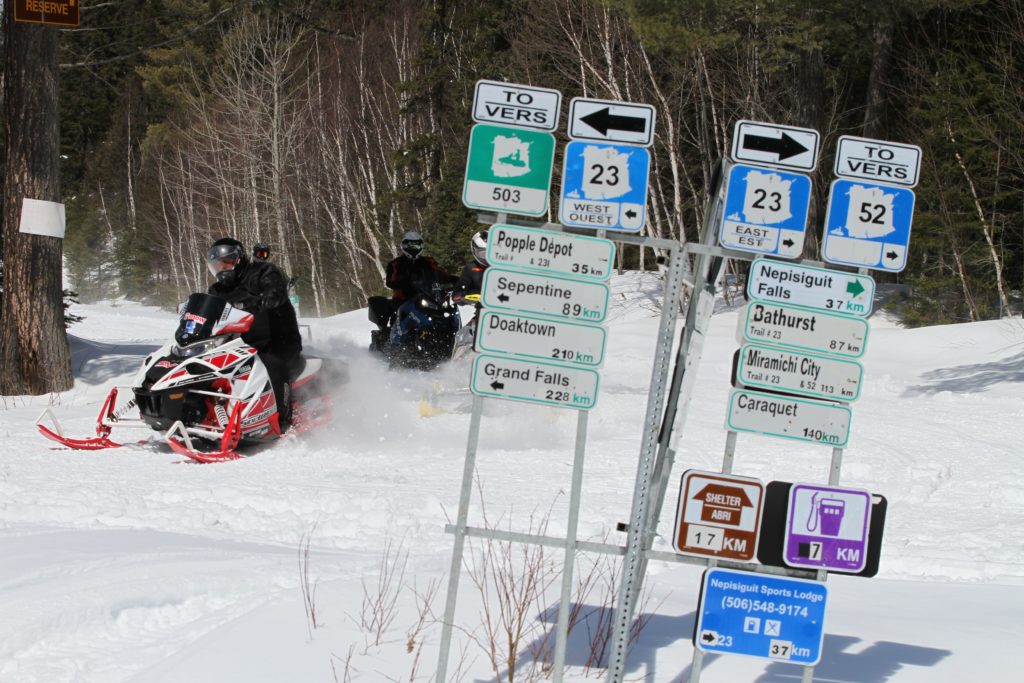 With over 8000kms of trails and an annual average snowfall of more than 130 inches, the NBFSC trail system is some of the best riding you will find in North America. If you are looking for something new and want to ride on trails with amazing signage, renowned grooming and (we will say it one more time) no limits, then New Brunswick needs to be on your bucket list.

See you out there.