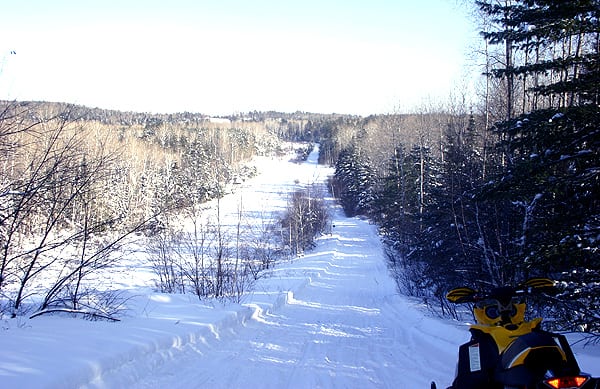 With some of the best maintained trails in Ontario and just 4 hours north of Toronto, The Ottawa Valley is a great destination for the snowmobiler that’s looking for a little bit of everything. With 2500kms of wide smooth rail lines, groomed wooded local trails, and spacious open rolling terrain, this is truly a destination that should be on your snowmobile bucket list.

Story and Photos by Matt Clark

As we all know Mother Nature was a bit remiss in getting the white stuff in Ontario, and as we loaded the trailers, for our inaugural ride of the year the snow conditions near our shop in Newmarket was pretty bleak. We were very skeptical as to the conditions we were going to find on this trip. That being said, we are enthusiasts and when we hear the slightest rumour of snow, we are packed and gone. The drive to the Ottawa Valley from Toronto is a relatively easy one. As we passed through Peterborough and made our way up north on Hwy 28, we could still see the grass in the farmer’s field. There was still no snow. Then we turned east out of Barry’s Bay onto Hwy 60 and it was like someone turned on the snow makers. The Ottawa Valley- “Snow Country” lived up to the name. It has a completely different weather pattern and as we arrived at our destination, Sands on Golden Lake located on Hwy 60 in Deacon ON; we knew we had finally found the snow. The Sands is where we made camp for the next few days of Riding in the Ottawa Valley.

Sign says it all. Do you need anything else?

The Sands on Golden Lake is completely set up for snowmobilers. Located directly off Hwy 60 in Deacon it puts you in the middle of the trail system District 6 with many options for great day loops. The Sands har ample truck and trailer parking, gas on site and, large clean rooms . Also available are private cottages that sleep up to 6 people should you be rolling with a large group. The food is local and top notch, and the après sledding is completed with live bands on Saturday night and taps of Beaus Beer, which is some of the best local micro brewed we have tasted in our travels. The beer is actually hand delivered by the Brew Masters son. It doesn’t get any more local that. They have a One Night sledder package of $99.00/person which includes accommodation, dinner and breakfast, or a Two Night for $149.00/person.

The New Bridge is Completed

Heading out on the first day we found the trails to be completely groomed and untouched. Apparently, the other snowmobilers thought the same thing we did at the beginning of the trip and did not expect the conditions to be as good as they were. Jumping on the B trail located directly behind our hotel, we headed out and started the route to Petawawa. The goal for the day was to get some miles on the new sleds, find the new bridge everyone was talking about and take in the views along the Top A Trail up passed Deep River. On this route up to the north of the region is where you will find some of the best groomed rail lines we have seen in Ontario. The work that the Ottawa Valley has done to the trail system has really started to show. The newly constructed bridge over the river makes getting through Petawawa really easy.  After reaching Deep River, for a late lunch we were informed there was a poker run up at Stone Cliff and never shall we pass up the opportunity to take in a local poker run. After spending some time at the finish of the poker run, we headed back to the hotel.

Balaclava. Who is not up for a ride to a ghost town?

One the second day, we decided to check out the eastern part of the region and take in some of the local trails. We heard from a few of the locals at the bar the night before that there was a real life ghost town located off one of the local trails called Balaclava. Who is not up for a ride to find a ghost town? After our breakfast and a quick blast across the staked Golden Lake to the south side we were on the B101A trail heading toward Eganville. After gassing up in Eganville we headed south on the E102where we would find the local trail 117 to take us to Balaclava. After meeting up with the local authorities doing a routine check on trails, we were told we were going in the right direction. The local trails were as good as we expected in the Ottawa Valley. Well groomed, and well-marked, they take you through some deep bush, popping out every once and a while through active logging compounds. Upon reaching Balaclava it was easy to see why this was considered a ghost town. The focal point is its abandoned sawmill which we came to learn was founded in 1855 and by the early 1900’s the town boomed with a blacksmith, trading store, hotel and permanent residents. The mill was eventually sold in 1957 and by 1959 was shut down after it was deemed uneconomical to maintain. That would be it for the booming town of Balaclava.  After checking out the mill, we headed back up the local trail to connect up with A trail and head into Renfrew. This is the part of the Valley that you notice the farming aspect as the trail cuts through the fields. But as you expect, perfectly groomed and well-marked. The trail into Renfrew is very accessible for snowmobilers and is easy to navigate to downtown restaurants and shops.  After a late lunch it was back on the B101A trail to Golden Lake to pack up and get back to the office.

After putting on 475kms in the two days of riding in the Ottawa Valley it became very clear that the region has something for everyone. With a great mixture of pipeline, wooded windy trail, and large open rolling terrain this region is a place that should be experienced. Hats off to the Snow Country Snowmobile Association and clubs for providing excellent groomed and well-marked trails.

Where we stayed: Sands on Golden Lake.  www.sandsongoldenlake.com