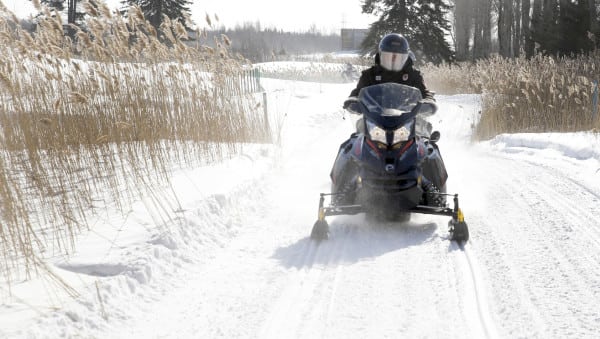 OSM recently learned that Prime Minister of Canada, Stephen Harper, threw his legs over a sled and hit the trails as part of his two day tour of the Quebec Winter Carnival, The Bonhomme Carnival in Quebec City. We at OSM salute you Mr Prime Minister, and tip our helmets to your efforts toward  the snowmobile industry. (Also, If you are ever near our offices in Ontario Mr. Prime Minister, OSM will always have an extra sled for you.)

Below is the official release from Dennis Burn, Executive Director of the Canadian Council of Snowmobile Organizations.

Ever since Quebec’s Joseph Armand Bombardier developed the first modern snowmobile in 1959, millions of Canadians have discovered that snowmobiling is one of the best ways to enjoy our long winters.
Prime Minister Harper was in Quebec City for the 61st edition of Carnival – one of Canada’s most beloved winter festivals. He joined the Fédération des clubs de motoneigistes du Québec for a ride through some of the province’s more than 33,000 kilometres of groomed snowmobile trails.

Snowmobiling is a fun and exciting way to enjoy Canada’s great outdoors, but, it is also worth billions to the Canadian economy. And, it’s responsible for creating thousands of jobs and attracts tourists from around the world.
That’s why, over the last decade, the Government of Canada has invested in the repair, improvement and maintenance of snowmobile trails across Canada.

For more information about the Government of Canada’s commitment to snowmobilers, visit actionplan.gc.ca <http://actionplan.gc.ca/en/initiative/snowmobile-and-recreational-trails>

Please congratulate Serge and Team FCMQ for making this day such a great success for all of us by hosting the Prime Minister of Canada for all the volunteers and associations involved in organized snowmobiling across Canada.