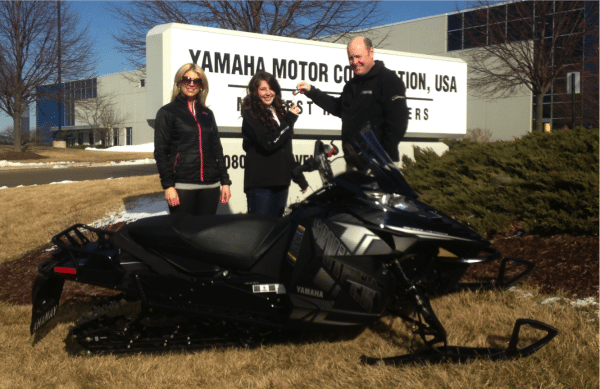 We all wish we had the luck of Stephanie Francis of Almont, MI.  She did her lucky snow dance, rolled around in four leaf clovers, and found the pot of gold at the end of the rainbow!  Stephanie is the winner of a brand new 2015 Yamaha Viper STX snowmobile courtesy of DSG Outerwear (DSG) and Yamaha Motor Corporation.

DSG Outerwear coordinated the Ride in Style sled giveaway in partnership with Yamaha Motor Corporation, Kicker Livin’ Loud, and OSM Magazine.   An online signup form was available on DSG’s website along with OSM’s website and promoted through social media outlets like Facebook.  The actual sled that was given away traveled the snowmobile show circuit and was displayed in the corporate Yamaha booth during the fall of snowmobile shows to promote the contest and encourage people to sign up.  Shows included Hay Days, Big East Powersports Show, New Hampshire Grass Drags, Toronto International Snowmobile Show, and Snowmobile USA shows in Milwaukee and Novi.   Together an outstanding prize package was up for grabs with winners announced live at the 52nd annual World Championship Snowmobile Derby in Eagle River, WI on January 16, 2015.  Winners were:

To learn more about the organizers of the Ride in Style Sled Giveaway contest visit: