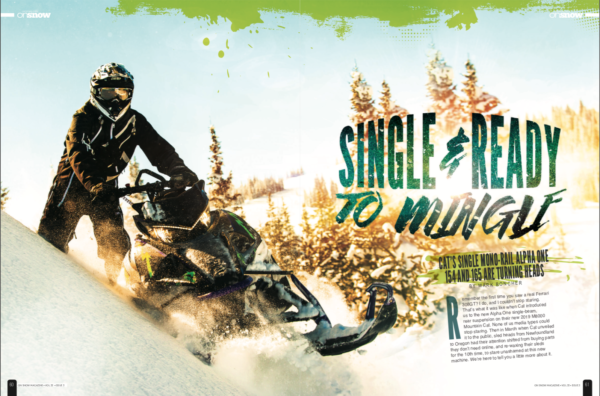 Remember the first time you saw a real Ferrari 308GT? I do, and I couldn’t stop staring.

That’s what it was like when Cat introduced us to the new Alpha One single-beam, rear suspension on their new 2019 M8000 Mountain Cat. None of us media types could stop staring. Then in March when Cat unveiled it to the public, sled heads from Newfoundland to Oregon had their attention shifted from buying parts they don’t need online, and re-waxing their sleds for the 10th time, to stare unashamed at this new machine. We’re here to tell you a little more about it. 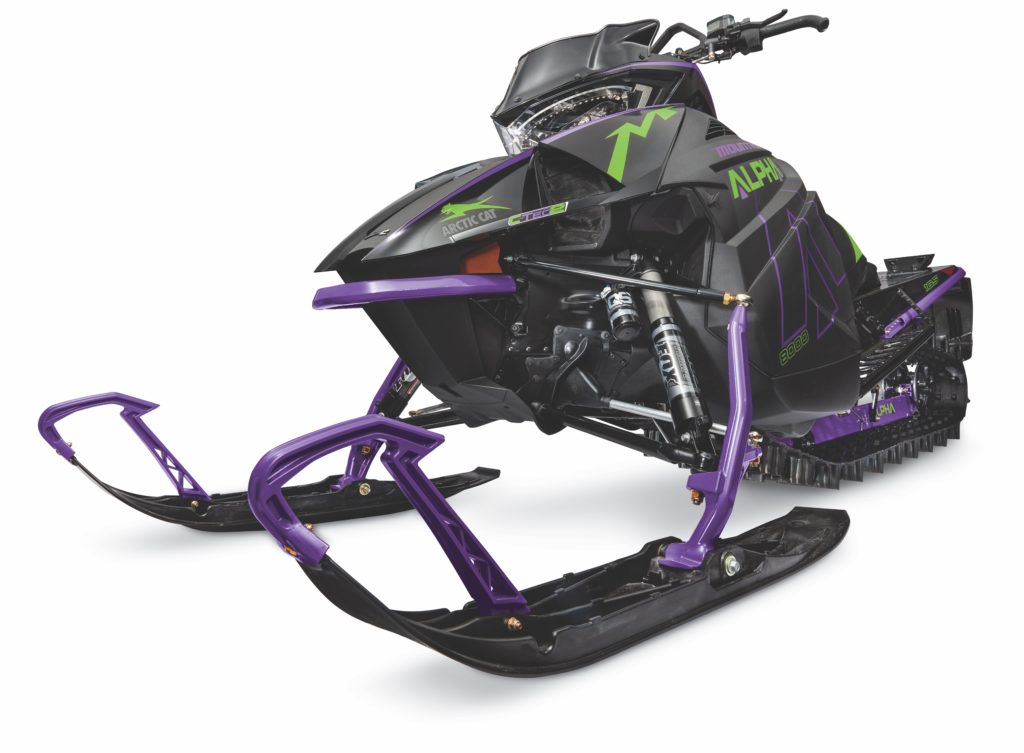 The Alpha One probably has more in common with snow bikes than other sleds on the market at this point. At least there are other single beam, rear suspensions in the snow-bike market, (Camso in particular) but there is nothing like this on a sled anywhere else. I am positive now that I said that someone will spend four days online, Googling photos, to try to find something crazy that uncle Eddie made in his barn that could be considered similar… just to prove me wrong. But that’s beside the point; Cat has done something on a huge scale that was squarely focused on the rider, and making their experience in the backcountry better. About the only thing that really stayed the same for 2019 was the excellent 794cc DSI twin, liquid CTEC2 motor in the belly of this beast!

The Alpha One is an aluminum beam with magnesium attachment points, and it is lighter than Cat’s conventional Float Action mountain rear suspension. The PowerClaw 3.5-inch pitched track (no longer a 3-inch pitch) is lighter too. That track is not a Flex-Edge track like what’s on the Ski-Doo Summit mountain sleds, but it does flex around the mono-rail skid. The Summit skid has a typical two rails, so there’s two separate places where the track flexes around the hyfax. Obviously, this works A LOT differently on the Cat Alpha One, and the ride reflects that. The slightly stiffer PowerClaw actually holds shape and moves around the Alpha One, making the bite better, and the predictability in side-hill and other situations is greater, in my opinion. 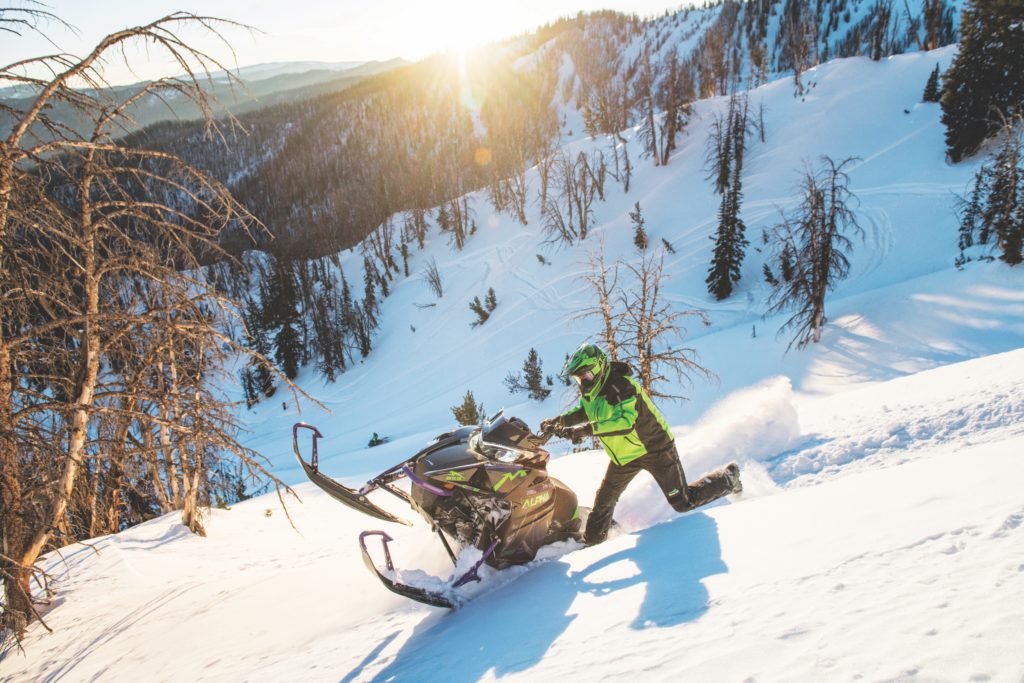 Hook-up on both the 2019 M8000 in the 154-inch long version and the 165-inch iteration is positive as well. 3-inch lugs have become pretty much the norm for big powder sleds, and that is no different here on the Mountain Cat Alpha One. It also comes standard with the adjustable Fox Float 3 QSL shock in the rear of the new skid. The L designates the ‘lockout’ feature which allows you to lock that rear shock in situations when you might want less transfer, or maybe pulling a buddy’s sled, or a plethora of other scenarios including big hill climbing. The center shock in the Alpha One is a standard adjustable QS3 shock with three pre-set adjustments.

Another reason climbing ability was increased is that the driveshaft is lower by just over an inch, so there’s more tunnel clearance. There are 8-tooth sprockets now too, and a lower, or more precisely, a flatter approach angle. You can see this where the track rolls around the front of the skid. On trail sled guys discuss this often with regards to hyfax wear, which is also important, but the deep snow benefits are obviously most important here. Those benefits include getting up on top of the snow easier, trenching less, and allowing the rider greater ability to ride through varying snow depth conditions more easily, and as well, predictably. The windows in the track run right down the center too, which allows more flex and true terrain following from the track… it was made specifically for this sled, and this sled only. 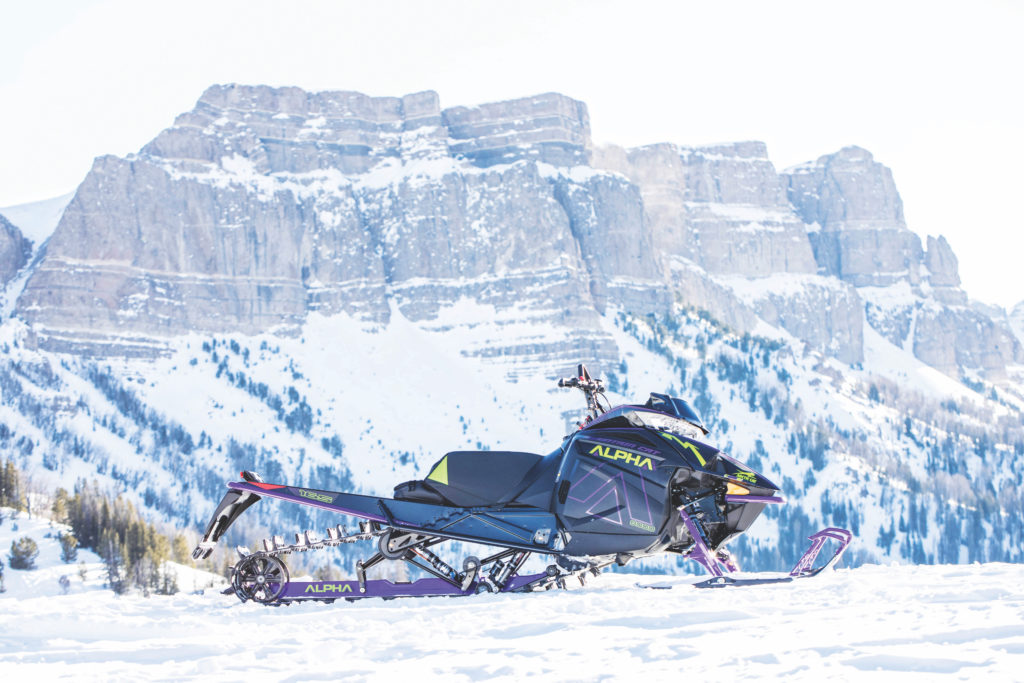 How does Alpha One help you?

You will hear us harp on predictability a lot when discussing the Alpha One. Personally, that’s the #1 important aspect to a mountain sled. I will deal with heaviness, or lack of power, but if you know what a sled is going to do, and it instills confidence, then you can plan and overcome just about any other negative a sled may have. The Alpha One is possibly the most predictable sled in deep snow and in a sidehill of any sled currently made. However, like anything else, you need to get used to it.

When the Polaris AXYS came out, many people ‘over-rode’ it, yours truly included! What I mean by that is that in situations like initiating a side-hill, I counter-steered and actually leaned too much, and pulled the sled right over. There is no need to hang all the way out off the board and pull your arms off, in order to negotiate challenging lines. Much of it can be done with easy foot movement and weight shifting. That’s awesome, in particular for shorter riders who may not have the leverage that those lanky, wiry, tall dudes automatically have.

Another huge advantage of the Alpha One is that this single extruded aluminum beam does not hold snow like a traditional rear suspension does. There is simply very little opportunity points in this skid for snow, slush, or ice to build. Snow actually moves through this suspension. Cat ambassadors have several videos out on the old interweb, already showing how Cat sleds in the Ascender platform did not hold as much snow, making ‘riding weight’ was actually lower than other mountain sleds. With the Alpha One, this big advantage only increases. There’s a lightweight, front mounted heat exchanger that helps with this as well, since it does not run the entire length of the tunnel. Less weight means less effort, which means more deep snow performance and more fun! 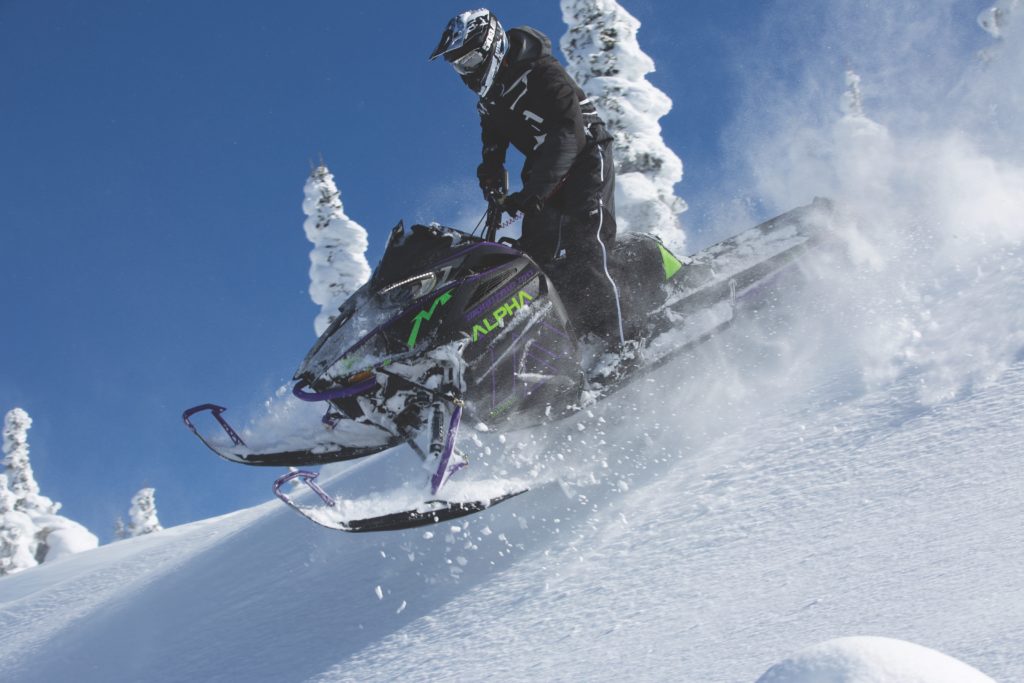 The new Mountain Cat also comes with Arctic’s new Mountain Drive System. It seems like clutching changes almost every model year, and it is hard to keep up with. However, the big takeaway here is that the CVT has a 12.5 percent lower effective starting ratio (while maintaining the top ratio). That means engagement is super smooth for all those times you are about to try to pull a precarious downhill side-hill and hook back up the hill. If you’re like me, you’ve accidentally grabbed just a tiny too much throttle there, and put yourself into a creek-bed. Again, it is all about predictability and that’s what this clutch gives you. There’s also reduced belt wear at drive-away speed, and this clutch auto-adjusts belt tension too… no more filthy black hands from adjusting manually.

A few more little goodies this sled has on it standard included a 12V DC adapter, Hayes Stealth master cylinder brake system, ice scratchers standard, and my favorite mountain grab bar in the industry. Finally, all new ProClimb 7 G2 skis have an aggressive keel, traction on the tops for boots, tapered design and new rubber dampener that is said to keep the skis from diving. This sled has a big 2-inches of ski stance adjustability too, so you can be more stable on the trail if you’d like. That was a big concern for many of us riders, but the Alpha One can certainly spend time on the trail without a problem. New hand controls are more intuitive as well, but I still know a lot of mountain riders who would rather have these on the console.

Should you expect to enjoy 200 mile trail rides on the new Mountain Cat Alpha One? No, but that’s not what it was made for. Should you expect it to be the best sled in the world, in set-up spring snow? I probably wouldn’t, but again, that’s not what it was made for. Is it possibly the best new deep snow and technical terrain platform on the market now? I would put a couple dollars on it, but Polaris and Ski-Doo will no doubt be gunning for Cat next year in the mountains!

When pictures of the Alpha Cat hit social media, I was a little skeptical. My other mountain riding brethren have told me for some time that they prefer a rigid skid frame rail that does not articulate laterally like Ski-Doo’s tMotion. These guys believe, possibly with good reason, that a standard two rail rear suspension does not wash out as much as the Ski-Doo tMotion and FlexEdge track.

I skimmed through hundreds of comments, especially those with photos of the single rail snow machine to see what some riders’ first impressions were. Many hardcore ‘weekend warriors’ were certain that Cat’s new mono rail design was in fact ‘junk’. I read comments like ‘it will not hold a steep side hill to save its life’, and ‘it definitely won’t hold up to the abuse’ that these small-town heroes supposedly put their sleds through. 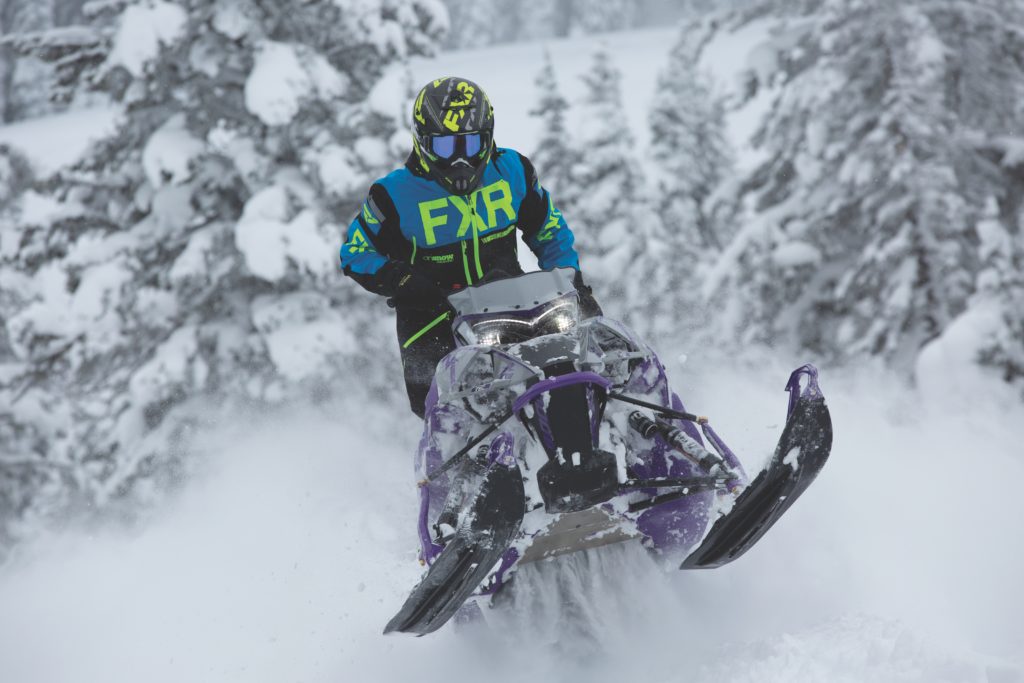 After months of wondering what this sled was actually capable of, what the handling felt like and wondering if the naysayers might be right… the day finally came. I got to throw a leg over the Alpha and take her for a rip! I put all of the opinions I had read and heard aside and just rode like I normally do. Right away I could feel a difference while riding up the bumpy trail. The firm yet flexible edge of the track smoothed the rough road right out when I wasn’t perfectly perpendicular to the bumps.

We made our journey up the trail to the big slopes, and that was where I really put this sled to the test. Everything negative I had heard about this agile Alpha was proven to be false, and the proof was in my riding! This sled is so incredibly easy to initiate a side-hill maneuver on one ski, that I instantly noticed my physical effort was allowing me to choose new gnarly lines through thick tree-filled slopes, instead of focusing on wrestling the machine around. The Alpha will spin around on a dime, while you’re feeling 110% in control.

Side-hilling across old frozen trenches and getting tossed off of your sled is a thing of the past, I never experienced any wash-out on wicked, steep mountain sides. It felt solid, well-built and durable in my opinion. This sled will advance a beginner mountain rider’s abilities in a much shorter time, due to the smooth and almost effortless handling. I think intermediate/highly advanced level riders will only take their skills to the next level, because this kitty makes you feel young again! The strong chassis, newer engine and narrow body panels, combined with the all new mono rail design, makes the Alpha pin the thick woods. – Tyler Swarm