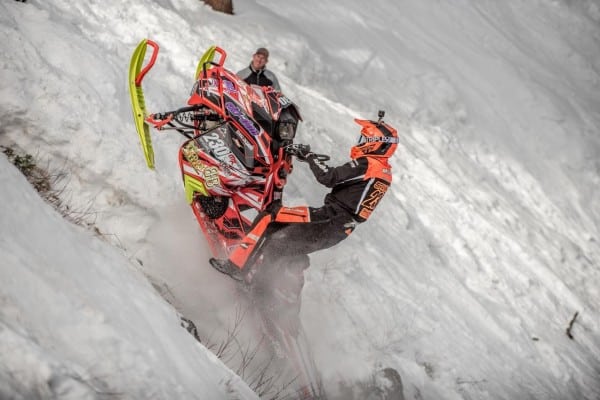 Seems nearly everyone was a winner at this year’s Jackson Hole World Championship Hill Climb; while Polaris swept the stock classes and Arctic Cat claimed the top crown King of Kings, Ski-Doo racers Blaine Mathews and Carl Kuster took home their own share of the hardware over the weekend. Mathews won the Improved Stock King of the Hill title along with the Rick Ward Memorial Sportsman Award. Kuster, who had given up racing except for Jackson Hole, showed he still has the goods with a win in Pro Masters Mod. Here’s the official release from Ski-Doo:

Mathews has been riding a wave of momentum heading into the event and kept it rolling by winning the 800 Improved Stock and Open Mod classes. To put an exclamation point on it he also took the Improved Stock King of the Hill award and the Rick Ward Memorial Sportsman Award. Kuster made it a worthwhile return to Jackson for his once a year competition in the US, after a hand injury kept him from competing in any events last season, with a win in Pro Masters Mod class.

The hill at Snow King Resort always provides some of the toughest challenges in the world of snowmobile hillclimbing, and this year was no different as many competitors left high marks rather making it to the top for an elapsed time. Racers qualified throughout Thursday, Friday and Saturday for the chance to race the finals on Sunday, and a win on Sunday qualifies them for a shot at the King of the Hill title. Mathews had two shots and converted one into a win, while Kuster couldn’t take the start as damage from an earlier crash couldn’t be repaired in time.

Congratulations to all the Ski-Doo X-Team racers and best wishes as the Hill Climb competitions continue into late April.