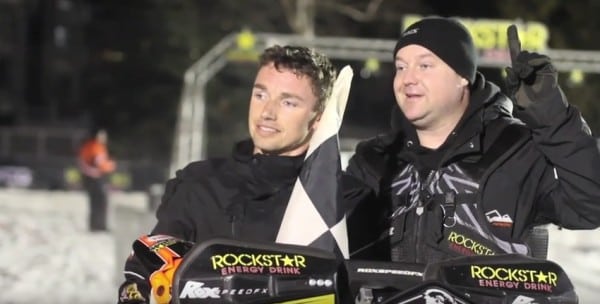 With just two races remaining on the Canadian Snowcross Racing Association (CSRA) tour, seven-time champion Iain Hayden was once again leading the Pro Open field. However this time he had company as Colby Crapo continued to nip at his heels just two points back. Colby started the season with a victory only to watch Hayden grab three wins in four races and in the process capture the lead going into the final two races. The battle for the 2016 CSRA Pro Open crown proved to be one of the closets in recent history and the two man fight went down to the wire as CSRA held three races at the Horseshoe Valley Resort to determine the year-end champ. In the end it was Hayden who stood tall once again, winning the Pro Open final both Friday and Sunday and finishing runner up on Saturday. It was more than enough to earn Iain his 8th CSRA Year-End Championship as Crapo struggled on Saturday with a 6th place finish while also collecting a second and third the other two race days. Check out the video from Rockstar OTSFF Polaris race team as they followed the team along throughout the long three-race weekend.