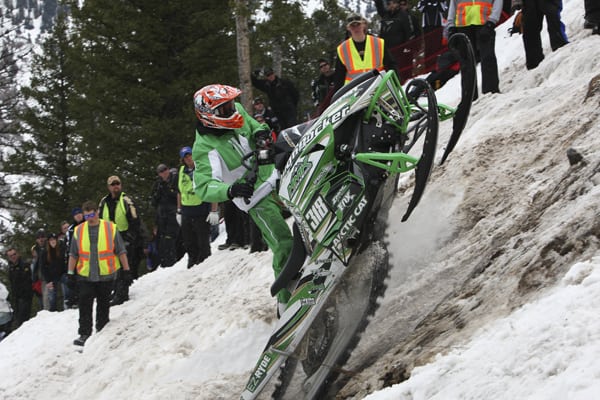 The kids at Arctic Cat were stoked after capturing the King of Kings crown at the 2012 Jackson Hole Hill Climb… here’s their post race release:

It was a beating of epic proportions at the World Championships of Hillclimbs in Jackson Hole, Wyo., as Team Arctic racers out-climbed the competition to score 10 victories by six different riders, including two podium sweeps. The star of the weekend was Kyle Tapio, whose record-breaking performance aboard the 2012 Arctic Cat ProClimb produced two class wins; both the Improved and Mod King titles; and the ultimate King of Kings crown.

Facing the steep and wickedly-challenging Snow King mountain aboard Arctic Cat M sleds, Team Arctic racers notched victories in every category, from 600 to 800, and in Stock, Improved and Mod classes. Jeremy Archibald started the ball rolling by leading a podium sweep with Chance Buckallew and Ben Adams in the 600 Improved class. That was followed by another podium sweep in the 700 Improved final, this time by Rob Kincaid, David McClure and Archibald. Then Tony Zollinger claimed victory in the 700 Mod final

Having dominated the Women’s classes for several years, Team Arctic’s Amy Zollinger, Jan Ottobre and Christy Frisby once again put on a winning clinic at Jackson Hole, with Zollinger claiming the Stock class (where Frisby took third) and Ottobre winning Mod and taking second in Improved, all on M8 HCRs.

In the big iron classes it was time for Kyle Tapio to reinforce his hillclimb legend status. Piloting his M8 HCR, Tapio won both 800 Improved and 800 Mod in convincing fashion. If Tapio felt any disappointment for taking third in the Open Mod final, he more than made up for it in the King competition, where the class winners in each category race for overall status. There, Tapio not only won the Improved and Mod King titles, he also scored the overall King of Kings crown as the best racer of the weekend.

“Team Arctic racers and crews did an outstanding job at the World Championship, especially the incredible performance of Kyle Tapio, who was in a class by himself at Jackson,” said Arctic Cat Hillclimb Coordinator, Al Shimpa. “Ten victories by six different racers is a testament to the depth of our team and the strength of our M machines.

“In addition, I’m especially proud of Rob Kincaid, who finally knocked the monkey off his back to win his first-ever pro class World Championship in 15 years of competing at Jackson. And I’d also like to thank the Speedwerx crew, who worked extra-hard to ensure the success of most of our Improved and Mod-class machines.”