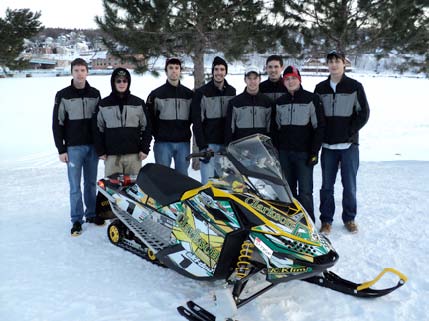 Ski-Doo was happy with the young adults at Clarkson University who won their second consecutive Society of Automotive Engineers (SAE) Clean Snowmobile Challenge. The 2012 winning team utilized a Ski-Doo MXZ 600 ACE model as the foundation of their winning sled. Here’s the official release from Ski-Doo.

Valcourt, Québec, March 30, 2012 – A BRP Ski-Doo snowmobile was selected and adapted by Clarkson University to win their second straight Society of Automotive Engineers (SAE) Clean Snowmobile Challenge. Ski-Doo models were also chosen by the second and third place teams in the internal combustion category and the winner of the Zero Emission category.

The snowmobiles entered are judged on many criteria, including emissions and noise, but they also have to be functional machines that can be trail ridden, so handling, comfort, endurance and the ability to pull loads factor in also.

Clarkson started with a Ski-Doo MX Z model featuring the Rotax ACE 600 engine, already known for its efficiency, and modified the fuel and ignition systems to automatically run on ethanol blended fuels that ranged from zero to forty percent ethanol alcohol. They then added a compact, one-of-a-kind catalytic converter they designed to further clean up emissions. In taking the overall championship, the team also took honors for Best Handling, Quietest, Best Ride,Best Value – which accounts for price, fuel economy and performance – and Most Practical Solution – which balances cost and noise reduction.

“Congratulations to Clarkson for winning their second Clean Snowmobile Challenge, and thanks to all the teams for their hard work in advancing technologies for our sport,” stated Robert Lumley, vice president, sales and marketing for Ski-Doo snowmobiles and Sea-Doo watercraft, North America division. “The fact that so many successful teams started with Ski-Doo snowmobiles speaks volumes about the technologies already incorporated in our products, and who these young leaders see at the front of the pack.”

Placing second was Kettering University using a Ski-Doo Renegade model also equipped with a Rotax ACE 600 and in third was the University of Wisconsin Platteville using a Ski-Doo MX Z model with the Rotax E-TEC 600 as their starting platform.