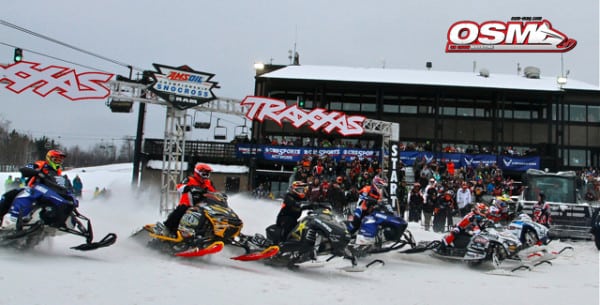 On Snow Magazine made the trek to the port city of Duluth Minnesota for the 22nd year in a row this past weekend. The race has become a rich tradition for many of us, and personally I have NEVER missed a trip to the now signature kick-off race of the season. Here’s what we saw.

1) The track was big…real big considering the postage stamp size of the entire venue and bunny hill the track builders and snow makers have to work with. A new starting location at the bottom of the hill worked well with nary a restart throughout the entire weekend.

2) There’s parody on the track right now, at least when it comes to the sleds. Take Yamaha out of the mix, and the other three brands look way equal in terms of performance, holeshots, turning, and bump compliance.

3) Oh yeah Yamaha, I know, I know…they were testing for the cross-country season. But so were about 12 other teams during the Duluth weekend, on a lake somewhere in northern Minnesota. The first cross-country race of the season is on Pine Lake, a high speed, go like hell for a mile and then turn kind of race. Am I the only one confused?

Lindbom along with Taylor and Piche were at Duluth putting in practice time on their blue buggies before the cross-country season kicks off in less than a week.

4) The announcers were bad…way bad that was until long time snowmobile announcer Mike Schroeder came to the rescue on Sunday. I’m not sure if the social feedback got so bad that they “had” to call Mike in to save the day, or what. But those other guys wouldn’t know the difference between a drive clutch and an anvil.

5) Tucker Hibbert is on another planet when it comes to snocross racing. To say he dominated would be an understatement. Plus consider this…next year he will also qualify to race the “vet” class.

6) The crowds at Duluth were jammed on Saturday, with Sunday perhaps being a bit lighter than what we are accustomed to. Then there was Friday night…seriously; the AMSOIL Dominator race is in a word, boring. Other than a few highlights including Cody Thomsen and Logan Christian, please bring back the Winter X Game qualifier or maybe a hot dog eating contest… both are more entertaining.

He is still the man…maybe more so than ever before.

8) Hibbert aside, we may have seen the first inklings of the changing of the guard in the Pro ranks with Kyle Pallin, Cody Thomsen, and a strong run by Logan Christian highlighting the speed and consistency of this next generation of racers. Congrats to those kids.

9) The Pro Open field is getting thin. At Duluth there were 23 riders looking to score one of 15 spots in the final. Now consider three of those sleds were Yamaha riders out for a test and tune session and Iain Hayden will be traveling back to Canada to race in the CSRA series and the field is already down to 19. Throw in an injury or two and qualifying will be a moot point.

10) We’ve bantered back and forth here in the office on the questionable black flag call on Cody Thomsen in Sunday’s final. Running side by side with Tremblay heading into the downhill turn, the two riders rubbed and Tremblay (who was on the unfavorable outside line) high sided. We call that racing for position, ISOC saw it differently and gave the favorable nod to Tim and his AMSoil wrapped buggy. Hmmm, aren’t they the title sponsor too? Coincidence?