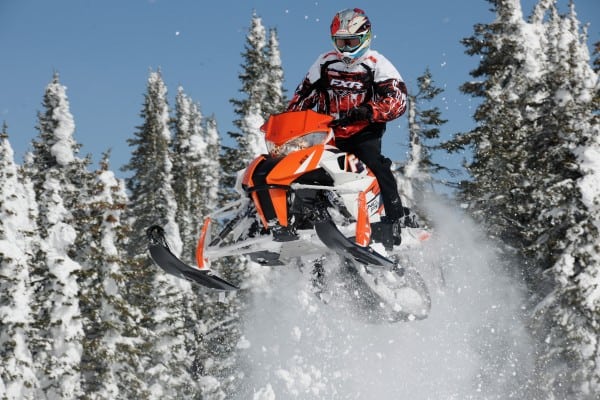 In our last installment of the big bore trail performance feature, our critical butts review the Cat F800 in SnoPro trim.

– Bourgeois – The saying goes you have one chance to make a first impression, and last winter was Cat’s chance to set the tone for their new ProCross chassis performance buggy. No doubt, the F800 Sno-Pro has the ability to empty a watering hole in short order. Maybe it’s the loud and proud Cat graphics and paint scheme, or it could be the true to form loud Cat exhaust note, or perhaps it’s the way the Cat crew never apologizes for putting function over form. Whatever it is, last year’s F800 was off to a good start. When it came to posing, the buggy knocked it out of the park, but the performance delivery fell a little short of expectations. Handling aboard the big F in 2012, calibrations felt slightly nervous and somewhat vague, especially at speed. The rear suspension wanted to rock on the front arm, while less than pure positive bite up front kept cornering speeds a few tenths below our expectations. Admittedly, it’s tough to come out of the box in year one and deliver a knock-out punch, which is why the 2013 version is refined with subtle tweaks to make the package a bit sharper without losing Cat’s rough shaven reputation.

– Erickson – Year two of the F brings louder “look at me” paint and graphics that is a perfect match to the obstinate manner of the Sno Pro 8’s engine and in-yer-face attitude; call it an emotional benefit the other machines aren’t able to offer. While I believe there is more to harness from this chassis to improve its handling (needs to steer quicker) and corner feel from the front, (see Boo-gee’s note about “vague”) if the handling between handlebars and carbide is better matched to its magnificent performance in bumps, the Sno Pro will better impress. The bump stability comes from a long-feeling footprint and wheelbase, and suspension well composed. The Sno Pro seems to have taken a lesson from the French Canadian manufacturer and given the Slide-Action rear skid a damping package that appeals to variety of riders. But not all riders will love that it’s a menacing machine – especially those just inches off the snowflap of whom they are following. There is enough brash character in the newest Sno Pro 8 to put your riding crew in a fetal position, begging for mommy, and the intake howl induce a willingness of go-fast throttle usage.

– Urquhart – It’s hard to talk about the F800 Sno-Pro and not reference the slightly more ominous F800 Sno-Pro RR. Besides, if you’re looking at a Sno-Pro, you’re already a “go big or go home,” turn-it-to-11 type rider and you’re probably thinking, “Why not get the RR?” Well, here’s the scoop: when I ride the F800RR, it’s too much – it’s too stiff and the speeds it wants to be driven are faster than I want to go on public trails. The F800SP is one notch down from the extremeness of the RR, and that makes a world of difference. The RR needs to be ridden hard, and if you don’t push it, it pushes back. It fights you through the corners and beats the crap out of you as it bucks and broncs you through any set of bumps the trail serves up. On the other hand, the Sno Pro steers in nice and soaks those bumps up like it’s trying to be nice to you. The RR’s world is tinted with a red haze of aggression and its path is littered with empty cans of Red Bull (or Monster for you T. Hibbert fans). The Sno Pro’s world is bluebird, with fresh, glittering pow and buddies just having fun. Maybe if I was hucking ramps with some irreverent “neckers” at the freestyle shows and chasing Brian Dick at the cross-country races, I’d opt for the RR, but for what I do, the Sno Pro is way more than capable.