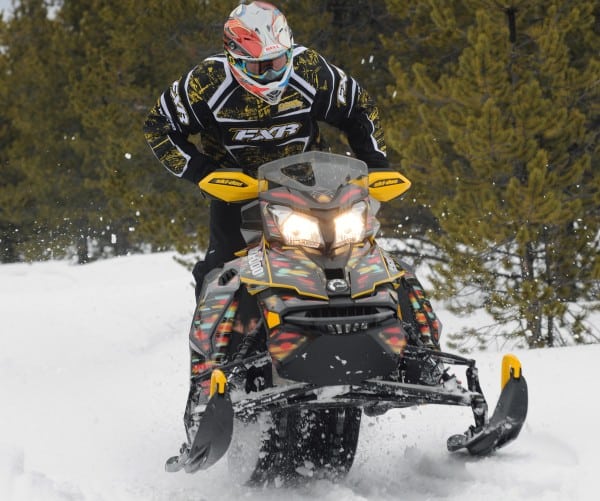 In our next installment of our big bore review of the 2013 trail performance sleds we take a look at the Ski-Doo MXZ-X 800, as our “manly” editors – Pat, Tim and Jim give their critique on the new look big E-Tec.

– Bourgeois – I’m a bit disappointed in the new look REV, mostly because it looks so much like the previous version. From across the parking lot, I watched gawkers barely give the new look REV a second look… what the?? When I shell out big coin for the next big thing, I want to stick out like a chuck of rare steak at a vegetarian convention. Instead, the next generation REV is more of a refined and sculpted version of the one that came before it. Nonetheless, just as the black and yellow buggy has in previous iterations, it still makes big girls cry due to it ominous looks and small boys cringe from its on-trail performance. The rMotion skid works, and those cool knobs hanging on the running board add serious pit points…oh, and they do serve up easy to make adjustments too. Coupled with ETEC fuel delivery, improved fit and finish, and a glove box to stow your candy cigarettes and Big League Chew, the new look REV is every bit as good as the old look REV, only better.

– Erickson – Cue Bob Segar. Bear-na-burt-n-bow-now … I love to watch her strut. And the reason why the MX-Zed can strut its stuff? No surprises here because it’s been said before – it’s the most confident and flickable handling package with its quick steering, predictable corner grabbing, and ease of movement in the saddle. Model year 2012 or 2013 – it makes no difference in ride and handling, so don’t upgrade on looks alone. But if you want the benefits of the latest and greatest, opt for the subtle revisions of the “layered” look of the new cab. Ski-Doo has pride in its design staff and its ability to integrate the latest design themes from other areas of motorsports. Model years prior to ’12 also leave owners without the latest rear suspension that BRP’s engineers tout as a truly progressive, rising rate damping package, (it works splendidly) and the uber-kewl adjuster knobs. As for its engine, the 800 E-TEC is not the oil sipper its 600 little bro has been, and unless you’re thrilled about rebuilding top ends, it likes the spendy BRP mineral oil. While I think this is the best of the testosterone squad here assembled when it comes to ride and handling, some potential buyers may want to fully explore the cost of ownership in with their X-Team inclusion.

– Urquhart – It’s lonely at the top, and I’ll tell you what; Ski-Doo didn’t get there by building junk. The yellow sleds are packed with technology and new ideas, and frankly the rest of the industry is still playing catch-up (or pretending to look the other way while knocking-off technical nuggets). Take the MXZ-X package for example. The overstuffed looking seat, far forward footwells, and ultra-low windshield make the X package MXZ feel awkward while sitting and posing at the gas station. Throw in the almost tractor-like sound from the E-TEC engine, and you are left with the impression the much ballyhooed yellow buggy is neither adept nor fast. But once you start riding, everything seems to fall into place, and simply put, the thing works better than any buggy on snow. The E-TEC runs like a sewing machine on C14, the rMotion skid makes butter out of any rough trail, and the front end might as well be on rails. Want more? How about the myriad of little things the sled does right such as slight engine braking from the E-TEC that kicks in (almost always at just the right time) when the sled backshifts. It’s hard to fault this sled for anything, so I won’t.

Later this week, watch for the final installment in the Testosterone 150 review, as we talk up the Arctic Cat F800 SnoPro.