Brooten, Minn., is an unlikely place to begin any sort of manufacturing operation. Boasting just 700-some people today, it’s a small town in Central Minnesota that was likely smaller in the early 1970s. But John Bohmer, who was president of the Bonanza Valley State Bank at the time, wanted to bring manufacturing and jobs into Brooten to try and help build the community. Bohmer somehow found Gerry Reese, a talented engineer who had become frustrated with his job at Polaris.

Reese felt he could build a better, faster snowmobile but the management at Polaris didn’t think consumers wanted a racier sled. Bohmer happened to find Reese at a time when he was searching for new horizons, and originally the pair came up with the idea to build machines that could haul freight in Alaska. When that idea didn’t pan out, the pair set their sights on building sleds. Reese wasn’t the only Polaris engineer who jumped on board with Brutanza. Polaris recruits included Mike and Charlie Baker, Marly Duclo and Greg Grahn, giving the upstart company a deep knowledge base. That was 1971. They released their first sled the next year and by 1974 it was over, at least from a strictly Brutanza-built standpoint. Scorpion bought the brand and produced a Scorpion Brut, and the next year they branded it for Massey Ferguson.

The sleds Brutanza built were in many respects, way ahead of their time. In fact, a number of the concepts they pioneered didn’t reappear until decades later and are now seen as cutting edge ideas. The company only built about 1500 sleds during its original three-year run, and considering there were 130 snowmobile manufacturers in 1969 and still more than 100 by the time Brut came along, it’s not hard to see how they got lost in the shuffle. Regardless, the spec sheet for the sleds read like one from a modern snowmobile.

The engine was designed to sit low in the chassis and was hand built with parts designed by Brutanza and sourced from Japan. Liquid-cooling wasn’t new to snowmobiles, but it was new from a mass-production standpoint. Brut engineers figured their engine would produce more consistent power if they could keep it at a fixed temperature. A CDI ignition meant less plug fouling and better reliability. The Power Pac system tied the driveline together, eliminating any misalignment in the drive system, vastly improving efficiency and belt life.

Since their engine didn’t rely on air to cool it, it didn’t have to “stand up” in the chassis, so they were able to tilt the cylinders down for a lower center of gravity, essentially creating the first “lay down” snowmobile engine. This left no room for the steering post, so they routed that over the engine, a configuration common in today’s rider forward sleds.

Instead of a big, expensive radiator, Brut engineers went with a system of coils in the tunnel, but these proved fragile and the solution was to mount an extrusion on each side of the tunnel. They also went with aluminum for the tunnel at a time when the majority of snowmobile manufacturers were still using steel. Their slide rail skid was fully adjustable and had a progressive shock system. Even the track was gone over by Brutanza’s engineers – the Polytrack was a one-piece molded unit that was produced by Gates, and designed for speed and drive efficiency.

Brutanza wasn’t shy about their new to the market advancements and bragged in their sales literature that their sleds were the fastest on the block. The company’s engineers claimed they clocked one of their sleds at 118mph, but more conservative numbers said the sleds would do 80mph out of the crate. At a time when most sleds were lucky to do 60mph, this was blazing fast. In fact, Bruts were so fast their reputation preceded them, and many race organizations considered outlawing the sleds before they even had a chance to race.

The sleds sold like crazy. But a couple of low snow years and the gas crisis put a serious damper on their momentum. Because of the RPMs the engines pulled, the sleds were plagued by clutch failures. Finally, after the 50th clutch exploded, Brutanza’s insurance company told them they had to recall all the sleds. It was the final nail in the coffin and the company sold out to Scorpion. Reese, one of the founders and driving forces behind the company, started making skis for airplanes. Charlie Baker started a repair business in Brooten, and Grahn ended up back at Polaris.

The Brut in these photos was donated to the Snowmobile Hall Of Fame in St. Germain, Wis., by the Dan Hill estate. It is currently on display there. To learn more and to plan a visit of your own, check out their website at www.snowmobilehalloffame.com 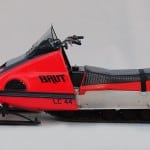 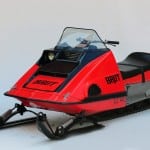 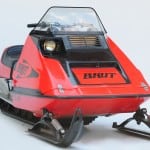 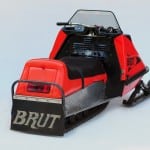 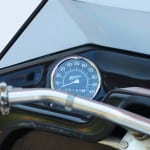 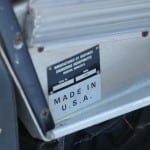 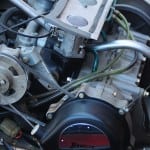