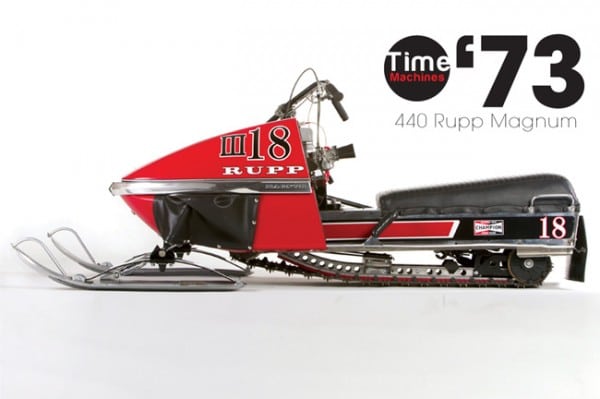 While Edgar Hetteen and David Johnson were busy building Arctic Enterprises and Polaris into snowmobile empires, Mickey Rupp was busy doing the same thing in the not-so-likely location of Mansfield, Ohio. Son of pump-builder Herbert Edmund Rupp, Mickey inherited his Father’s gift of entrepreneurship, but he also had a knack for speed and a gift for engineering. These three things would allow Rupp to carve his place in snowmobile history.

Born in 1936, by his early twenties Rupp was not only an accomplished racing kart driver, he had started building his own line of racing karts. Founded in 1959, Rupp Manufacturing began by building Dart Karts. Dart Karts used a flexible frame; something that all racing Karts use to some extent to this day. Rupp’s Dart Karts were fast and quickly became the Kart to have on the racing circuits. In 1960 the company began making mini bikes, and by 1964 it had built a few prototype snowmobiles. The next year, Rupp built 500 snowmobiles, which officially put him on the growing list of snowmobile manufacturers.

In his time away from his growing company, Rupp was furthering his racing career, moving from Karts to the USAC Championship Car series. In 1965 Rupp qualified 21st for the Indianapolis 500 and finished 6th just behind Gordon Johncock. His experience in such lofty racing circles was teaching him about materials and the advantages of building a machine as an overall package. As a result, Rupp snowmobiles benefited early on from the use of lightweight aluminum construction, as well as having the engines spec’d out by Rupp and built by Tohatsu.

By 1971, Rupp employed 850 people; boasted a 180,000 square-foot manufacturing facility; a research facility; proving grounds; styling center and was building karts, mini bikes, ATVs and five different models of snowmobiles. In addition, Rupp was director of the International Snowmobile Industry Association. The company was definitely slotting itself as one of the big dogs in the industry, but low snow and too many sleds in the manufacturing pipeline led to bankruptcy. In April 1973, Rupp was sold to an investment group led by a guy named Joseph Hrudka of Mr. Gasket fame. The company’s partnership with Tohatsu would end the same year, and a switch was made to Kohler engines.

In 1967, just when Rupp was elbowing its way into the snowmobile market in a big way, Gene Bloom began racing Rupps as a semi-independent. Bloom showed up at Ironwood in 1969 and caught the eye of Rupp’s factory brass with his talent, fierce competitiveness and, of course, because he was on a Rupp. Next thing he knew he was signing a contract to race for the factory. It was a good move on the part of both parties because Bloom proved to be a talented racer and stayed loyal to the Rupp brand until its demise in 1976. Perhaps Bloom’s best season was 1972, when he won seven of nine races to claim the championship. At Ironwood that year, he won the 440 class, beating a huge field of factory and independent riders.

In the early and mid-1970s, the machines Rupp put on the race track made extensive use of magnesium, aluminum and chrome moly. The brand also boasted some of the best engineering minds in the sport, including Lyle Forsgren (who later worked at Mercury after being fired by Mickey Rupp) and Tedd Pierce, Bloom’s brother-in-law. The Rupp factory team proved to be a small, but formidable opponent to its competitors.

The 1973, 440 Rupp Magnum pictured here is owned by Bill Stull, and was one of four raced by Bloom during the 1972-73 season. The Rupp race team had four riders going into that season, but on the way back from the first race in Ironwood, the team was informed that the company was in dire financial troubles and things would have to be cut. Bloom and John Binkley were retained as riders, and the other two riders were let go. With two fewer riders, the team suddenly had more sleds to work with, so they took the opportunity to outfit them with multiple setups that included wide and narrow front ends and various track lengths. Bloom is pictured on at least four different 440 Magnums in 1972-73, and he confirmed that he did ride multiple 440 Magnums during that season.

The engine in this sled is stamped “Gene Bloom” and also has a number “7” stamped in it. Leading into the season, the Rupp team would pull the Tohatsu engines right off the assembly line, port and modify them and run them on the dyno. If it didn’t work, they would grab another one and start over. Bloom says the number 7 probably meant it was the seventh one he dyno’d. It features many tricks including porting, the crank was drilled to lighten it up and to balance it, and the pistons have spiral cuts in the skirts to help carry lube. The sled features magnesium suspension parts and a magnesium steering support. Of the four 440 Magnums Bloom raced, some had rubber tracks and some had cleats. This sled has an aluminum-cleated track.

While it may have been raced at other events, this sled has only been confirmed to have raced once, but that race was a big one. Headed into Beausejour in March of 1973, Gilles Villeneuve had been one of the most dominant riders during that racing season. He was set to sweep the Mod finals in 340, 440, 650 and 800 that weekend. His sweep was ruined when Bloom beat him with this sled in the 440 Super Mod final. Not only did Bloom beat one of the best riders ever in Villeneuve, he beat him with his mid-mount Rupp, whereas Villeneuve was on a front-mount Alouette – a far better machine.

Ironically, Stull found this sled while racing in Beausejour in 1998. The guy who owned it had bought it straight from Rupp after the 1973 season. He saw Stull racing another 440 Magnum and asked him if he wanted to buy a Gene Bloom 1973, 440 Magnum. The guy knew what he had and wanted a lot of money for it, but Stull wanted the sled bad, so he ponied up the cash and bought it the following year when he returned to Beausejour. Stull restored the sled himself over a three month period. He’s talked extensively with Gene Bloom and Bloom has verified the sled as the real deal. It is currently on display at the Snowmobile Hall Of Fame in St. Germain, WI. 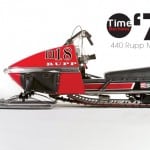 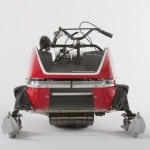 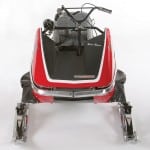 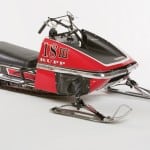